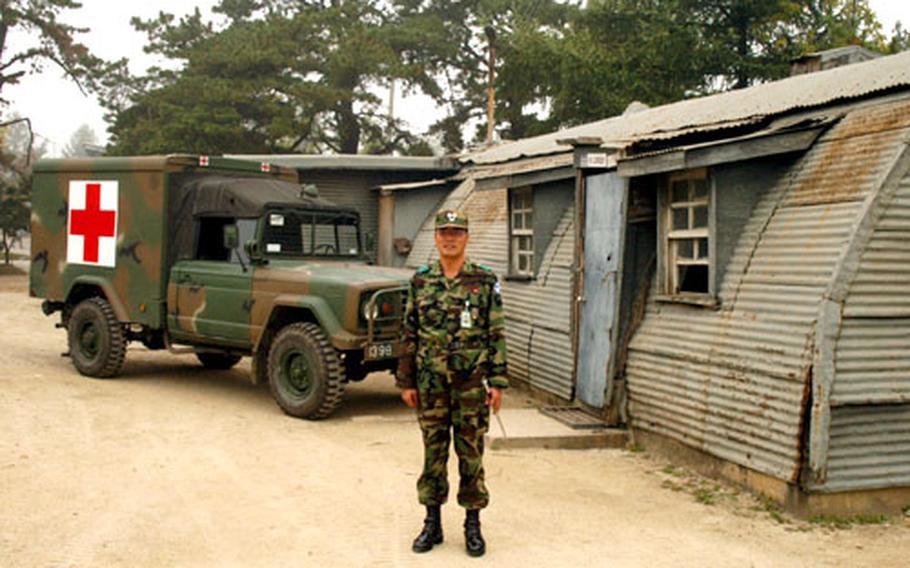 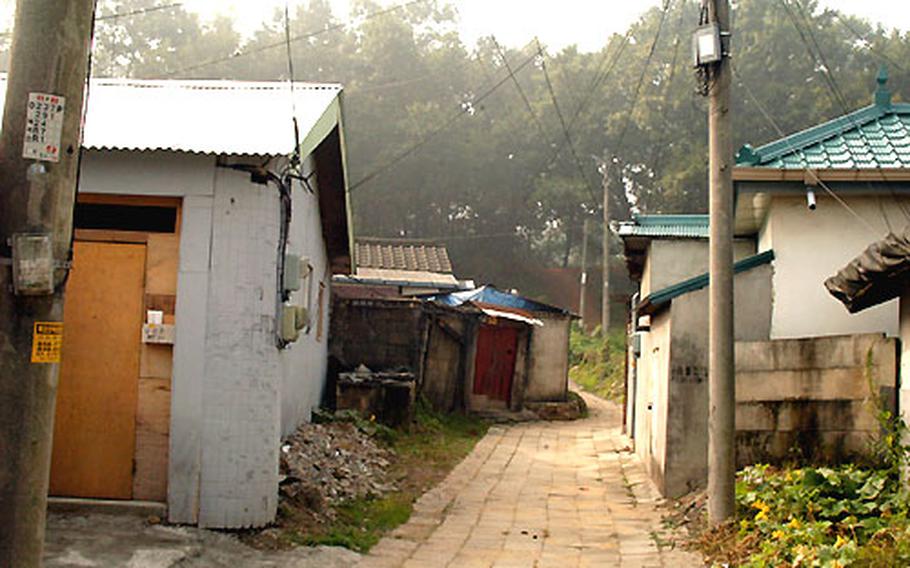 Rosie&#39;s Bar, left, was closed in 1979, when Americans handed over Camp Mosier to the South Korean army, and recently was converted into low-rent apartments. (Seth Robson / S&S) 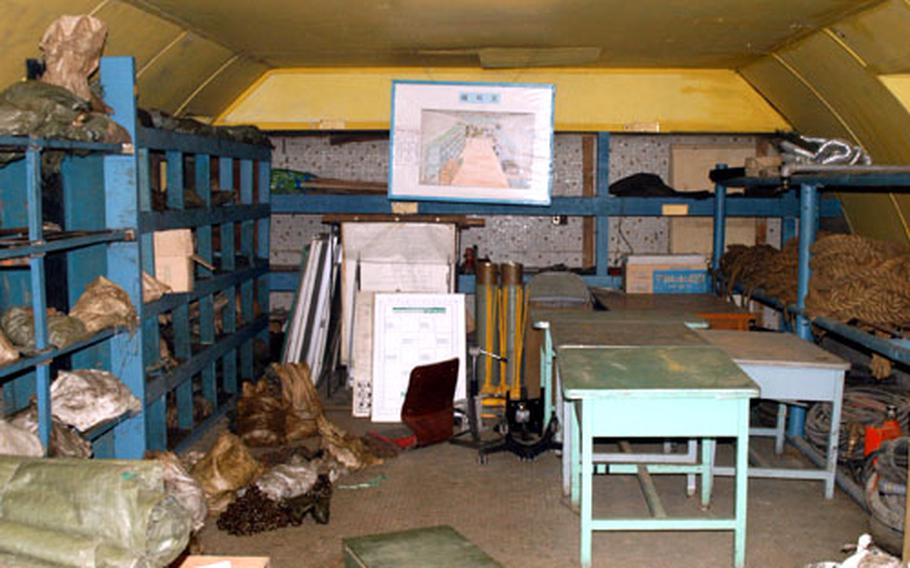 The operating theatre inside the MASH hospital at Camp Mosier is now used by the South Korean army for storing equipment. (Seth Robson / S&S) 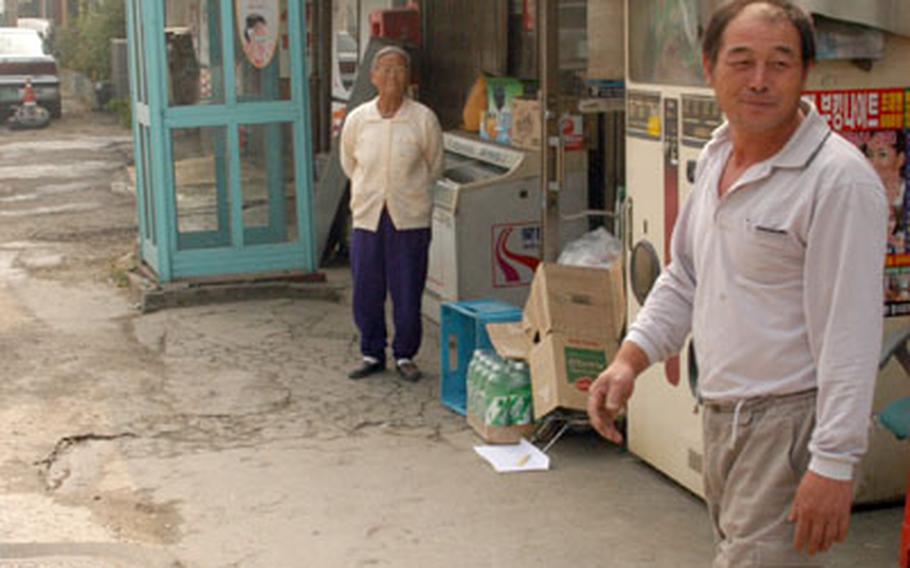 South Koreans Kim In-Nae, left, and Kang Yong-I live and work near the former U.S. base that inspired “M*A*S*H,” but neither have heard of the book, film or television series. (Seth Robson / S&S)

From the Korean War until 1970, Camp Mosier, near Uijongbu City, South Korea, was the home of the 43rd MASH. The unit was the subject of the book by U.S. Army surgeon Capt. H. Richard Hornberger, which inspired the popular movie and television series of the same name.

Camp Mosier was handed over to the South Korean army in 1979, but today the Quonset hut that served as the MASH hospital still stands along with other huts used as barracks when the MASH unit was there.

&#8220;We are not concerned with the ultimate reconstruction of the patient. We are concerned only with getting the kid out of here alive enough for someone else to reconstruct him. Up to a point we are concerned with fingers, hands, arms and legs, but sometimes we deliberately sacrifice a leg in order to save a life, if the other wounds are more important.

&#8220;In fact, now and then we may lose a leg because, if we spent an extra hour trying to save it, another guy in the pre-op ward could die from being operated on too late. Our general attitude around here is that we want to play par surgery. Par is a live patient,&#8221; he wrote.

Today the MASH hospital at Camp Mosier is a rusting shack used by the South Korean army to store old equipment.

2nd ID Museum officials want to bring the Camp Mosier MASH hospital Quonset hut to Camp Red Cloud to house part of the museum&#8217;s collection, but the project has stalled due to budget constraints, they said.

He said the South Korean army might tear down the former MASH hospital since it is in such a state of disrepair, but would return it to the U.S. Army in exchange for alternative storage space.

Cho has never heard of the MASH book, television series or movie, but he knows where Rosie&#8217;s Bar is. The bar is familiar to millions of television viewers as the local watering hole for such memorable characters as Hawkeye, Klinger, Radar and Hot Lips.

Rosie&#8217;s Bar, which is down an alley just outside the front gate of Camp Mosier, recently was converted into several one-room apartments. Written material at the 2nd ID Museum states that Rosie, the bar&#8217;s owner, moved to the United States after the base closed.

Residents say the area around Camp Mosier used to be a thriving nightclub district with the same atmosphere as Tongduchoen&#8217;s Toka-ri, near Camp Casey, or Itaewan&#8217;s Hooker Hill, near Yongsan Garrison in Seoul.

Shop owner Kang Yong-I, 51, said the alley where Rosie&#8217;s Bar used to be is particularly popular with prostitutes.

However, since the Americans left, the neighborhood has reverted to a mostly residential area with a few shops. The reason Rosie&#8217;s Bar was not demolished years ago is because the area is part of Uijongbu&#8217;s green belt, meaning it is difficult to develop the land there, Kang said.

One of the neighborhood&#8217;s oldest residents, Kim In-Nae, 78, remembers when Camp Mosier was a collection of tents surrounded by wire. During the Korean War, she fled south as the Chinese and North Koreans advanced on the city, then returned to find that the Chinese had used her family&#8217;s toilet pot to cook their rice, she recalled, laughing.

Across the road from Camp Mosier, there is a small hill and a path leading up to a helicopter pad. The helicopter pad was used for the opening scene of the &#8220;M*A*S*H&#8221; movie, according to a soldier quoted by Stars and Stripes in a 1979 article about the handover of the base to the South Koreans.