Buddhist priests from the Engakuji Temple in Kamakura weren&#39;t bothered by the traffic rolling past the Hakusen-An Memorial Wednesday across from Yokosuka Naval Base&#39;s Fleet Theater, as they chanted a commemoration to the monument. (Allison Batdorff / S&S)

Buddhist priests from the Engakuji Temple in Kamakura weren&#39;t bothered by the traffic rolling past the Hakusen-An Memorial Wednesday across from Yokosuka Naval Base&#39;s Fleet Theater, as they chanted a commemoration to the monument. (Allison Batdorff / S&S) 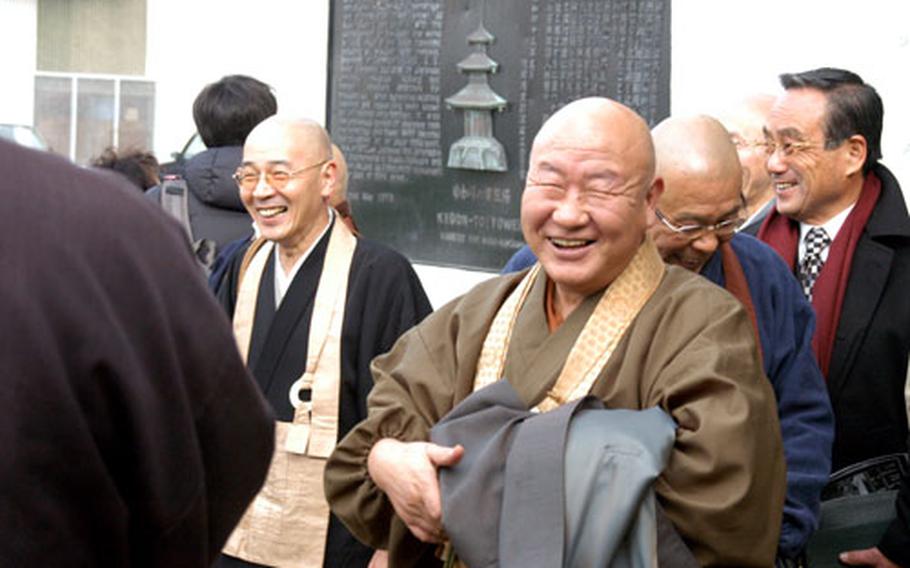 A visit to Yokosuka Naval Base Wednesday was a "grand opportunity" for about 20 Buddhist priests and scholars from the Engakuji Temple in Kamakura. The monument of Hakusen-An formerly stood a "Sea Sign" tower in 1319-1323, similar to one in the Kamakura temple. The same man, Muso Soseki Kokushi , prayed in both areas, but Buddhists don&#39;t often have the opportunity to visit Hakusen-An as it resides on U.S. military property. (Allison Batdorff / S&S) 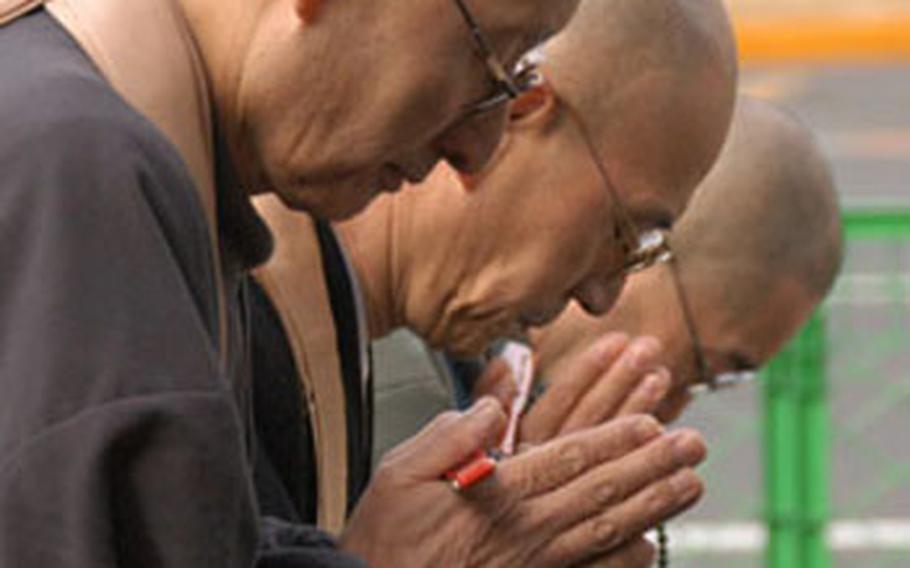 The monks thought it a "grand opportunity" to visit Hakusen-An as it is usually locked away on U.S. military property. Their last visit was 37 years ago, they said. (Allison Batdorff / S&S) The monument, Yokosuka&#39;s Hakusen-An Memorial, was originally a mountain that was leveled off when the land became the Yokosuka Iron Works in 1865. It was also the hermitage of Muso Soseki Kokushi, a famous Zen Buddhist priest and garden designer. (Allison Batdorff / S&S)

YOKOSUKA NAVAL BASE, Japan &#8212; It was the typical weekday hustle Wednesday at Yokosuka Naval Base. Across from the Fleet Theater, cars zoomed by en route to work and home. Ongoing construction herded pedestrians into brightly marked lanes. Big, bold letters advertised what&#8217;s playing in surround sound at the theater.

But 700 years ago, this busy bend in the road was a peaceful mountaintop tower &#8212; a spot of meditation for one of Japan&#8217;s holy men and a landmark for passing ships. And when the Buddhist priests began chanting at the Hakusen-An memorial Wednesday, the past became prominent as the street noise faded away.

The chance to visit this historic place was &#8220;a grand opportunity,&#8221; said the 20 Buddhist priests and scholars from Kamakura&#8217;s Engakuji Temple, as Hakusen-An sits behind guarded gates on the U.S. Navy installation.

Their last visit was 37 years ago, they said, and now a new generation of priests has come to pay their respects.

The site admittedly isn&#8217;t much to look at now &#8212; Mount Hakusen was moved when the land became Yokosuka Iron Works in 1865, explains the plaque that sits on a whitewashed cement hillside &#8212; but it holds significant fascination for Zen Buddhist practitioners and cultural scholars alike.

Here was the temporary hermitage of Muso Soseki Kokushi &#8212; Zen Buddhist prodigy and Japan&#8217;s foremost early garden designer. Historians believe Soseki came to Kanto from Kyoto and established the hermitage in 1319, living there until 1323. He built a three-story &#8220;Sea-Sign&#8221; pagoda tower that was used as a navigational aid.

History credits Soseki with helping to build Zen influence on Buddhism with temples built in each of the 66 provinces. He also designed several of the famous gardens in Kyoto, advised shoguns and emperors, plus was a poet and teacher.

But the exact location of where he built his tower and meditated was the source of controversy in 1968 when the base announced a reclamation and housing plan for Briggs Bay &#8212; where historians say Soseki&#8217;s hermitage was originally sited.

According to documents passed out by the base representatives, the location was altered after an 18-month study that maintained Soseki would have wanted the hermitage to face Mount Fuji, like other temples he established and on historical maps showing the monument across from the theater.

Here, he meditated for about two years, history says.

And though Americans and Japanese pass this place daily as they go about their busy lives and work on the base, the priests Wednesday asked them to remember the significance of the man who walked there before.