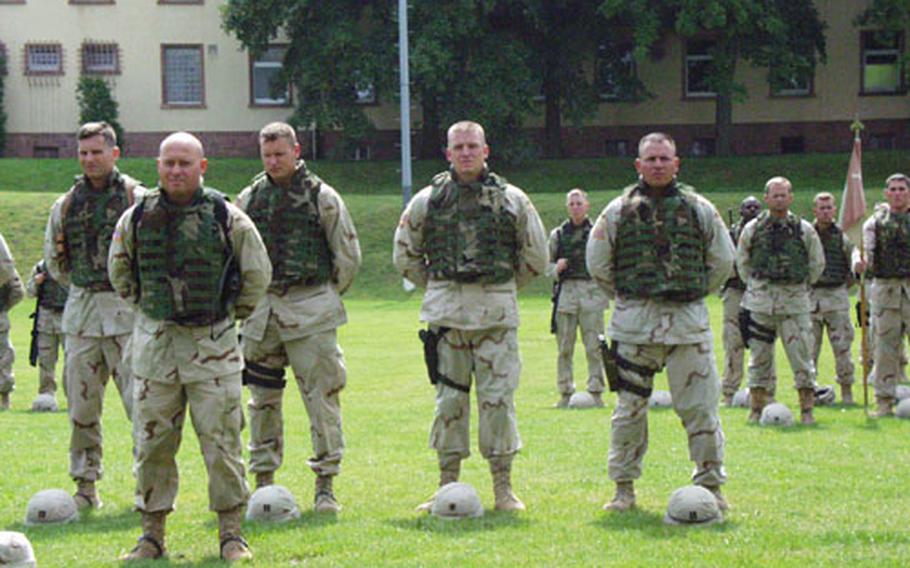 With temperatures rising and troops just days removed from the Middle East, most soldiers taking part in the change of command ceremony Thursday in Büdingen, Germany, were permitted to stand in a relaxed formation without their helmets on for part of the time. Lt. Col. Charles Williams relinquished command of the 1st Squadron, 1st Cavalry Regiment to Lt. Col. John Peeler. (Kevin Dougherty / S&S)

With temperatures rising and troops just days removed from the Middle East, most soldiers taking part in the change of command ceremony Thursday in Büdingen, Germany, were permitted to stand in a relaxed formation without their helmets on for part of the time. Lt. Col. Charles Williams relinquished command of the 1st Squadron, 1st Cavalry Regiment to Lt. Col. John Peeler. (Kevin Dougherty / S&S) 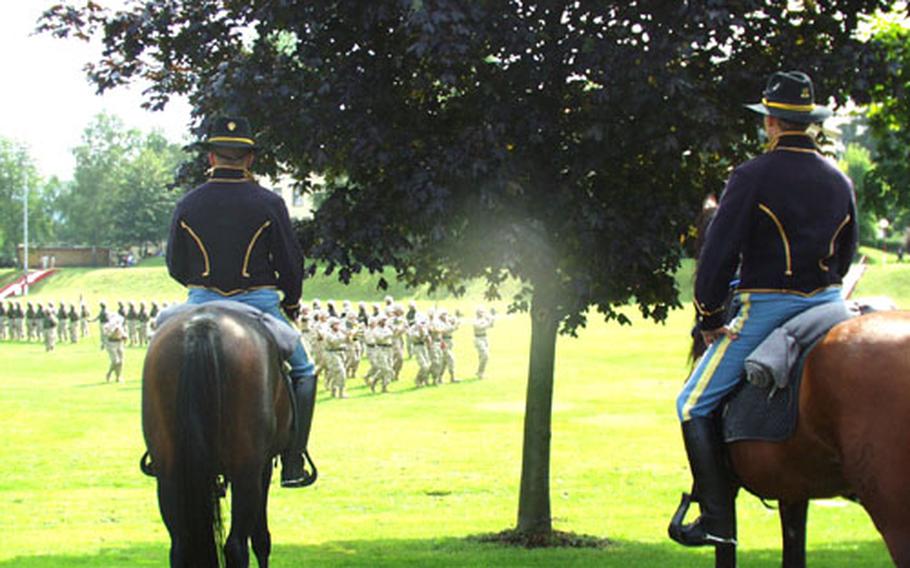 As the band plays on, a pair of horseback riders taking part in the change-of-command ceremony for the 1st Squadron, 1st Cavalry Regiment, find a bit of shade next to a tree. Sitting atop a horse named Sawlan was Stephan Schaffert, left, while Sgt. 1st Class Lee Cofield, of Troop B, 1-1 Cav, watched the ceremony aboard Shazim. Schaffert owns the two horses. (Kevin Dougherty / S&S) 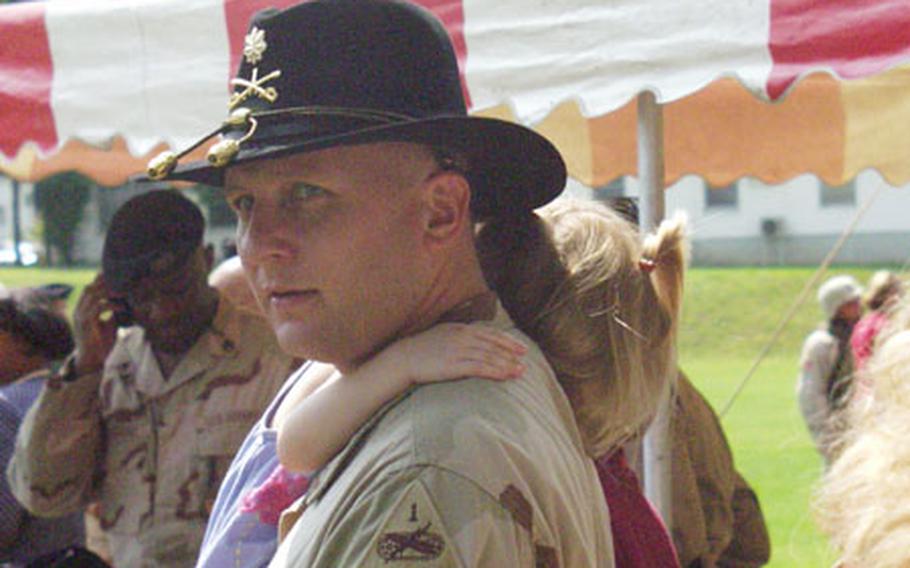 Four-year-old Annie Schwaiger rests for a moment on her father&#39;s shoulder after Thursday&#39;s change of command ceremony in Büdingen, Germany. Annie&#39;s pop is Maj. Steve Schwaiger, who, along with several hundred other troops, have been reuniting with families and friends over the past week. (Kevin Dougherty / S&S)

B&#252;DINGEN, Germany &#8212; With many still in desert fatigues, the troops of the 1st Squadron, 1st Cavalry Regiment bid their commander adieu Thursday.

Delayed by a month because of the need to keep the 1st Armored Division a bit longer in Iraq, the change of command ceremony looked traditional. There were speeches, dignitaries, a marching band, soldiers standing in formation and the ceremonial passing of the unit guidon.

Five days after returning home from the Middle East, Lt. Col. Charles Williams relinquished command of the squadron to Lt. Col. John Peeler. Peeler called the chance to lead the cavalry squadron &#8220;a once-in-a-lifetime opportunity,&#8221; and said he would do his best to preserve its honor.

The ceremony was also festive, though in a respectful way. After all, it&#8217;s still the Army.

But the troops and Williams were in a great mood. Most of the cavalry troops who served in Iraq arrived back at Armstrong Barracks in just the last few days. Williams, for example, returned Saturday.

&#8220;The soldiers look at [B&#252;dingen] as a second home,&#8221; Williams said in an interview an hour before troops fell into formation on the parade grounds.

The ties that bond the base with its host community run deep, deeper than most. The community goes out of its way to help the troops and their families, while the troops are deeply involved in community activities, in good times and bad.

Eighteen months ago, Williams and scores of other troops volunteered in the middle of the night to help local crews fill sandbags to save the old city center and its historic walls and gate.

As the parade field was being prepped for the 11 a.m. ceremony, many soldiers were headed to reintegration briefings. Others could be seen rummaging through large, metal transport containers, trying to sort through gear and equipment sent back from the desert. Most troops were wearing desert &#8212; not woodland &#8212; fatigues.

Not everyone in the squadron made it home alive.

Fifteen soldiers were injured during the deployment.

As he stood at the podium on the parade field, Williams paid tribute to Cooke, Deutsch, Roberts and all the other 1st Armored Division soldiers who received a very different homecoming.

The deployment, though rewarding in many respects, &#8220;cost us a few of our close friends, like Command Sergeant Major Cooke,&#8221; Williams said.

The names of the three squadron members have been added to new crosses planted at the foot of the flagpole on base. In all, 10 crosses represent the ultimate sacrifices the squadron has made since 1991, from Operation Desert Storm to the Implementation Force in Bosnia-Herzegovina, to Iraq.

Maj. Gen. Martin Dempsey, the 1st AD commander, attended Thursday&#8217;s ceremony. Looking at the 89 streamers adorning the unit guidon, Dempsey told the troops that one or two would soon be added to the collection. And, he added, &#8220;You&#8217;ll know what they mean.&#8221;