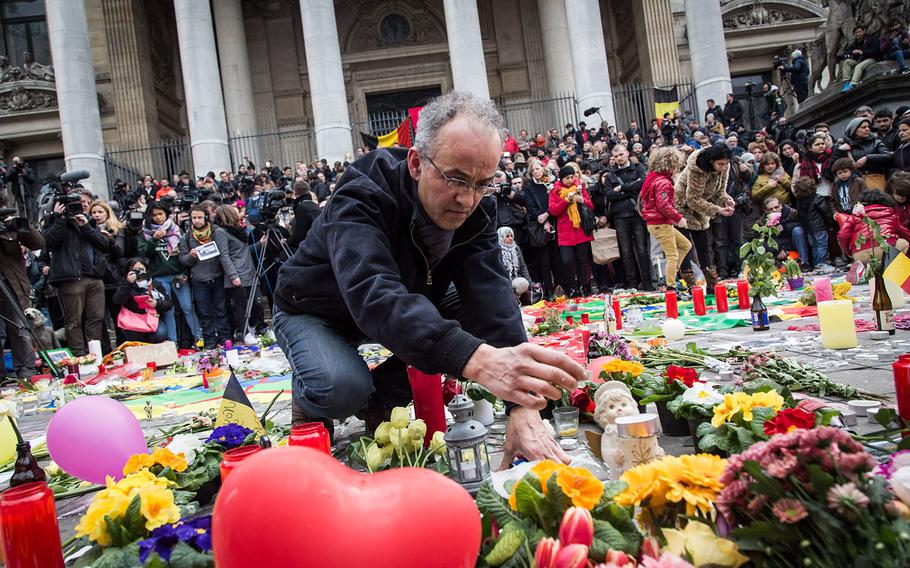 People gather to pay tribute to the victims of the Brussels attacks on March 23, 2016 in Brussels, Belgium. (Aurore Belot, Belga, Zuma Press/TNS)

Servicemembers and civilians stationed in Europe say they might take extra precautions after the attacks in Brussels but they won’t cancel travel plans because that would be a victory for the terrorists.

“It hasn’t slowed us down,” Robert Sutton, 32, a staff sergeant with the Joint Multinational Readiness Center in Hohenfels, Germany, said Wednesday as he waited for a table at the Chili’s Too in the Kaiserslautern Military Community Center with his wife and three sons. They were on a stopover after a trip to London, one of many trips around Europe they have taken, and they will continue to travel, he said.

“That’s how terrorists put fear in everyone’s heart,” he said. “They want everything to stop.”

Pfc. Douglas Watts, who said he’s traveled around Europe while stationed in Vicenza, Italy, said the terrorist attacks in Brussels Tuesday and the November attacks in Paris made him angry. “I loved Paris,” he said. “It just pisses me off to see all that garbage. It makes me so angry because we can’t do anything.”

An Australian with dual citizenship who joined the U.S. Army after a few years knocking about the United States, Watts said his brothers have asked him when the American military is going to rout Islamic State militants in Europe.

“They say, ‘Hey, mate, when are you going to do something, mate?”’ he said. “But we don’t have a role to play. It makes me so frustrated.”

He’ll continue to travel, he said. “I haven’t done London yet.”

Likewise, Chief Warrant Officer 3 Jovan DeLoach, also based in Vicenza, said she and her family would travel to Croatia this summer as planned.

“Terrorism is like crime,” she said. “If you live your life frightened, you’ll never go anywhere or do anything.”

Some are having to rethink travel plans because of the indefinite travel ban to Brussels issued by U.S. European Command.

Heather Napier and her husband, Dana, both staff sergeants with the 24th Intelligence Squadron at Ramstein Air Base, said they plan to travel in May to Portugal and, if restrictions are lifted, “Brussels maybe.”

Right now, they’re playing it by ear and will “wait and see,” Heather Napier said, adding that “in Paris, it only was a month” before restrictions were lifted.

Her husband was hopeful they’d be able to travel through Brussels, “but if not, adapt and overcome,” he said, adding that if they changed their plans, “the terrorists win.”

Some are taking extra precautions after the attacks at Brussels airport and a subway station that killed more than 30 people and wounded scores of others.

Brandy Stevens, a military spouse whose husband is based in Wiesbaden, Germany, will be returning to the States to see family, but she decided not to take public transportation to and from Frankfurt airport.

“We were going to take the train, originally, and go that way, but based upon everything that is happening in Brussels we just thought it would be safer to have friends or co-workers take us to the airport,” she said.

U.S. European Command is urging troops to research travel destinations and enroll in the State Department’s safe traveler program, which connects tourists with embassies in the countries they visit.

Tisha Belme, the spouse of an Army civilian in Wiesbaden, said she is enrolled in the safe traveler program, and her husband receives alerts from U.S. Army Europe. They’ll be traveling to Spain and Portugal over spring break, but they’re more concerned about petty crime such as pickpockets and purse snatchers.

“That’s actually easier to see, to predict and to protect yourself from, and it’s much more prevalent across Europe,” Belme said.

She said she wouldn’t plan a trip to Brussels in the next few weeks, “but a month from now? Absolutely, I’d go to Brussels.”

Army Spc. Tyquane Williams, 25, based in Kaiserslautern, said he still plans to get out and see as much of Europe as he can, though he’s not really interested in going anywhere in Belgium or France at the moment, “or at least until things blow over.”

Some are concerned and wonder where terrorists will strike next.

At Ramstein, Tech. Sgt. Billy Garcia, 39, said he’s proceeding with plans to travel to the Czech Republic with his wife and two sons. He said he feels that by traveling east they’re moving away from the danger in Belgium and France, but if he were traveling in the opposite direction, “I’d probably be concerned.”

The family said they feel relatively safe in Europe, but Garcia said the risk of being caught up in a terrorist attack “is something that’s in the back of my mind.” He added: “What’s next? Berlin? It seems it’s getting closer to Germany.”

Army Capt. Jean-Charles Markley, 37, said the string of recent terrorist attacks would not alter his travel plans. With about six months left on his military assignment in Kaiserslautern, Markley plans to visit London in a few weeks and hopes to get to Paris before he leaves.

“If you’re going to be afraid to travel and do things because of what’s going on, then you might as well just stay home,” he said. A terrorist attack “could happen anywhere, here in Europe or even in America, at any time.”

Some servicemembers say family members back home are more worried than they are.

At the Navy base in Naples, Italy, Rebecca Crumbley, 37, said she had to reassure her family after news of the recent attacks. While she might avoid Brussels and Paris in the near future, she said, she still looks forward to traveling in Europe with her husband, a civilian employee on the base.

“Everybody’s concerned,” she said. “But, you know, they know me. This is what I’m doing, and I’m enjoying it.”

Back at the Chili’s restaurant, Sutton said the family feels pretty safe near Hohenfels in the German countryside

His wife Cheryl, 32, said recent events have made them more vigilant, “but we still get out.”

“It’s a once-in-a-lifetime opportunity,” she added.