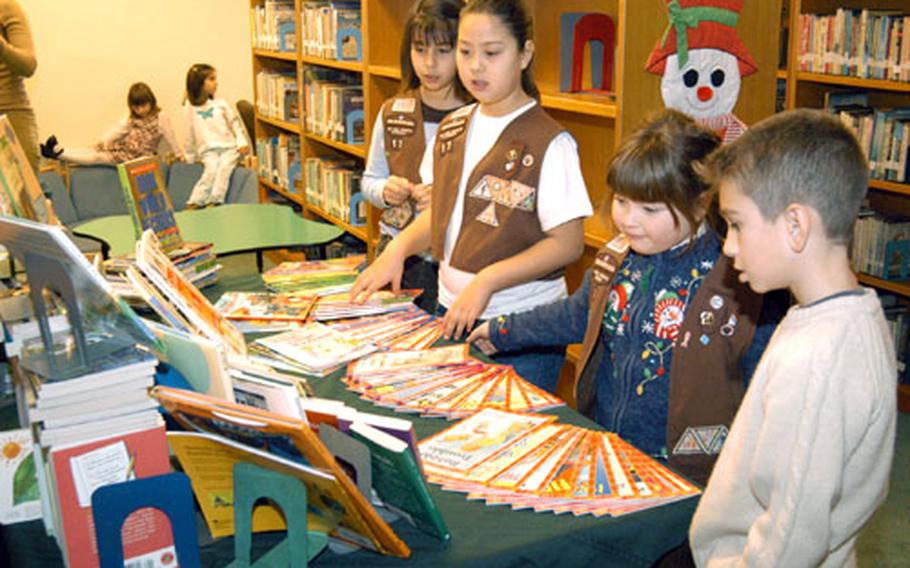 At the Camp Walker Library in Daegu, South Korea, on Saturday, members of Daegu’s Brownie Troop 17 take in some of the more than 250 books they donated to the library through a donation drive they mounted earlier this year. From left are Brownies Ryan Vega, Emily Cox, Caitlin Herztzendorf and Ryan Vega’s brother, Brandon Vega. (Galen Putnam / Courtesy of U.S. Army)

PYEONGTAEK, South Korea &#8212; It was March and time once again for the Brownies of Troop 17 in Daegu, South Korea, to think up a community service project.

One girl brought up the Camp Walker Library and how it could benefit from a fresh infusion of children&#8217;s books.

Others agreed, and in short order they had their new project: a fundraising drive to buy the library new books.

The troop had 17 girls at the time, ages 6 through 9. And with help from troop co-leaders Andrea Hertzendorf and Beth Vega, both military spouses, the troop soon had a plan. They&#8217;d hold a bowl-a-thon.

The Brownies first would go door-to-door in the Daegu military community seeking pledges. Residents could pledge a flat amount or an amount based on each pin a girl would knock down in the bowl-a-thon, said Hertzendorf, who since has become the troop&#8217;s leader.

The girls also sought donations from friends or families in the States. In all, about 125 people donated, about a third of them stateside, Hertzendorf said.

Then Hertzendorf and Vega placed so big an order with an established school book distribution company that the company knocked 20 percent or more off the total price. Troop 17 used the extra cash to order still more books, this time through a popular online book dealer, Hertzendorf said.

With 20 &#8220;gently used&#8221; books donated to the Brownies during their fund drive, Troop 17 formally turned over to the Walker library 270 books last Saturday.

The books are at Yongsan Garrison in Seoul where the Library Service Center will put on book jackets and call numbers and list them in the online catalogue.

&#8220;The focus of so much of the area here is on the military and the soldiers,&#8221; said Hertzendorf. &#8220;A lot of times I guess the children and the young people do get overlooked in some areas. So this was an area they could really help out.