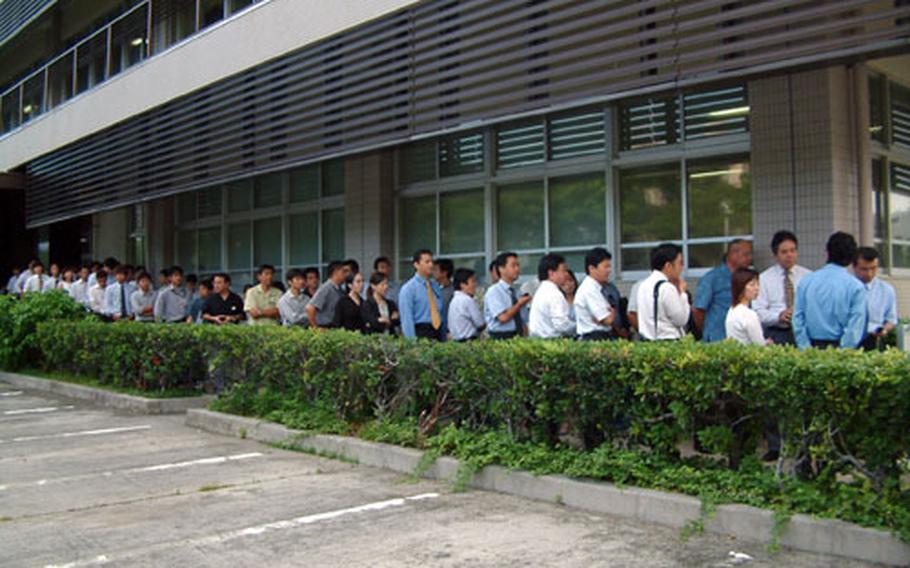 About 140 people line up in front of the Naha District Courthouse Thursday for the 20 public seats available at final hearing in the attempted rape case of Marine Maj. Michael Brown. (David Allen / S&S)

About 140 people line up in front of the Naha District Courthouse Thursday for the 20 public seats available at final hearing in the attempted rape case of Marine Maj. Michael Brown. (David Allen / S&S) NAHA, Okinawa &#8212; Marine Maj. Michael Brown was found guilty Thursday of attempting an indecent act with an officers club barmaid and destroying her cell phone but innocent of the more serious charge that he attempted to rape her.

Brown was sentenced to a year in prison but the sentence was suspended for three years. He also was fined about $1,400. The Marine Corps has not stated whether the 20-year Marine, who spent several months in Japanese custody until bail was granted, might face military sanctions.

The 20-year Marine officer, dressed in a dark blue suit and wearing an American flag tie, stood at attention as he listened to Chief Judge Nobuyuki Yokota read the court&#8217;s findings. He smiled at his wife, who sat in the spectator seats in the cramped courtroom, as he sat down.

In Japan&#8217;s court system, both defense and prosecutors may appeal verdicts. No decision has been made on whether to appeal, although the court&#8217;s decision angered Brown&#8217;s attorneys.

&#8220;It was as though the court stabbed us in the back,&#8221; said Toshimitsu Takaesu, the lead attorney in the case. &#8220;The ruling contains various problems. Our client was charged with an attempted rape but found guilty of attempted indecent assault. That is a problem for us.&#8221;

Outside the courthouse, he called the ruling unfair.

&#8220;If the court was going to examine the case by changing the charge, they should have informed us of the change,&#8221; Takaesu said. &#8220;Our defense strategies would have been different. This was totally unexpected.&#8221;

&#8220;However, we are pleased with the ruling that our client was not guilty of an attempted rape,&#8221; interjected Takashi Takano, a Tokyo attorney who joined the defense in the middle of the trial.

The court ruled there was insufficient evidence to prove Brown attempted to rape Nakamine, 41, after she agreed to give him a ride after the officers club on Camp Courtney closed shortly after midnight on Nov. 2, 2002.

Judge Yokota said there was evidence Brown had arranged a date with the woman and she voluntarily parked her car on a deserted road along the Tengen River, where they talked and kissed.

He said Nakamine told Brown she would not engage in sex on the first date and asked him to stop touching her. He got out of the car, but she agreed to let him back in and drove to a better-lit stretch of the road, where she again parked and talked with the major.

That&#8217;s when Nakamine threatened to call police on her cell phone and Brown threw it into the river, Yokota said. According to trial testimony, Brown then got out of the car and walked away and Nakamine drove to Camp Courtney&#8217;s main gate and reported the incident.

She later said she exaggerated what had occurred to get police to pay attention to her and make Brown compensate her for the damaged cell phone.

Yokota said it was clear that some consensual contact had been agreed upon, but marks on Nakamine&#8217;s neck showed some force had been used. However, the force was used in an attempt to perform an indecent act, not rape.

The trial was marked by a series of surprises, including one in May 2003, when Nakamine, testifying via closed-circuit television, denied Brown had tried to rape her and blamed police and prosecutors for coercing her to file charges. She said she did not understand enough Japanese, especially legal terms, to be able to read the statements she signed.

The judges disagreed, stating that she is married to a Japanese man, has lived here since 1987, and knew enough Japanese to pass a Japanese driver&#8217;s license written test.

Yokota said the three-member panel discounted her allegation as being &#8220;unnatural&#8221; and said she appeared to have been influenced by a $13,500 deposit into her bank account the day before she changed her story. The source of the money has never been determined.

Brown&#8217;s defense attorneys denied it came from anyone connected to the defense.

The prosecution had argued that, whatever the source, there existed the possibility the money made Nakamine change her mind.

Yokota said Brown was given a light sentence because the 21-year-Marine veteran had no prior criminal record.

&#8220;He spent his life honestly and diligently as an officer who started out as an enlisted man,&#8221; Yokota said.

The defense and prosecution have two weeks to decide whether to appeal the court&#8217;s ruling. The Marine Corps has not made a decision whether Brown will face disciplinary action.

Brown, assigned to the headquarters component of the III Marine Expeditionary Force, is married and has two children. He was held in the Naha Detention Center for five months before being released on bail in May 2003. Family members have indicated he will seek to retire.