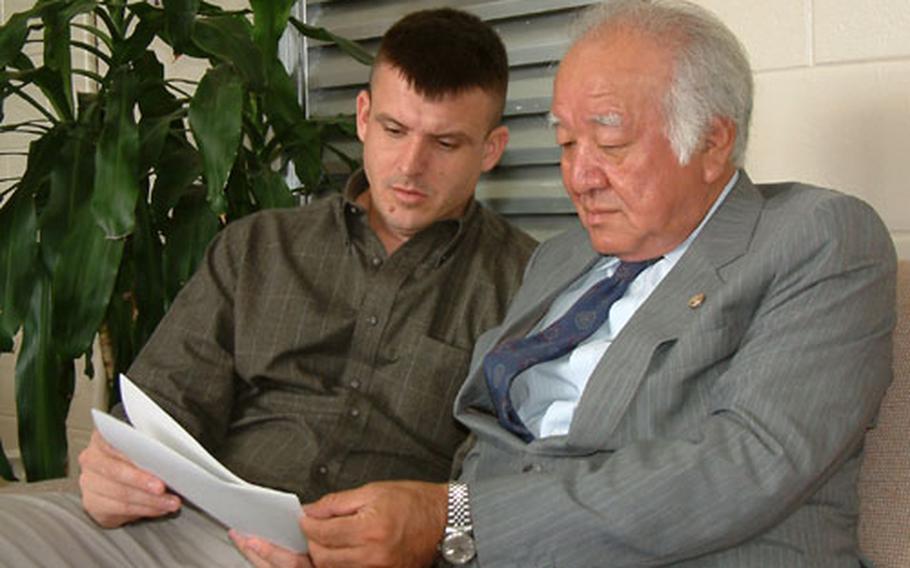 URASOE, Okinawa &#8212; Marine Maj. Michael Brown is hoping the U.S. Embassy in Tokyo can persuade Japanese officials to investigate the way his sexual assault trial is being handled in Naha District Court.

He visited the U.S. Consul General&#8217;s office here Thursday to deliver a letter for Ambassador Howard Baker, accusing the three-judge panel hearing his case of with being in collusion with the prosecution.

&#8220;There is obviously a dialog running between the court and the prosecutor to meet a minimum threshold of evidence to reach a finding of guilty,&#8221; Brown wrote. &#8220;This is not an open court.&#8221;

Brown, 40, is charged with attempting to rape a Filipina barmaid who gave him a ride in the early morning of Nov. 2 from the Camp Courtney officers club to his off-base home. Okinawa police have said Victoria Nakamine told them Brown molested her when she parked her car along a dark road to talk, then threw her cell phone into the nearby Tengan River when she threatened to call police.

But Nakamine, also 40, recanted the charges when she testified at a hearing in May, accusing police and prosecutors of coercing her to sign statements in Japanese she did not fully understand. She said prosecutors ignored several of her requests to drop the charges against Brown and that she never intended for the case to go to trial.

When the three-judge panel ruled in September to accept the woman&#8217;s pre-trial statements along with her court testimony, Brown asked them to disqualify themselves. The judges referred Brown&#8217;s request to another three-judge panel, which denied it. Brown appealed that ruling to the Fukuoka High Court&#8217;s Naha branch.

He said he&#8217;s also going to speak with the Miranda Association, Japanese lawyers pushing for changes in the Japanese judicial system.

And, he said, he hoped the U.S.-Japanese status of forces agreement would be discussed with President Bush during his Tokyo visit this week. &#8220;Talks between the two governments on changing the SOFA have been stalled by the Japanese side,&#8221; Takaesu said. U.S. officials want to change the agreement to let servicemembers and others covered by it have U.S. officials present when interrogated by Japanese police.

Brown, assigned to the command element of the 3rd Marine Expeditionary Force at Camp Courtney, was indicted Jan. 19 and spent 149 days in confinement before being released on bail.

The 19-year Marine veteran indicated the case has weighed heavily on him, his wife and two children.

&#8220;This is going to extend past the anniversary date of the incident,&#8221; he said Thursday, adding that he tried to believe his case was being handled fairly. But after Japanese prosecutors quietly dropped a charge of rape against an Okinawa man accused of assaulting the wife of another Marine, Brown said, he now believes Americans face different standards.

Takaesu agreed. &#8220;There is no difference in the two cases,&#8221; he said. &#8220;Police said the woman accepted compensation from the accused and asked the charge be dropped. And they did so.

&#8220;But in our case, the victim stated she did not want to prosecute and did not want to punish Major Brown. So why was it pursued?&#8221; he asked. &#8220;A charge of rape is indictable only upon a complaint from the victim. If the victim&#8217;s complaint is withdrawn, what is the court doing in proceeding with the trial?&#8221;

Takaesu also accused the judges of accepting &#8220;under the table&#8221; information from the prosecutor.

&#8220;Evidence that she had passed a written test for a Japanese driver&#8217;s license was never mentioned in open court, but somehow the court got the information,&#8221; Takaesu said. The evidence showed Nakamine understood some written Japanese.

In his letter to Baker, Brown asked that an official protest be made to the Japanese government through the Ministry of Foreign Affairs. He also wants the ministry to initiate investigations into the conduct of the judges, prosecutors and Okinawa police.

&#8220;The prosecutors have lied, presented manufactured evidence and refused to disclose evidence they claim to have,&#8221; Brown wrote. &#8220;The last is a clear violation of the SOFA, which allows for cross-examination of witnesses and the discovery of evidence.&#8221;

&#8220;I am not receiving, nor will I receive a fair trial,&#8221; Brown wrote Baker. &#8220;As a citizen of the United States and an active duty member of the United States Marine Corps, stationed in Okinawa, subject to the Status of Forces Agreement, I am seeking your immediate assistance.

&#8220;I request that you use all means at your disposal to extricate me from this situation.&#8221;