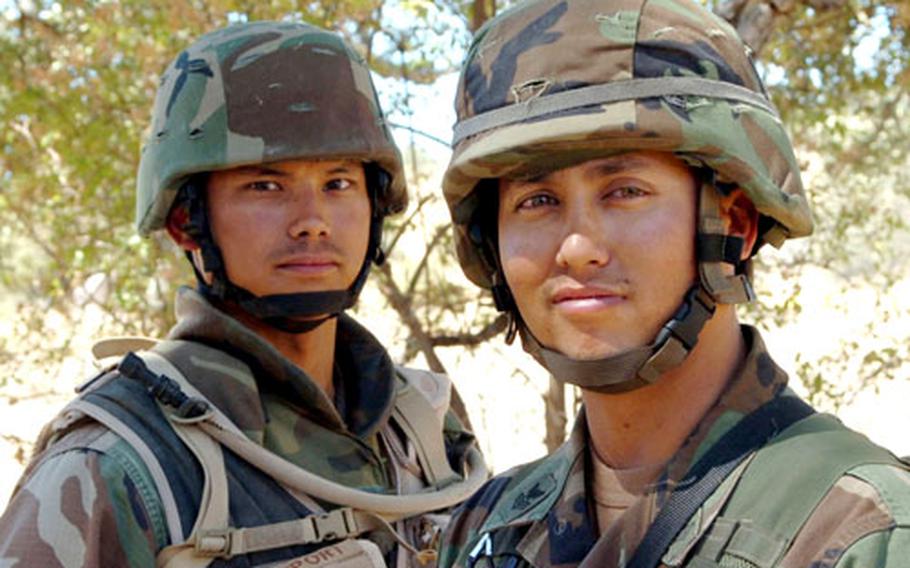 Petty Officer 1st Class Jeff Davenport, left, and his older brother, Petty Officer 1st Class James Davenport joined the Navy together, went through boot camp and rating school together, and are currently stationed together with Naval Mobile Construction Battalion 3, which is at Camp Shields on a six-month deployment. (Carmicheal Yepez / U.S. Navy)

CAMP SHIELDS, Okinawa &#8212; Members of the military call themselves brothers-in-arms. And servicemembers often develop bonds with their comrades that transcend familial relationships.

For two first-class petty officer Seabees stationed at Camp Shields, the Navy really is a band of brothers.

The Davenports, James, 31, and Jeff, 29, joined the Navy together in 1995, became Seabees together and are currently deployed to Okinawa with Navy Mobile Construction Battalion 3, homeported in Port Hueneme, Calif.

Both said enlisting was an easy decision. Their father and an uncle both retired as Navy chiefs.

Jeff then pulled out a pen to prove his point and looked at his brother to see if he had one.

Both admitted that good-natured ribbing is common between them, which has its benefits. Boot camp was actually fun for them. But it wouldn&#8217;t have been as much fun without his little brother, James said.

Jeff added it was just good having someone to turn to while going through a life-changing experience like that.

From boot camp and rating school, the two then spent their first duty assignment at Gulfport, Miss. There, James was known as the &#8220;bad Davenport&#8221; and Jeff as the good one.

When stationed together, nicknames seem to be common for them. Collectively, they are dubbed &#8220;the Davenport brothers.&#8221;

Because James was slightly heavier than Jeff when he checked into NMCB-3, he was Tater Tot, he said.

The Navy is not a competition. James and Jeff said they are just there for each other.

But James remembers that his little brother was promoted to petty officer third class and second class before him.

They were both up for promotion to petty officer first class at the same time, he said.

The brothers said they hope to continue serving together and want to stay in for at least 20 years.