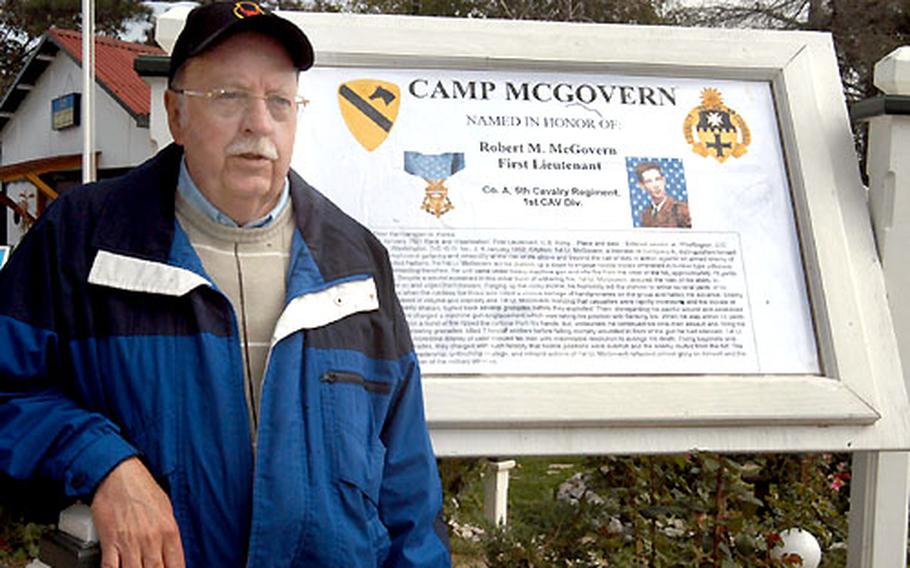 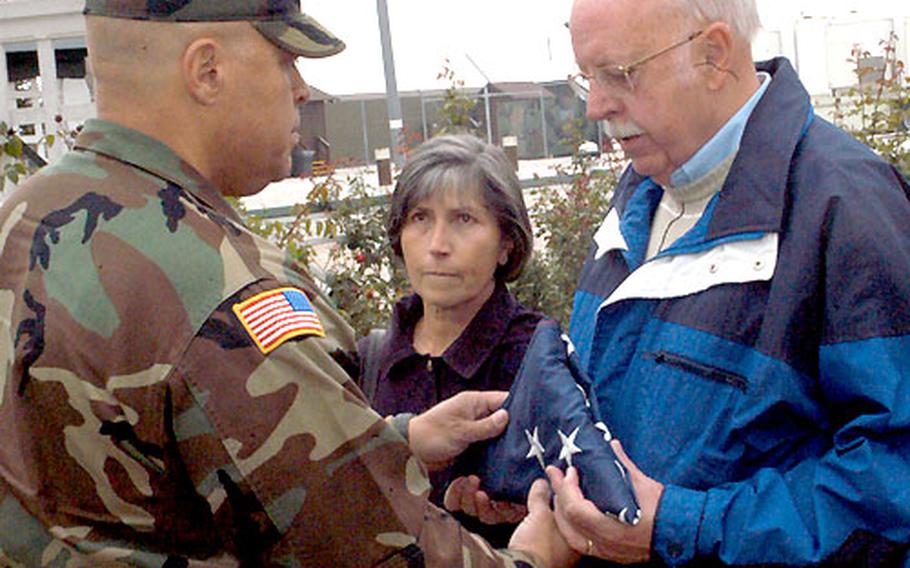 Lt. Col. Kevin Gutknecht, left, of Task Force Iron, commander of Camp McGovern, presents the U.S. flag to Charles McGovern, the brother of 1st Lt. Robert McGovern, the soldier for whom the camp was named, in a small ceremony on Sunday. In the middle is Charles’ wife, Wally McGovern. (Ivana Avramovic / S&S) 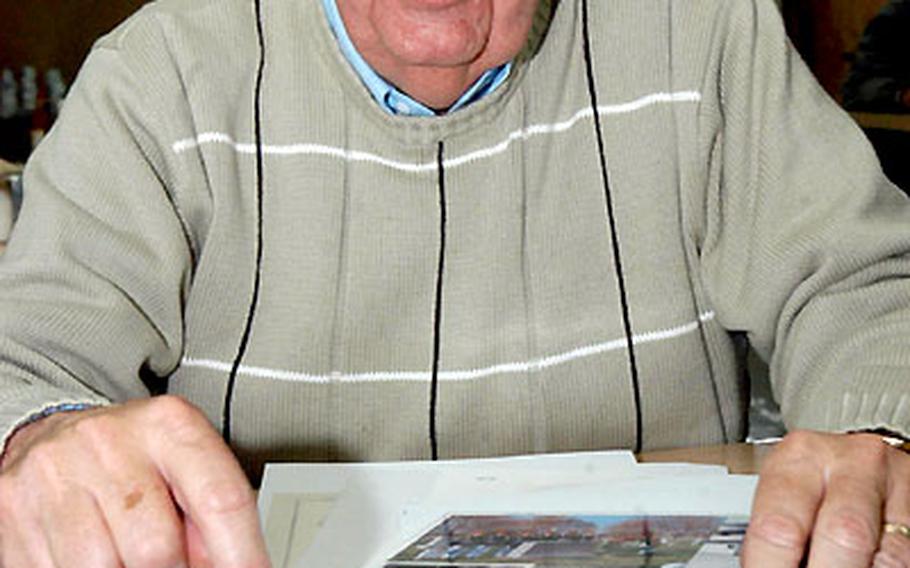 Charles McGovern shows pictures of himself and his brothers that he brought to Camp McGovern, Bosnia and Herzegovina. Robert McGovern was a Medal of Honor recipient who fought and died in Korea in 1951. (Ivana Avramovic / S&S)

CAMP McGOVERN, Bosnia and Herzegovina &#8212; Sunday was an emotional day for Charles McGovern.

McGovern&#8217;s brother, Robert, was a Medal of Honor recipient for his actions during the Korean War. On Sunday, Charles McGovern visited the base in Bosnia that bears his brother&#8217;s name.

It was only by chance that Charles and his family found out that the base was named after Robert. Charles&#8217; oldest brother, John, stumbled upon a map of base camps in Bosnia in 1998. When he saw Camp McGovern, he wondered if the name was related to his brother, Charles said.

John McGovern was unable to get confirmation from the Pentagon, but U.S. Rep. Benjamin L. Cardin, D-Md., finally told them that the base was indeed named after their brother.

On Sunday, Charles McGovern walked with camp soldiers to the sign bearing the name and picture of his brother. A plaque tells the story of 1st Lt. Robert McGovern&#8217;s heroic deeds as a platoon leader during the Korean War. Robert McGovern fought and died near a small village, Kamyangjan-ni, in Korea.

The 1st Cavalry Division named the camp, established soon after the U.S. troops crossed the Sava River in 1995, after one of their own. Robert McGovern served with the division&#8217;s Company A, 5th Cavalry Regiment.

Charles McGovern looked at the sign briefly before shrugging his shoulders and taking a step back. With a look of sadness, and mild shaking of his hands, he said simply, &#8220;that was a bit emotional.&#8221;

The soldiers of Task Force Iron, currently deployed to the camp, greeted their visitor with a small ceremony. They lowered the flag flown that day and presented it to Charles McGovern.

Robert wasn&#8217;t the only McGovern the family lost in the Korean War. Second Lt. Francis Jerome McGovern earned a Silver Star for his actions near Kumwang-ni, Korea, serving with Company I, 9th Infantry Division in 1951. He died less than two weeks after his brother, who died, in February 1951.

That legacy is important, said Charles McGovern, who brought with him an envelope full of newspaper clips, photographs, letters and even a copy of his brother&#8217;s high school transcript. Several articles talk about Robert McGovern&#8217;s involvement in helping a Japanese orphanage during and after his service there. Others talk about the ultimate sacrifice the two brothers made for their country. Letters from top-ranking military commanders are in the collection, as well as one from then-Secretary of Defense Donald Rumsfeld dated Oct. 28, 1976.

During the two-hour visit with his German-born wife, Wally, Charles McGovern got a tour of the camp and a chance to shop for some souvenirs bearing the family name. Charles took home a T-shirt, an etched wooden board and the U.S. flag with a certificate showing it had been flown that day.