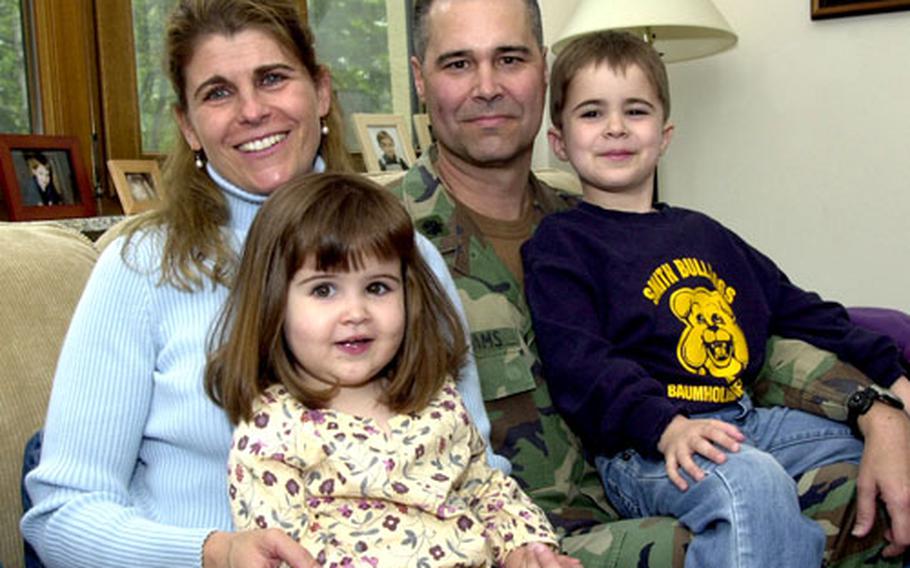 From his Bradley fighting vehicle, Williams had the perfect view as he directed the battle of Kut during which 1st Armored Division Task Force soldiers fought to retake Kut, south of Baghdad, from Mahdi Army militia.

If his Task Force 2-6 troops could secure bridges over the Tigris River, then retake the town, it would be a stunning counterpunch to an out-of-nowhere insurrection by the Mahdi Army militia loyal to radical Shiite cleric Muqtada al-Sadr.

By dawn, his men took all their objectives &#8212; three bridges across the Tigris where it meets the Shatt al-Gharraf waterway &#8212; with no American deaths and four wounded.

But that was just one 12-hour episode out of a chaotic, nonstop, six-day stretch during which Williams shuttled back and forth over some of Iraq&#8217;s most dangerous roads between Baghdad, Najaf and Kut.

In short, Williams earned his Bronze Star Medal for everything ultimately going right &#8212; not anything that went wrong &#8212; during frantic maneuvering as the 1st AD Task Force fought to extinguish an insurrection threatening to envelop Iraq.

William&#8217;s story also is the story of some of the hardest fighting and the fastest planning and execution for one of the most successful American campaigns in Iraq since the fall of Baghdad.

The insurrection spread in hours to the strategic regional centers south of Baghdad sacred to the Shiite sect of Islam including Najaf and Kut.

For Williams, it all started April 4 when he got a call from Col. Ralph O. Baker, 2nd Brigade Combat Team commander, saying Mahdi Army fighters had attacked the provisional government offices in Najaf. Williams had four hours to move about 125 miles southwest to Najaf from Camp Muleskinner on the southern edge of Baghdad.

The direct routes from Baghdad to the Shiite shrines Najaf and Karbala run through a treacherous area. So Williams created a mobile tactical operations center in his 5-ton truck, and he, his ops officer, his intel officer and a scout escort, went off to Najaf in a four-vehicle convoy &#8220;right through the worst area.&#8221;

They arrived at Camp Hotel, and met with Honduran soldiers there, then went on to Camp Baker-Golf where they coordinated with Salvadoran troops who&#8217;d fought Mahdi Army fighters hand-to-hand.

Harassed by mortars and small-arms fire, Williams&#8217; soldiers spent the next two days patrolling and planning. But on the evening of the third day &#8212; before he could take back Najaf &#8212; Williams got a call from Baker saying Williams needed to get back to Baghdad posthaste: &#8220;He said, &#8220;Your police stations have been taken over and looted.&#8221;

So, Williams and a four-vehicle scout platoon got back on the roads heading north to Baghdad, where insurgents were increasing attacks against Muleskinner-based troops. Williams rearranged his defenses, then negotiated with local Iraqis, trying to get the area stabilized: &#8220;All I wanted&#8221; he said, &#8220;was for things to quiet down so I could go back and deal with the other problem.&#8221;

That night, he got yet another order from Baker: Move your task force from Najaf to Kut.

As many as 400 Mahdi Army fighters had overrun the provisional government compound, the police station, the radio station and many of the bridges, forcing Ukrainian troops to fight their way back Camp Delta, about a mile outside Kut.

After an afternoon of planning, the U.S. attack was set for 9 o&#8217;clock that night, with Williams and Capt. Mike Wall of Company D, 2st Battalion, 6th Infantry Regiment taking the mechanized Company D Headquarters Company, 2-6, west up the river to cross at Namaniyah, then coming back east to Kut in a 70-kilometer envelopment maneuver from the west.

Meanwhile, two light infantry troops from the 2nd ACR would seize a series of three bridges to the south of Kut.

The 2nd ACR troops have little trouble with the first two bridges, but Mahdi militiamen fought hard on the third. Arriving after his long drive, Williams surprised the militia, retaking the CPA compound.

At the same time, he sent Bradleys and tanks to relieve the 2nd ACR troops pinned down at the bridge. The fighting ended at dawn, but not before Williams pulled back a platoon from the middle of the bridge to give the Spectre gunships room to fire on the Mahdi fighters.

When the two forces linked back up, Kut was back under Williams&#8217; control. His units fought a couple more days, but nothing compared to that night. The fight against Mahdi&#8217;s Army continued in Karbala, Najaf and Kufa for another two months, and involved nearly 5,000 U.S. soldiers.

Williams, a self-deprecating, easygoing Marylander, recounts that opening victory in a low-key narrative. But he is clear that it was the toughest fighting his men saw in their 15 months in Iraq.

&#8220;That was the only time I felt like we faced a really determined enemy,&#8221; Williams said. After the fight, he learned that President Bush had told Lt. Gen. Ricardo Sanchez, the Iraq commander at the time: &#8220;Two provisional capitals are in enemy hands. I want one back tomorrow.&#8221;