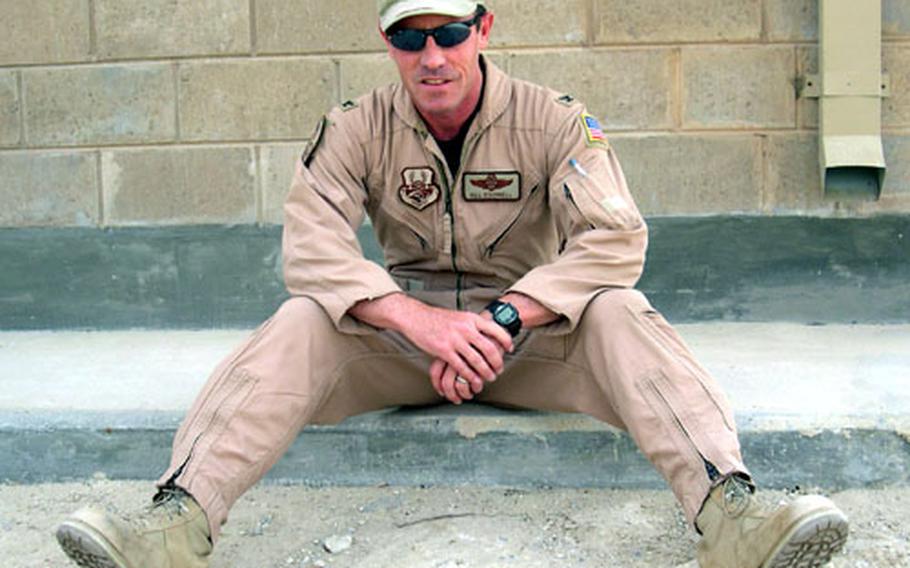 For his leadership in helping to establish a C-130 transport hub in Kuwait in late 2003 and early 2004, Col. William O’Donnell of the 3rd Air Force at RAF Mildenhall, shown during his deployment, was awarded the Bronze Star medal last month. (Courtesy of William Oâ™Donnell)

RAF MILDENHALL &#8212; In war, the men and women directly involved in combat often receive most of the headlines and decorations.

But for every front-line troop, there are numerous people in supporting roles.

For his part in aiding key components in the early stages of the Iraq war, Col. William O&#8217;Donnell of the 3rd Air Force at Mildenhall was awarded the Bronze Star medal last month.

O&#8217;Donnell, an Air Force reservist, commanded the 368th Expeditionary Operations Group in late 2003 and early 2004 from Ali Al Salem Air Base in Kuwait. He also spent 21 days as vice commander of the 368th Air Expeditionary Wing.

After a quick call-up and mobilization, O&#8217;Donnell helped stand up the air base with a fleet of C-130s, transforming it into a 2,500-airman-strong operation.

Setting up troop transport infrastructure to and from Iraq was still relatively new in those days, he said.

&#8220;The base was not prepared for the huge influx of people,&#8221; he said last week. &#8220;Besides worrying about my own guys and flying several hundred sorties a day and getting shot at, we were in charge of trying to figure out where we were going to put all these people.&#8221;

The most prominent passenger was Saddam Hussein in late 2003, right after he was captured, O&#8217;Donnell said.

O&#8217;Donnell is modest about receiving the Bronze Star, and said his starkest memories have to do with transporting troops away from the front line. Troops that would not return.