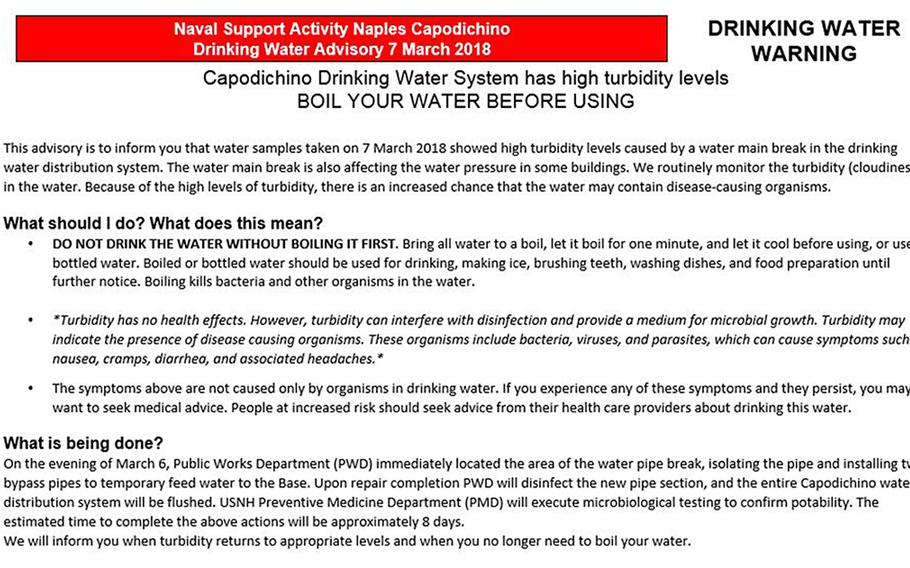 The Navy issued a health advisory and sent most personnel home Wednesday after a broken pipe turned water murky and made the pressure too low to flush some toilets at the Capodichino base. (Screenshot)

NAPLES, Italy — The Navy issued a health advisory and sent most personnel home on Wednesday after a broken pipe turned water murky at the Capodichino base.

“Although we have a plan for repair, we have also experienced an issue with our potable water no longer being potable,” Capt. Todd Abrahamson, the Naples base commander, said in an email to personnel.

The disruption mainly affected administrative and service employees, who will return to work Thursday.

A work crew found the broken water main Tuesday night and installed two smaller pipes as a stopgap. It could take as long as a week to fully restore the system, officials said.

Personnel were sent home to lessen the strain on the impaired system, especially in the restrooms, said Ben Warner, spokesman for Navy Facilities Engineering Command.

Capodichino is the Navy’s command hub in Italy. No one lives at this installation, though visitors stay at the on-site Navy Gateway Inn & Suites.

Those staying at the hotel are advised to either use bottled water to drink, brush their teeth and wash dishes or boil tap water before using it.

Water with high turbidity can contain bacteria, parasites and other pathogens that can cause nausea, headaches, cramps and diarrhea, the advisory said.