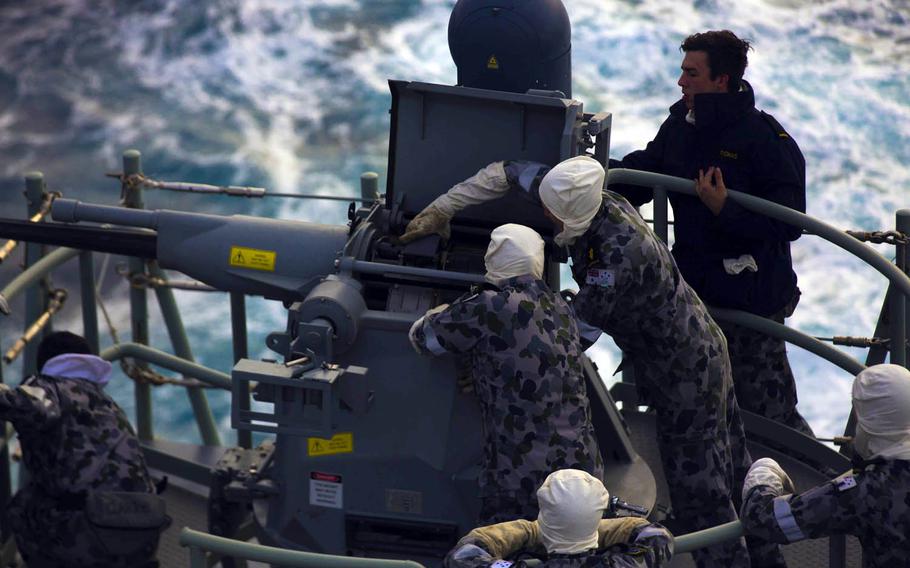 The HMAS Canberra and HMAS Adelaide — $3 billion mini-aircraft carriers capable of handling more than 1,000 troops, 100 vehicles and up to 18 helicopters — have had serious mechanical problems this year. Engineers have reported problems with the ships’ diesel-electric powered propellers, including oil leaks on the Canberra and metal fragments in lubricant on the Adelaide, the Australian Broadcasting Corporation reported last month.

The Adelaide was forced into dry dock, and operations were restricted on the Canberra just weeks from the start of Talisman Saber, a biennial series of exercises involving more than 30,000 Australian and U.S. personnel in late June and July.

“[The Adelaide] will not participate while it undergoes maintenance in dry dock,” Australian Defence officials said in a May 27 email.

The Canberra is still being assessed, officials said.

“The wider spectrum of maritime training outcomes, of which amphibious operations is just a part, are expected to be achieved during [Talisman Saber],” officials said. “Most importantly, the exercising of the Australian Defence Force’s amphibious capability is not solely dependent upon the participation of one, or both, [ships].”

Australian national security consultant Ross Babbage said the HMAS Choules, a former Royal Navy landing ship, will be available for the exercise. Problems with the other ships will have only a marginal impact on Talisman Saber, he said.

“The primary goal is more about cooperation with advanced systems, dispersed movement and dispersed fires and a whole raft of other advanced things rather than just routine amphibious operations,” Babbage said.

Babbage said the training will help U.S. and Australian forces prepare for highly networked operations they will be capable of once both militaries field F-35 stealth fighters over the next few years. For example, an F-35 will be able to use its radar and sensors to guide a missile fired from a ship hundreds of miles away to the target, he said.

“There are a lot of very advanced experimental things that can be done between the U.S. and Australian forces in remote areas,” he said.