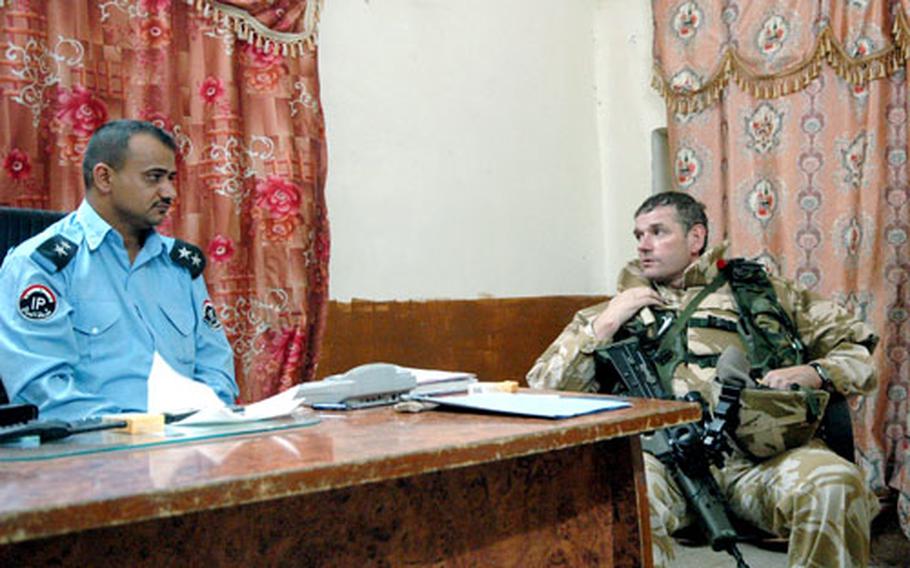 A British Army soldier inspects a truckload of tomatoes at a traffic checkpoint in Basra recently. (Monte Morin / S&S) Trooper Simon Piper, 20, of the Queen’s Royal Hussars, takes a firing position while on a night patrol in Basrah recently. (Monte Morin / S&S)

Yet when the commander of British forces in Iraq visited Basra on the heels of two devastating attacks that claimed the lives of seven of his troops recently, not one soldier raised an eyebrow when Maj. Gen. John Cooper stepped from a tiny &#8220;Snatch&#8221; Land Rover, swapped his helmet for a wool tam-o&#8217;-shanter and trudged off to personally &#8220;smell the atmospherics&#8221; of this sprawling, trash-strewn city.

Unfazed by the shouts and taunts of teenage boys who roam the city&#8217;s streets and sometimes toss stones at soldiers, Cooper chatted up local shop owners before stepping into a local police station and holding audience with the station commander.

The scene was a vivid example of the British army&#8217;s famed &#8220;soft posture&#8221; approach to fighting a counterinsurgency, an approach that was developed during 30 years of conflict in Northern Ireland and is a fundamental part of British military training. The approach is also one of a number of ways British troops in Iraq differ from U.S. forces, who have only recently undergone intensive training in peacekeeping tactics.

After dismounting from cramped Land Rovers or from Warrior fighting vehicles &#8212; slightly more comfortable versions of a Bradley fighting vehicle &#8212; patrol leaders take a reading on the local mood and, if they judge the situation safe enough, order troops to shuck their helmets and don berets or bush hats.

At the Royal Military Academy Sandhurst &#8212; Britain&#8217;s West Point &#8212; officers spend a third of their training on such operations. The training involves an exercise known as Terra Firma, where students react to simulated riots and other civil disturbances. The extremely stressful exercise has been dubbed &#8220;Terror Backtermer&#8221; by students, because those who fail it must repeat the course.

&#8220;Some people lose it when they start throwing stones and petrol bombs,&#8221; said Capt. Steve Pengilly, 26, of the 1st Battalion, The Light Infantry, a Paderborn, Germany, based unit.

In some cases, the British army&#8217;s rules of engagement are more similar to the escalation of force policies used by U.S. police departments. Soldiers are also drilled like civilian police officers in &#8220;judgmental trainers&#8221; &#8212; video simulators that test a soldier&#8217;s response to scenarios such as drive-by shootings and other disturbances that may or may not warrant a lethal response.

The contrast in styles between the British military and the U.S. military has been the source of some small friction between the two forces. That was particularly the case two years ago when some British officers charged that the U.S. Army&#8217;s &#8220;kinetic&#8221; style of soldiering was alienating Iraqis.

Soldiers in the British army say they are often awed by the fighting spirit and capacity for hard work that characterizes American soldiers, but many also view American soldiers as being all too quick to shoot.

To be sure, the 8,000 British troops serving in Iraq are engaged in a very different conflict in the country&#8217;s south. While U.S. forces are battling Sunni insurgents, who have used car bombs to devastating effect, British forces are instead the focus of warring Shiite militias who have, so far, rarely used car bombs in attacks. The militias, though, have pioneered the use of a particularly deadly brand of roadside bomb &#8212; the explosively formed projectile, or EFP. Also, much of the conflict in the south has been confined to Basra, commanders say.

British soldiers who have helped to train American troops over the last two years say the U.S. Army has gradually changed its posture.

For all the British army&#8217;s focus on civilian relations though, they are very different when it comes to handing out gifts like soccer balls, water and candy to local Iraqis, something that U.S. soldiers are very fond of doing. British soldiers do not hand out gifts, partly out of fear that Iraqi children may get injured by traffic as they chase after the gifts and each other.

There are areas though where British forces are taking pointers from U.S. troops.

For years, British troops have worn body armor that was tailored specifically for the threat of snipers on Northern Ireland. The vests sport small ballistic plates roughly the size of a paperback book on the front and back. Now, soldiers are starting to wear body armor with plates as large as in American vests.

And, while British troops were once told not to wear sunglasses, because they were seen as distancing soldiers from civilians, more and more of them are wearing ballistic glasses, like Americans.

&#8220;There has been a body of thought that criticizes the Americans for being over-kinetic and a body of thought that criticizes the British for our hearts and minds approach,&#8221; said Brig. John Everard, commander of the 20 Armoured Brigade. &#8220;What we&#8217;re seeing now is a situation where each is learning from the other. The divide is closing. When the thing is done and dusted I think we&#8217;ll see a new doctrine emerge.&#8221;