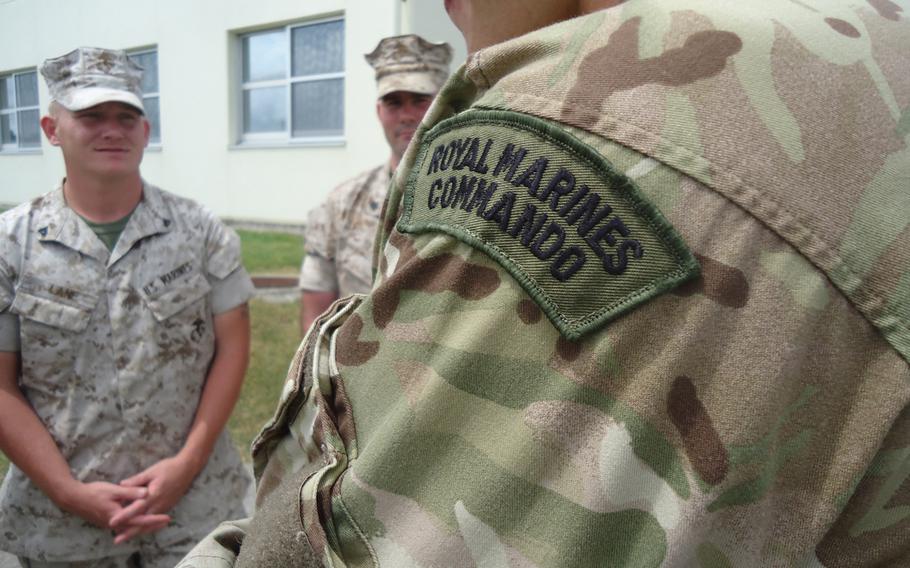 CAMP FOSTER, Okinawa — A mysterious commando has been spotted across Asia, accompanying U.S. Marines from Weapons Company, 3rd Battalion, 2nd Marine Regiment since they arrived in Okinawa on the Unit Deployment Program in February.

The pattern on his cammies is not digital; it’s closer to the forest green of the Vietnam era. He wears a beret instead of a Marine Corps brimmed “cover” and prefers tea and crumpets and Manchester United to American fare and the NFL. (He is mystified by the Marine Corps staples of dip and country music.)

The 25-year-old British Royal Marine – who asked that his name be withheld and face obscured because it would preclude him from his intended career in British Special Forces -- is the first participant in a new exchange program between the countries. The program places young British officers with U.S. Marine platoons for about 18 months. It is designed to familiarize Marines on both sides of the Atlantic with their allies and increase interoperability for future maneuvers.

The Royal Marine was replaced in Okinawa by another on Aug. 11, and he returned to Camp Lejeune, N.C., where he will serve with his American mates for another year. Two more British lieutenants will join him in January as the program expands.

The U.S. Marines returning with him called the bilateral program a smashing success.

“It’s been excellent so far,” U.S. Marine Corps Sgt. Christopher Sevigny said of having the Royal Marine embedded with their platoon. “They have different experiences; they’re more focused on their actual soldiering and not so much getting all wrapped up in technology. It’s nice having him here, bringing that new breath.”

Sevigny said the embedded Royal Marine would definitely be in the top 1 percent of U.S. Marines, so he gave them something to aspire to.

“Just having a relationship with him here definitely makes me trust the Royal Marines,” said Cpl. Darby Johns. “Knowing that they have leaders like him. I know he’s a boss at basically anything he does. He’s going to take all this back and tell them, ‘This is what they do; this is how they operate.’ There’s just a lot of trust between us and them.”

How they stack up

While there are billets for higher ranking Royal Marine officers with American troops and vice versa, this is the first time a Royal Marine lieutenant has embedded at the small unit level. The program is only one way, with hopes to send U.S. Marines to the United Kingdom in the near future.

The Royal Marine cannot officially lead American troops, but he has acted as the Combined Anti-Armor Team platoon commander since their lieutenant left the unit earlier this summer.

The Royal Marines are very similar to their U.S. counterparts, falling under their country’s navy. They are also the ship to shore fighting force, specializing in raiding, yet they are older at 350 years and smaller in numbers, at about 6,000.

“We’re very much the older brothers, but a lot smaller brother,” the Royal Marine said in August at Camp Schwab where he was stationed. “It’s pretty much the same sort of thing the U.S. Marine Corps does but just on a lot smaller scale, a lot smaller teams usually.”

Their training regime is similar to that of the U.S. Marines. They endure 32 weeks for enlisted Royal Marines and 64 for officers. It is not easy to earn the coveted green beret, he said.

Their training includes drills; rope climbing; marching at your own pace, something they call “yomping”; and long sojourns into the mountains. Their commando test features a 70-minute, 6.5-mile hike through rough terrain, which includes flooded trenches, while carrying 21 pounds and a rifle. The next day, they must endure a nine-mile speed march at a 10-minute-mile pace. The third day, they have an assault course with a lot of high obstacles.

They cap their training with a 30-mile endurance march – simulating what the British Royal Marines did in the Falklands -- carrying 40 pounds and a rifle that must be completed in seven hours for officers and eight for enlisted.

“It’s very physical,” he said. “The Royal Marines are built around endurance as opposed to lifting and shorter endurance events.”

After passing basic, the Royal Marine deployed to Norway with NATO for three months in 2010. Then he moved to Royal Marine reconnaissance.

He spent six months in Afghanistan with the unit 45 Commando, dodging IEDs and taking the fight to the enemy in vulnerable areas. It was here that he got his first chance to work with U.S. Marines from Air Naval Gunfire Liaison Companies. He became acquainted with them on long patrols.

“I liked their gear,” he said. “I much prefer the M-4 [rifle]. ANGLICO was very good, very efficient. I found it interesting that a lot of them were Cobra pilots and they were doing a tour on the ground so they could see basically our point of view. Very helpful guys, excitable, when the rounds are coming in; they love that. I thought very highly of them really.”

The following year, he deployed on the British equivalent of a Marine Expeditionary Unit, which is called a Response Force Task Group. In 2013, he went to officer training.

“That was a big insight to how those guys go through,” he said. He then went to Okinawa with the 3-2 in February, after only a couple of weeks with the men at Lejeune.

The thought behind the embed program was, “Let’s try and get guys here nice and early to try and iron out basically some of the problems we might have in the future of working together,” he said. However, it was not without its ups and downs.

First, the men had to get used to his thick British accent. Then he had to learn new weapons’ systems used by the anti-armor unit. Finally, there were issues getting the permissions that would allow him to work with foreign forces.

“I’m obviously an infantry officer, proficient in my job, however, being thrown in with guys who basically speak a different language than me, different acronyms, different terminology for everything, it was very difficult,” he said. “No one can understand you to start with but everyone was very approachable ... more approachable than some of the guys back home. I gotta give it to the U.S. Marine guys.”

The U.S. Marines said that the Royal Marine ingratiated himself with his strength and an indefatigable work ethic, and by asking questions of the enlisted men. He was very “down to earth” and helped some of them put together their resumes. He even taught the U.S. Marines how to play cricket.

“He’s a great leader,” said Cpl. Cameron Lane. “He filled a big void whenever our lieutenant left and had to go back to the states while we were in Korea. He stepped up and acted as the platoon commander and he did a great job.”

The Royal Marine said his experience was a success.

“It’s good for us because rather than just get the knowledge and know-how of the Royal Marines and how it works, we’re getting that understanding of how the other forces work, and we can bring that experience and knowledge back,” he said. “There’ll be a lot of things I’ll be taking back.”