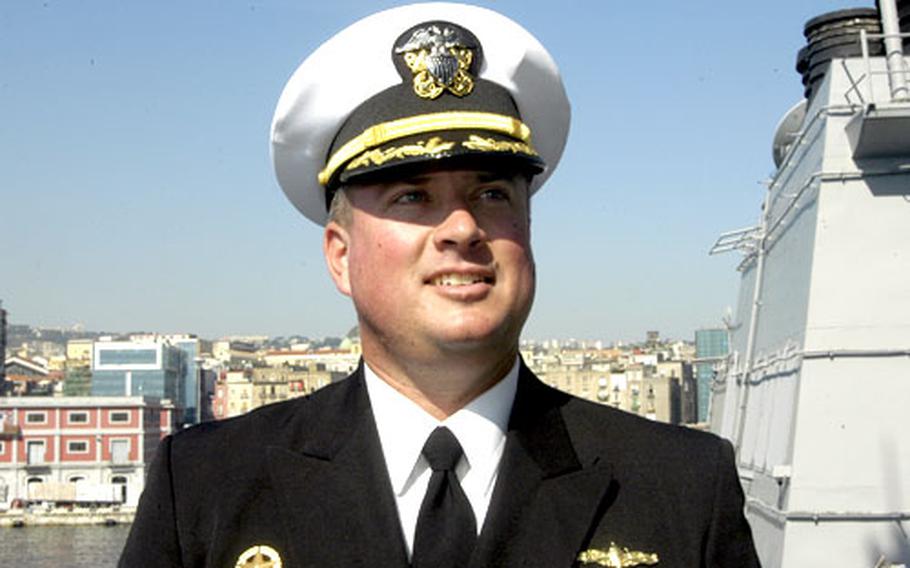 NAPLES, Italy &#8212; In a rare move, the British Navy has asked for a U.S. destroyer to sail as part of the British strike group, U.S. Navy officials said Wednesday.

The crew of the guided-missile destroyer USS Barry made such a positive impression earlier this year during the ship&#8217;s participation with the British Navy in the Neptune Warrior exercise that one of the U.S. military&#8217;s closest allies asked exclusively for the crew&#8217;s return, said U.S. Navy Capt. John Nowell Jr., commander of Destroyer Squadron 60.

&#8220;I don&#8217;t think that has ever happened before,&#8221; Nowell said in an interview following a change-of-command ceremony aboard the warship as it sat pierside in downtown Naples&#8217; busy port.

A press officer from the British Navy was unable to comment by deadline.

In the short term, the Barry, homeported in Norfolk, Va., is winding up a unique six-month deployment of sailing more than 45,000 miles. The crew of roughly 300 sailors crossed the Atlantic Ocean four times, with port visits to 11 countries on four continents, and a dipped across the equator during its mission to Africa&#8217;s Gulf of Guinea, bestowing for many a time-honored naval tradition of becoming a shellback, Wolstenholme said.

Of note, Wolstenholme said, the Barry diverted from an exercise in the Black Sea for &#8220;a real-world operation&#8221; when war erupted between Israel and Hezbollah this summer.

The destroyer spent 74 days off Lebanon&#8217;s coast, the longest of any U.S. or coalition ship for that mission, and provided air defense and 34 escorts for civilian ferries and naval vessels evacuating fleeing Americans and others from Lebanon.

Hours of training paid off for the crew, who &#8220;rose to the challenge and got things done,&#8221; Wolstenholme said.

Cmdr. William Seaman Jr., takes over from Wolstenholme, and said he&#8217;ll strive to maintain the crew&#8217;s top-notch performance, which, in part, earned the Barry one of the U.S. Navy&#8217;s top awards for most improved ship.

Maintaining high morale in spite of the ship&#8217;s high operational tempo will be one of his greatest challenges, Seaman said, and he&#8217;ll rely heavily on his chief petty officers to keep the crew motivated.

Wolstenholme&#8217;s next assignment will be executive assistant to the deputy commander of Fleet Forces Command in Norfolk, Va.