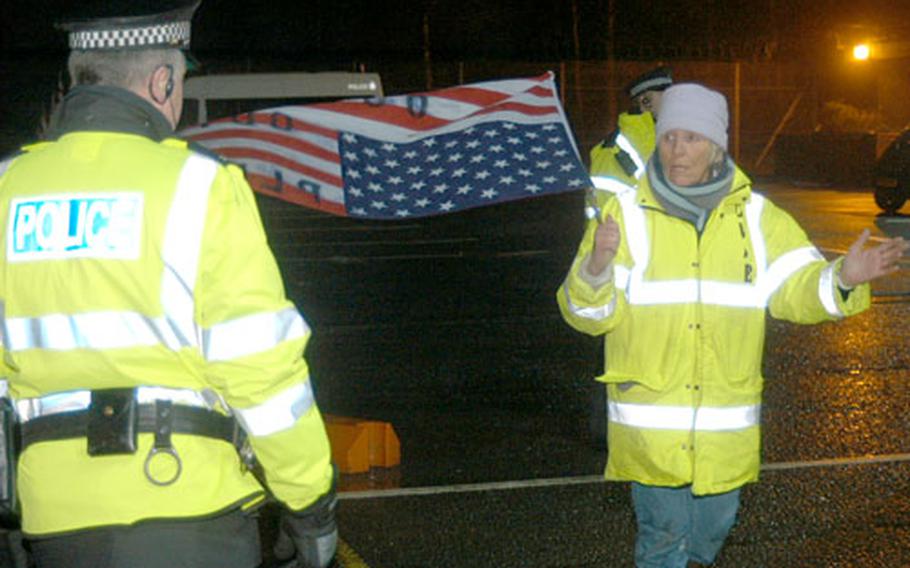 Lindis Percy, right, co-founder of the Campaign for the Accountability of American Bases, quarrels with Ministry of Defence police during a recent demonstration at RAF Menwith Hill, England. A new British law increases the penalty for trespassing on military sites in England and Scotland. (Ben Murray / S&S)

RAF MILDENHALL, England &#8212; A new British law increasing the penalty for trespassing on military sites in England and Scotland already has been tested by demonstrators hoping to challenge the legislation.

Two English women, ages 61 and 68, were arrested April 1 at the gates of RAF Menwith Hill, the U.S. intelligence and communications base in northern England, after walking across the base boundary just hours after the law came into effect, Ministry of Defence police spokesman Patrick Nealon said.

Prior to April 1, the women would not have faced criminal charges for trespassing at a U.S. base, and risked fines of only up to 500 pounds (about $900), Nealon said. Now, each woman could face up to 51 weeks in prison and fines of up to 5,000 pounds.

The legislation is part of a broader law, called the Serious and Organized Crime and Police Act 2005, which expanded police powers in the United Kingdom. Language in the law increases penalties for offenses for &#8220;trespass on designated site,&#8221; with a list of applicable sites to be determined by the British home secretary of state.

The remaining U.S. bases in England, such as RAFs Alconbury, Molesworth and Upwood, plus the small naval installations in the London area, are not on the list because they aren&#8217;t critical sites subject to demonstrations or protesters trying to gain access, Nealon said.

The new law also does not change the U.S. security forces&#8217; procedure for apprehending trespassers on American bases, Nealon said. Currently, U.S. security personnel can only detain British citizens until the Ministry of Defence or local police arrive to formally arrest them.

Nealon said the aim of the increased charges is to serve as a more stringent deterrent to demonstrators and trespassers in order to keep them from distracting ministry police from their primary duties, he said.

But opponents call the law draconian and say it limits the rights of protesters.

Davida Higgin, an organizer for the anti-nuke Lakenheath Action Group who has been arrested for trespassing on the local base in the past, said the new penalties would make her think seriously about attempting it in the future.

She did not agree with the ministry&#8217;s position that the penalties would make it easier for police to differentiate between protesters and true terrorists, which Nealon said was an aim of the new law.