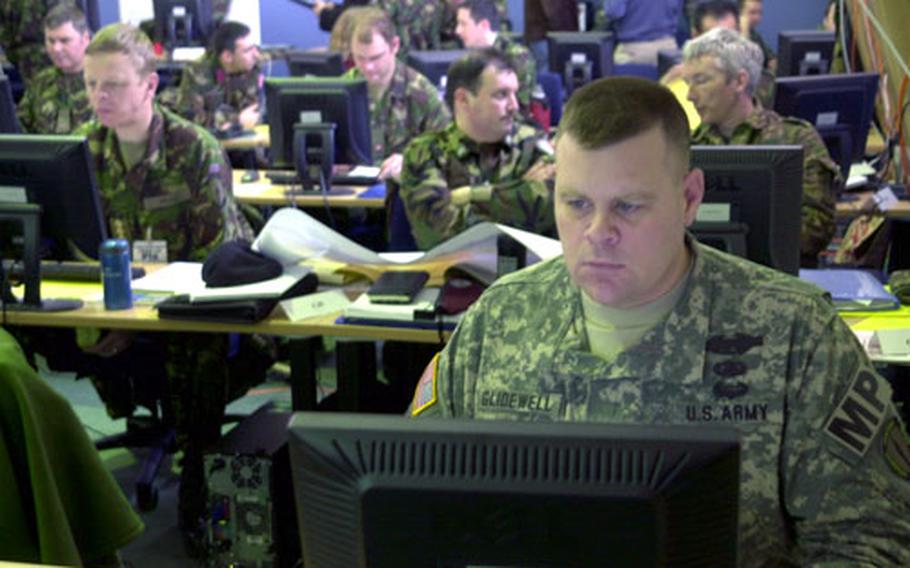 U.S. Army Capt. Ken Glidewell, 36, of San Antonio, Texas, is a military policeman with the Allied Rapid Reaction Corps. This week in Norway, the corps headquarters is training for its deployment to Afghanistan. (Joseph Giordono / S&S)

U.S. Army Capt. Ken Glidewell, 36, of San Antonio, Texas, is a military policeman with the Allied Rapid Reaction Corps. This week in Norway, the corps headquarters is training for its deployment to Afghanistan. (Joseph Giordono / S&S) 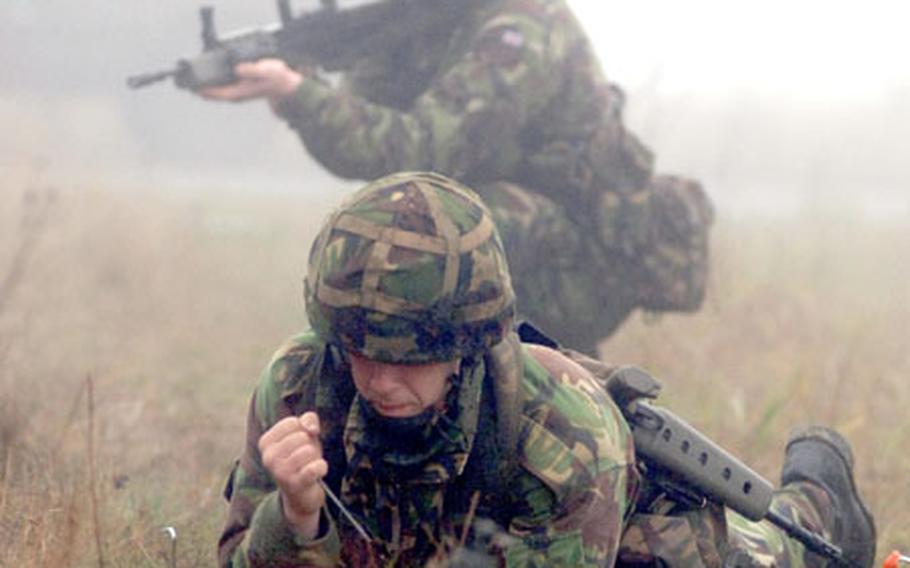 Members of the Allied Rapid Reaction Corp&#39;s Support Battalion practice extracting a casualty in a mine-clearance exercise. Much of the field training for the unit&#39;s upcoming Afghanistan deployment was conducted in November, in an exercise called ARRCADE SPEAR 05. (Frank G. Proctor / Courtesy of ARRC)

STAVANGER, Norway &#8212; A NATO headquarters unit is in the midst of training for a deployment to Afghanistan that &#8212; as early as this summer &#8212; will see the Allied Rapid Reaction Corps assume command of all foreign troops in the country.

It will be the first time since World War II that U.S. troops at war would be under the theaterwide command of a foreign officer, in this case, a British three-star general. It will also mark a historic expansion of NATO&#8217;s mission outside Europe, possibly providing a blueprint for alliance missions in Africa or elsewhere.

&#8220;I&#8217;ve absolutely no doubt&#8221; NATO is ready to lead the force, the ARRC commander, British army Lt. Gen. David Richards, said in an interview. If attacked, &#8220;we will respond robustly to whoever wishes to take us on. The NATO [rules of engagement] are more than robust enough to deal with anyone who wishes to tangle with us.&#8221;

Richards also said that member nations such as Germany and Italy have, in almost all cases, released their troops from &#8220;caveats&#8221; that restrict how they can participate in the mission.

The ARRC &#8212; a Rheindahlen, Germany-based headquarters of 450 troops from 17 nations, including around 40 Americans &#8212; is completing its final mission rehearsal exercise at a NATO compound in Norway. The rehearsal closely follows the intended plan for NATO: In a &#8220;Stage III&#8221; that begins a few months after the ARRC&#8217;s deployment in May, troops in southern Afghanistan will fall under NATO command as the International Security Assistance Force (ISAF).

In &#8220;Stage IV,&#8221; that command would expand east, effectively bringing all forces in the country under a unified NATO command. The U.S. commander of Combined Joint Task Force-76, Maj. Gen. Benjamin Freakley of the 10th Mountain Division, would then also become a deputy commander for ISAF.

While some observers believe political and military considerations would keep Stage IV from happening before the fall, Richards &#8212; and American Gen. James L. Jones, supreme allied commander Europe &#8212; said it could happen sooner than expected.

Stage III could go into effect as early as June or July, with Stage IV coming as soon as 30 days later.

Though U.S. troops would be under NATO command, the military roles will follow a complicated division. American forces will continue to conduct &#8220;active&#8221; counterterrorism operations, with the NATO/ISAF command focusing on broad security and reinforcing the Afghan government and security forces.

Poster-size copies of the &#8220;commander&#8217;s intent,&#8221; laying out the goals and rules for the deployment, are papered all over the walls of the training center. By Thursday, the exercise had begun in earnest, with simulated reports of friendly-fire incidents, bomb attacks and bird flu outbreaks. The exercise is the culmination of 18 months of preparation for the deployment, including a larger field exercise in November.

&#8220;We want to give them situational awareness and try to add realism from our experience in Afghanistan,&#8221; said U.S. Army Lt. Col. Bob Hom, who was playing the role of CFC-A commander in the exercise. Hom is in his 11th month of an Afghanistan deployment as a liaison officer.

For some of the U.S. personnel who have already served in Afghanistan, the exercise reinforced many of the things they had learned in their first tour.

Simon Brooks, an International Committee of the Red Cross delegate to western European militaries, also took part, but for real-world reasons. When NATO expands its role, how will it handle detainees?

NATO officials say they will follow a &#8220;96-hour&#8221; guideline under which they must transfer prisoners to the Afghan government after a four-day period. But complications arise if those prisoners are then mistreated or abused by Afghan officials. How would NATO nations react?

The week&#8217;s lessons and a warning for the Afghanistan mission might inadvertently have been captured best during a Wednesday briefing that kicked off the exercise.

&#8220;Many of the problems will be of your own making. Predict that trend to continue,&#8221; British Air Marshal Peter Walker, who commands the Joint Warfare Center in Stavanger and oversees the exercise, told the assembled troops.