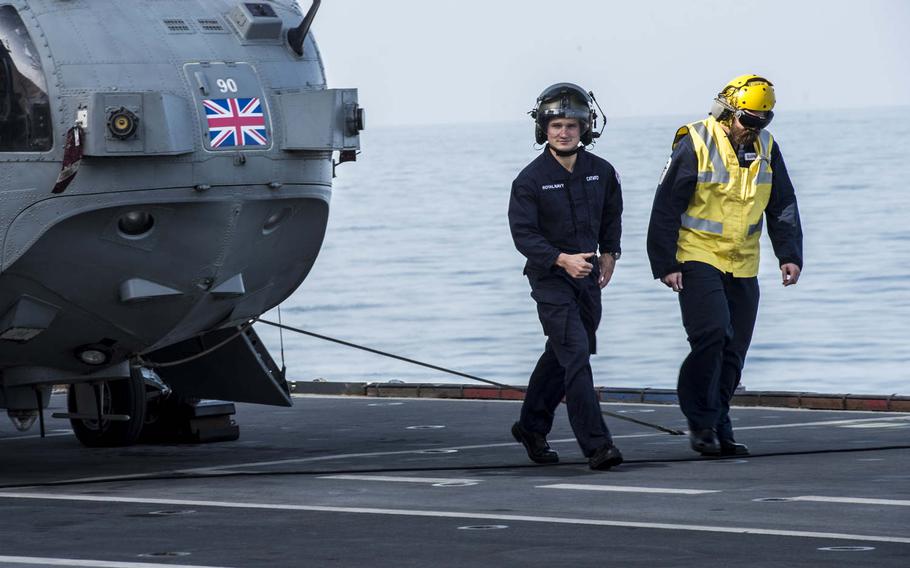 Flight deck crewmembers on board the British navy's HMS Ocean walk around a helicopter and prepare for flight operations in the Persian Gulf after loading a passenger into the helicopter during exercise Unified Trident, Jan. 31, 2017. (Chris Church/Stars and Stripes)

Flight deck crewmembers on board the British navy's HMS Ocean walk around a helicopter and prepare for flight operations in the Persian Gulf after loading a passenger into the helicopter during exercise Unified Trident, Jan. 31, 2017. (Chris Church/Stars and Stripes) 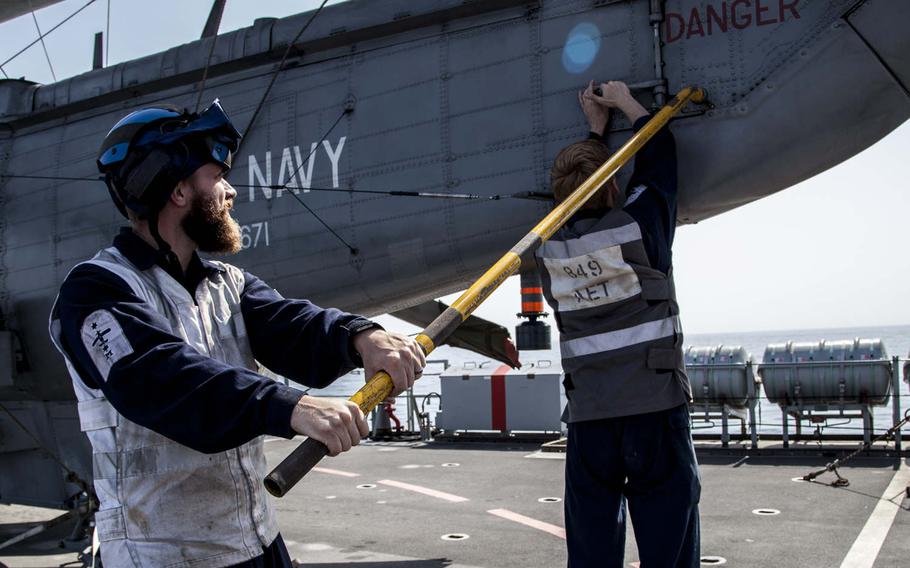 Sailors from the British nayv's HMS Ocean conduct a preflight check on the rotor of a helicopter before flight operations in the Persian Gulf during exercise Unified Trident, Jan. 31, 2017. (Chris Church/Stars and Stripes) 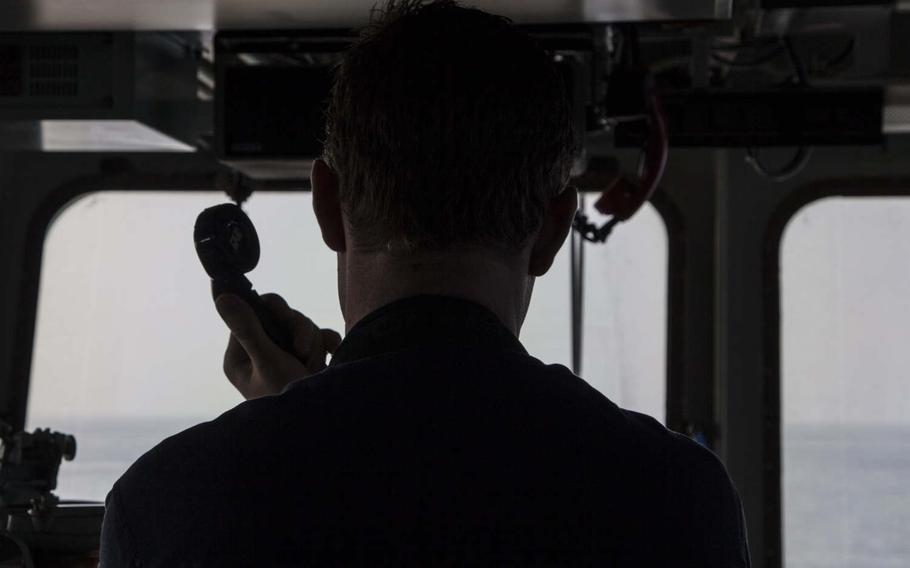 A sailor in the bridge of the British navy's helicopter carrier HMS Ocean calls crew in another area of the ship during operations in the Persian Gulf as part of exercise Unified Trident, Jan. 31, 2017. (Chris Church/Stars and Stripes) 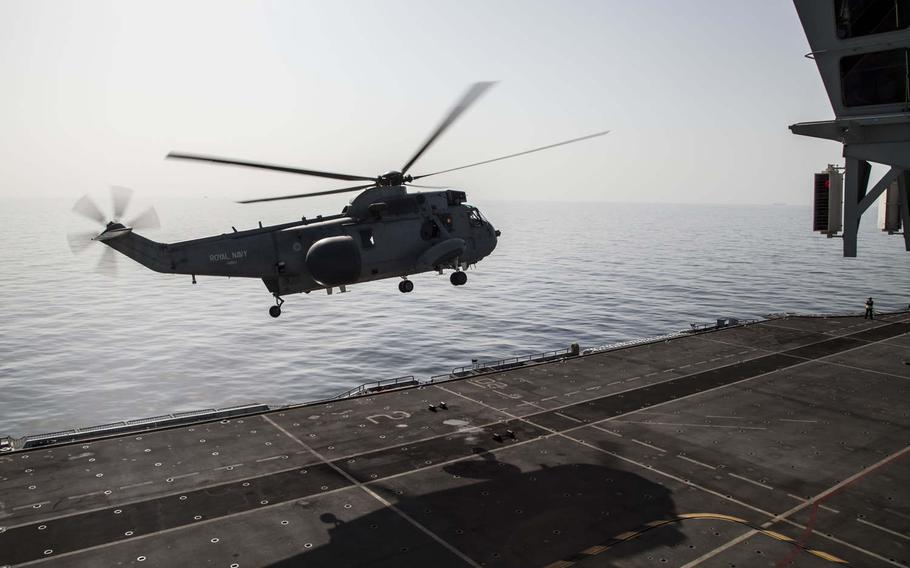 A helicopter takes off from the British navy's helicopter carrier HMS Ocean during exercise Unified Trident in the Persian Gulf, Jan. 31, 2016. (Chris Church/Stars and Stripes) 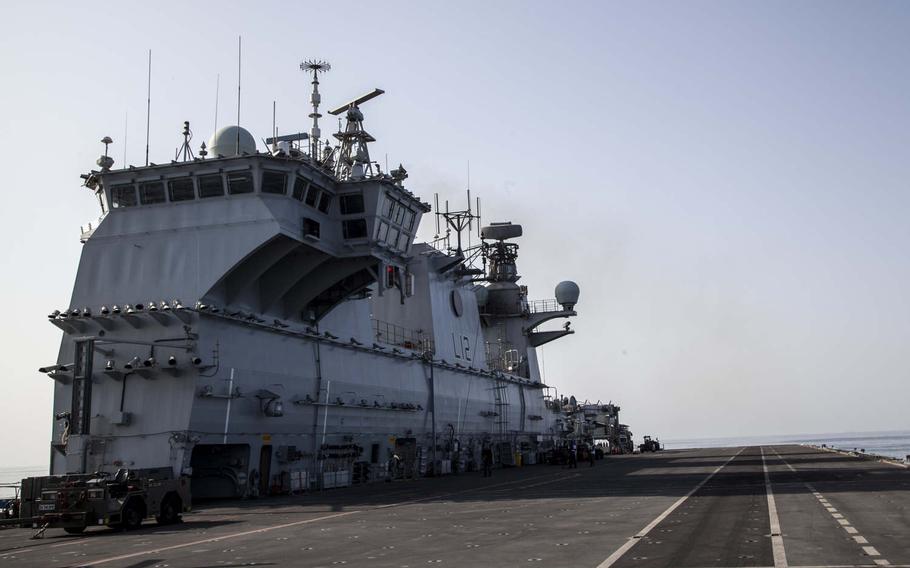 An empty flight deck on board the British navy's HMS Ocean after flight operations during exercise Unified Trident in the Persian Gulf, Jan. 31, 2017. (Chris Church/Stars and Stripes)

ABOARD HMS OCEAN — The flagship of the British navy, HMS Ocean, is still proving itself a capable platform even though it’s slated to be retired in 2018.

Since late November, the nearly 20-year-old helicopter carrier and assault ship has served as the flotilla leader for U.S. Naval Forces Central Command’s Task Force 50. The task force is normally led by a U.S. aircraft carrier and commanded by the strike group’s commander.

Because the Ocean is not capable of airstrike operations, it has not been involved in Operation Inherent Resolve, the U.S.-led coalition to defeat the Islamic State in Iraq and Syria.

But it has played an integral role in maintaining security and ensuring the free flow of commerce throughout the Middle East, HMS Ocean’s commanding officer Capt. Robert G. Pedre said.

“You shouldn’t underestimate the utility of maritime power and having warships operating globally ... and also in terms of our ability to respond to an unforeseen crisis should one occur,” Pedre said. “I generally think the nations surrounding the Gulf draw genuine strength from the knowledge that there are coalition maritime forces operating in this area of operations.”

Most recently, the 22,000-metric-ton vessel served as a command-and-control platform to bring together a multinational task group for exercise Unified Trident, which ran from Jan. 31 to Thursday and involved the British, Australian and French navies, along with the U.S. Navy and Coast Guard. British navy Commodore Andrew Burns, currently the commander of NAVCENT’s Task Force 50, led the exercise from the ship.

In the past, U.S. Navy and Marine forces and those from partner nations Qatar and the United Arab Emirates have operated from Ocean’s flight deck, Pedre said. Ocean began its deployment in September as part of the British navy’s inaugural Joint Expeditionary Force Maritime Task Group. It crossed into the Middle East in October.

“In terms of the opportunity to build partnership, it’s been instrumental having [Ocean] in the area,” he said. “But also in terms of our readiness for contingency. Our ability to evacuate personnel in a crisis situation, I’ve got four landing craft, and the ability to embark up to, depending on the aircraft type, some 18 helicopters really brings huge capability.”

The ship has operated with 12 different planes, including a number of surveillance aircraft. Because of its flexibility and its long range — it can travel about 2,500 miles a week and can cover more than 8,000 miles on a single fueling — the ship can serve as a platform for a wide range of activities, Pedre said, including noncombatant evacuation operations, humanitarian disaster and relief operations, countering illicit trafficking, and wartime operations.

HMS Ocean can embark 40 vehicles and 480 marine commandos if they are needed for amphibious operations.

“I think the key point is we provide a huge reassurance,” Pedre said.

Ocean’s retirement plan has been met with some criticism in the United Kingdom, as it will leave service a couple of years before the first of two new aircraft carriers, HMS Queen Elizabeth, will likely become operational. Another concern is that it received a massive, $80 million refitting just two years ago.

Former First Sea Lord, Adm. Lord West, pushed for Prime Minister Theresa May to keep the ship in the fleet until 2023, when the second of Britain’s new aircraft carriers, HMS Prince of Wales, will become operational.