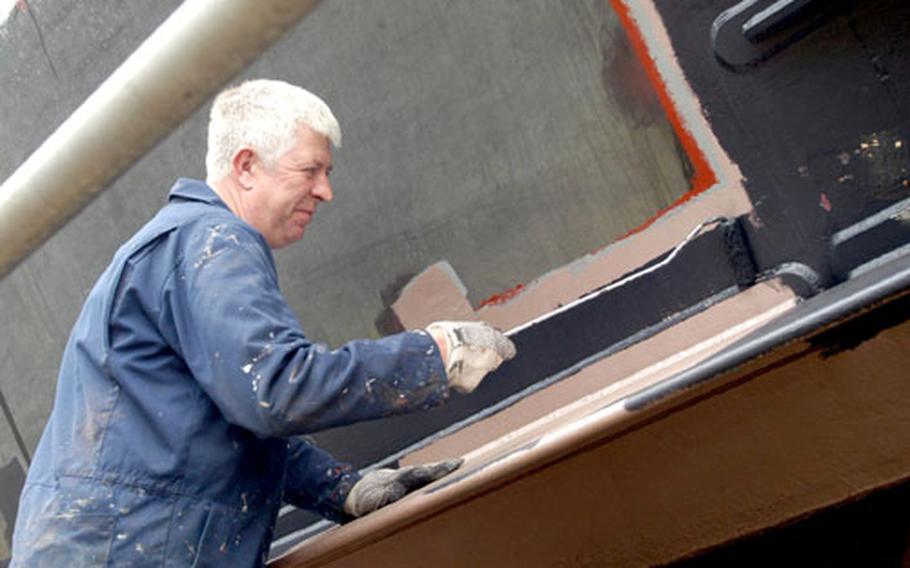 U.S. Army Field Support Battalion-Hythe employee Wayne Murray paints the hull of a 128-foot Army tugboat at the Army’s only U.K. facility. Murray and his colleagues will lose their jobs at the end of September. (Bryan Mitchell / S&S)

U.S. Army Field Support Battalion-Hythe employee Wayne Murray paints the hull of a 128-foot Army tugboat at the Army’s only U.K. facility. Murray and his colleagues will lose their jobs at the end of September. (Bryan Mitchell / S&S) 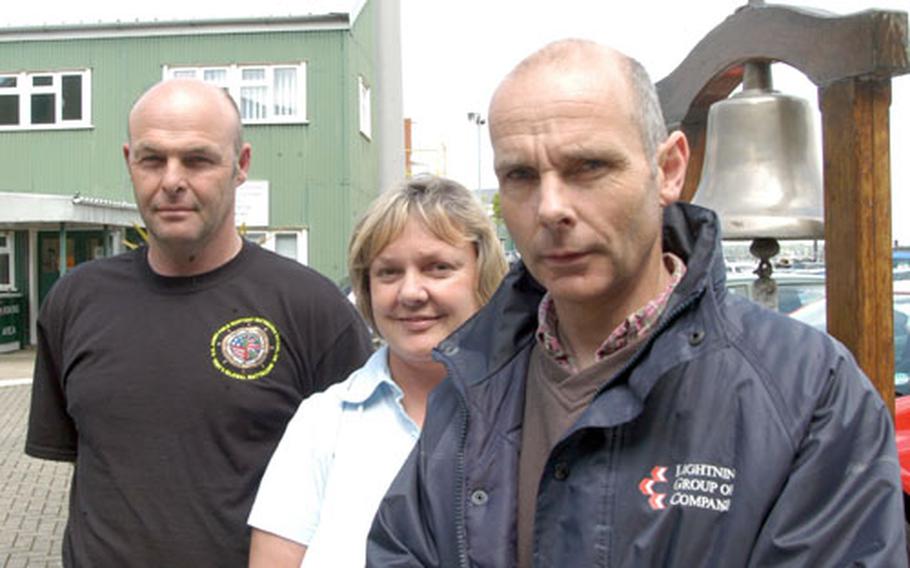 From left, Phil Gittings, Christine Nolan and Anthony Finlay are working to reverse the closing of the U.S. Army Field Support Battalion-Hythe. A total of 210 British employees will lose their jobs. (Bryan Mitchell / S&S)

Gittings is one of 210 British employees at the U.S. Army Field Support Battalion-Hythe whose last day of work will be Sept. 30. That&#8217;s when the base is slated to close its doors.

The steelworker and welding supervisor is not taking the news in stride.

He and a handful of colleagues in a quasi-union organization have asked their member of Parliament to intervene.

New Forest East MP Dr. Julian Lewis and a handful of other members wrote to British Foreign Secretary Margaret Beckett asking her to lobby U.S. Secretary of State Condoleezza Rice on the employees&#8217; behalf. Lewis, who is the shadow defense minister, also wrote a letter to Defense Secretary Donald Rumsfeld. He took exception to passages in a Pentagon press release that said displaced workers will be helped to find new jobs, and that transferring work to Kuwait and Japan will save money.

U.S. State Department officials in London met with Gittings and a few other members of the Local National Employee Council, an elected board representing the Hythe employees.

The council came armed with statistics refuting the Pentagon&#8217;s assertion the closure will save $15.2 million, citing a U.S. Army Audit Agency report that shows the Hythe operation will be the cheaper than running the same operation in Kuwait and Japan, as is currently planned.

The group asserted the closure will sap 4.5 million pounds ($8.3 million) a year out of the local economy.

They left the meeting deflated.

The workforce has been too dedicated, including deployments to Kuwait, Somalia, Afghanistan and Japan in the past 15 years, to not petition zealously for the jobs, the employees say.

Base commander Lt. Col. Martin Binder said the local shipyard economy would employ them, but they disagree.

The Pentagon set aside $54 million to top off their pensions. But Nolan fears that if she has problems with her pension, she wouldn&#8217;t have anyone to turn to for help.

The U.S. military is undergoing tectonic shifts across the globe. So-called &#8220;host nation&#8221; employees from familiar places such as Germany and the United Kingdom and secluded locales such as Iceland often feel the pinch worst.

Still, for these imminently unemployed tradesmen, there is little comfort in the company.