A choir that includes some U.S. Air Force members sings at a prior Thanksgiving Eve service at the Ely Cathedral. (Courtesy of U.S. Air Force)

A choir that includes some U.S. Air Force members sings at a prior Thanksgiving Eve service at the Ely Cathedral. (Courtesy of U.S. Air Force) 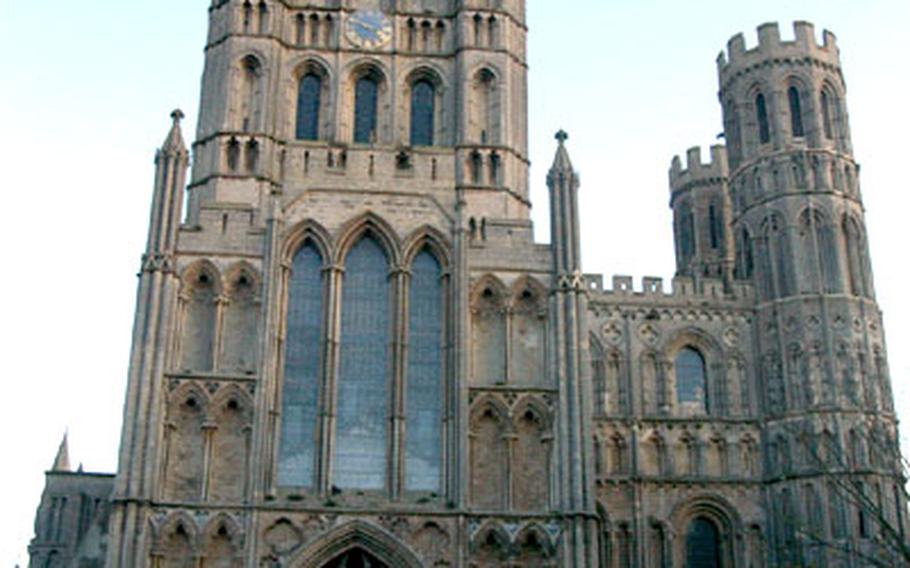 A special service is held every Thanksgiving Eve at the Ely Cathedral. The service — and the pie social that follows — draw more than 1,200 people, most of them Americans from nearby air bases. (Ben Murray / S&S)

Nobody seems to know just how long Americans have congregated at Ely Cathedral to celebrate Thanksgiving.

What anyone who has attended the Thanksgiving Eve service does know, however, is that it&#8217;s a tradition that translates well into a majestic setting of great history, beauty and serenity.

This annual gathering of U.S. servicemembers, civilians and family members assigned to air bases in England&#8217;s East Anglia region gives new resonance to a holiday that celebrates a sense of community and a time to give thanks.

&#8220;It&#8217;s an awe-inspiring place to gather, and this service just adds to it,&#8221; said RAF Lakenheath Chaplain (Capt.) Larry Kittle, who is coordinating the event for the second time.

Held the night before Thanksgiving, the service is intended to include members of every faith and denomination. Presented by chaplains from RAF Lakenheath and RAF Mildenhall, the service typically draws most of its participants from those bases and RAF Feltwell. However, a delegation from RAFs Alconbury, Molesworth and Upwood usually shows up, too.

And even with 1,200 seats to fill in the centuries-old cathedral, servicegoers who arrive a few minutes too close to the 7:30 p.m. starting time often find it standing-room-only.

It takes months to plan the ceremony and the logistics surrounding the event. Buses must be arranged to transport airmen and others without a ride to the cathedral. Special appearances by speakers and musicians have to be coordinated. This year, for instance, music will be provided by U.S. Air Forces in Europe&#8217;s Headwinds Woodwind Quintet and a combined choir of singers from Lakenheath and Mildenhall. Chaplain (Brig. Gen.) Cecil R. Richardson, deputy chief of the Air Force Chaplain Service, will speak.

Arrangements must be made with cathedral officials, too. Informally, contacts at the cathedral pencil the date in the year before, but formal coordination begins months in advance. Cathedral officials say they&#8217;re delighted to host the service. The dean of Ely Cathedral, the Rev. Michael Chandler, will introduce the service and welcome everyone.

And for some, the most important part of the service to arrange comes at the end of the whole affair: the pie social. After the service, seasonal treats such as pumpkin, mince pies and apple pies are served with coffee or tea in the cathedral foyer. That part of the service is particularly popular with Britons who attend, Kittle said.