British board game brings satire to war on terror 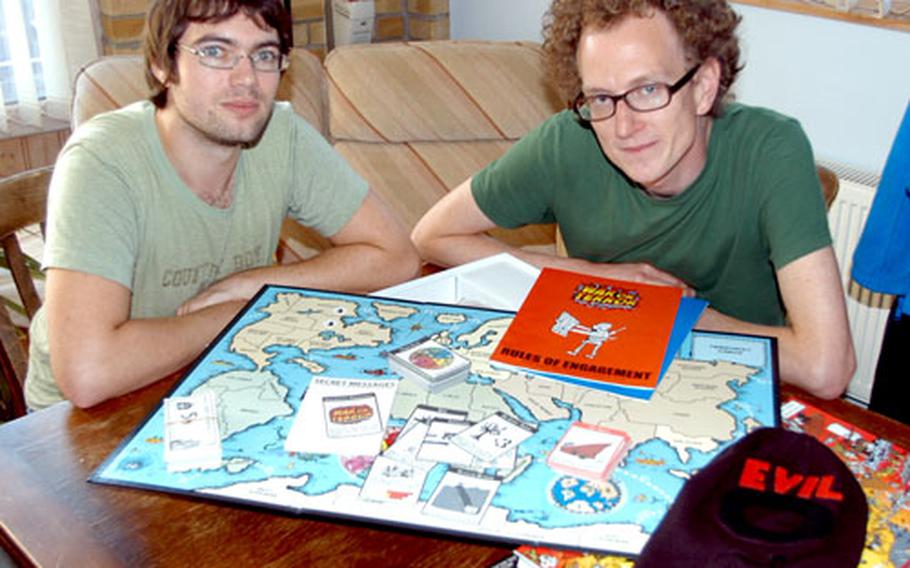 Friends Andrew Sheerin, left, and Andy Tompkins created the War on Terror board game, which is scheduled to launch Oct. 9. (Bryan Mitchell / S&S)

CAMBRIDGE, England &#8212; Andy Tompkins and Andrew Sheerin didn&#8217;t intend to ignite a controversy. They say they just want to promote good family fun &#8212; with a board game based on the war on terrorism.

The game, called War on Terror, is scheduled to be launched Oct. 9, but it is already drawing attention from the media and merchants. Specialty stores around the globe have expressed interest in it.

The two longtime friends and Internet business partners came up with idea for the game when they became frustrated with the state of world affairs during the run-up to the war in Iraq in 2003.

Their frustration came out in a satiric version of something they knew well: board games. The Web site developers, both 30, grew up playing Chutes and Ladders, and later, Monopoly and Risk.

&#8220;Risk is a world domination game. Ours is a world liberation game. Whether you are an empire or a terrorist, you have the same goal: To liberate the world.&#8221;

While the board looks much like a Risk board, the similarities end there. Territory is not conquered. Instead, oil is seized. Armies are not trampled. Empires are amassed and terrorists fight back.

The game sells for 26 pounds ($50) and is available on the Internet and specialty shops. It&#8217;s being produced by TerrorBullGames, a gaming company specializing in what the Cambridge men describe as &#8220;the nastier things in life.&#8221;

The game has drawn the ire of terrorism victims in the United Kingdom. The duo&#8217;s hometown newspaper, The Cambridge Evening News, ran a story about the game in which a victim of the July 7, 2005, London subway bombings described it as &#8220;beyond belief.&#8221;

The game does not refer to the Sept. 11, 2001, terror attacks or the London bombings. It does, however, poke fun at the U.S. military and its approach to fighting what it calls the global war on terror.

Soon they&#8217;ll learn if going that far over the top on such a polarizing topic will leave them wealthy, like winners in Life, or just back to square one, like a loser at Sorry.