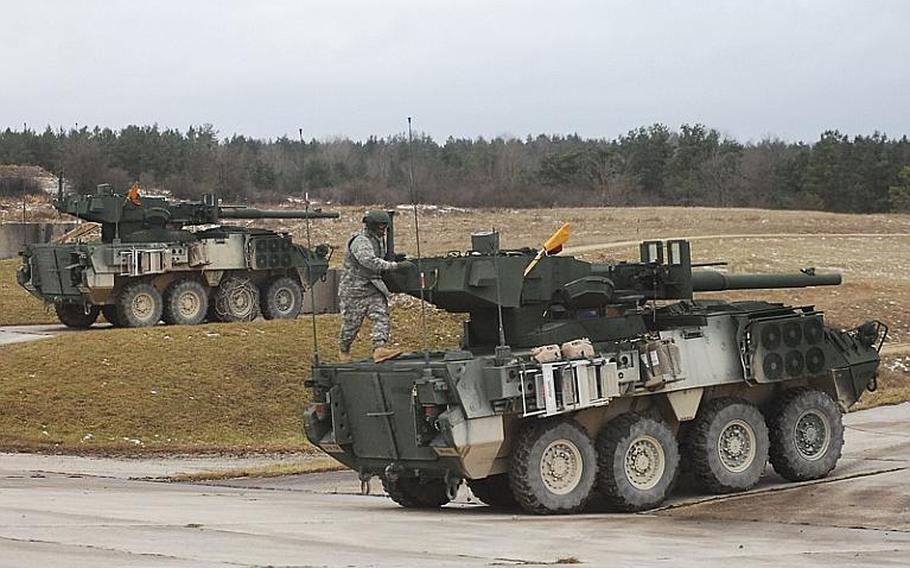 A soldier with the 2nd Cavalry Regiment circles the turret of an MGS variant Stryker armored vehicle during a live-fire exercise at the Grafenwöhr Training Area. (Steven Beardsley/Stars and Stripes)

GRAFENWÖHR, Germany — Army trainers in southern Germany are hopeful that a British exercise bringing some 2,500 troops to U.S. facilities might lead to similar training agreements in the future.

Spokesmen for U.S. training officials have called “Bavarian Charger,” which begins May 12 and runs through June 8, a “proof of concept” exercise to allow British forces to test the capabilities of U.S. training areas in Grafenwöhr and Hohenfels for possible future use.

The exercise brings British soldiers to Grafenwöhr for live-fire exercises and Hohenfels for maneuver training. British troops will also perform maneuvers in selected plots of German countryside outside military gates.

A spokesman for British Forces Germany said the exercise was nothing more than good training for forces unaccustomed to the area, as well as preparation for some who would move on to another large exercise in Canada in July. He said he believed the exercise was a one-time event.

“It’ll be challenging in Grafenwöhr and Hohenfels for our guys because they’re unfamiliar with the territory,” Lt. Col. Geoff Hinton said.

Yet the exercise comes at a time of tightened defense budgets in the United Kingdom and follows recent concerns over the U.K.’s major maneuver training grounds in Alberta, Canada. In a 2011 House of Commons debate, British members of Parliament, who recently visited the training grounds, suggested the Ministry of Defense rework an unfavorable cost-sharing scheme with the Canadian government and consider searching for new training grounds in Scotland or Germany.

Whether that request was formally made or acted upon was not immediately clear. The British Ministry of Defense did not respond by deadline to a request for clarification.

Tight budgets are spurring the U.K. to pull forces from Germany by 2019. More than 20,000 troops are currently stationed in the country’s north, where British troops have maintained a presence since World War II.

British forces are reimbursing USAREUR’s training arm, the Joint Multinational Training Command, for the costs of Bavarian Charger, including billeting and food services, according to training officials from both countries.

British forces, like their U.S. counterparts, are refocusing on large-scale maneuver and command-and-control following years of relatively small-scale counterinsurgency operations in Afghanistan.

The exercise also comes as U.S. Army Europe continues to look for multinational customers to train at both training areas, which fall under the command’s Joint Multinational Training Command.

Troops will travel from British garrisons in northern Germany, as well as the United Kingdom and Northern Ireland, for the exercise. Roughly 1,700 will participate in the training, most from battlegroups representing logistics, reconnaissance and infantry. A battlegroup is a battalion with support elements and enablers. Several hundred others will serve in support roles.

Several dozen soldiers from USAREUR’s training opposition force, the 1st Battalion, 4th Infantry Regiment, will participate in the exercise, Hinton said. Nearly 1,000 wheeled vehicles will be used, but only 12 tracked vehicles, Hinton said, although heavier tanks and artillery pieces will be loaded and shipped to maneuver areas instead of traveling across terrain, Hinton said.

Several local German officials later complained about the level of damage to private property caused by the exercise and the slow pace of the claims process. The Bavarian government recently told Stars and Stripes that countryside within 15 kilometers of Grafenwöhr and Hohenfels would not be used in the British exercise. Hinton, the British Forces Germany spokesman, said the exercise will still be allowed to transit through the buffer zones.

Lands to the east of the training area will be used for maneuver, including countryside in Schwandorf county and smaller training areas in Amberg, Oberviechtach and Pfreimd, he said.

“We’re very keen to work with the Germans in all that we do,” Hinton said.