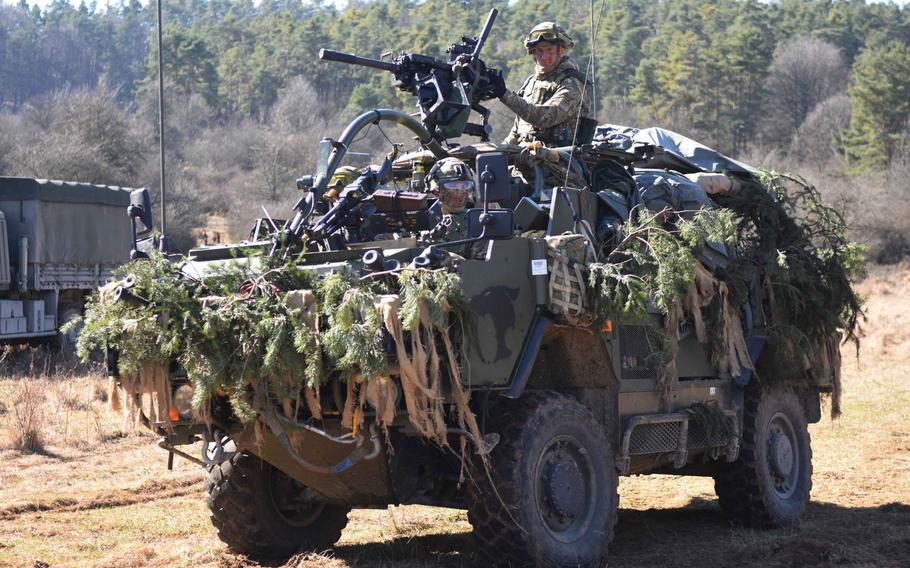 Buy Photo
British reconnaissance soldiers with the Light Dragoons train alongside the American 2nd Cavalry Regiment in preparation for their upcoming rotation to Poland. (Martin Egnash/Stars and Stripes)

Buy Photo
British reconnaissance soldiers with the Light Dragoons train alongside the American 2nd Cavalry Regiment in preparation for their upcoming rotation to Poland. (Martin Egnash/Stars and Stripes) 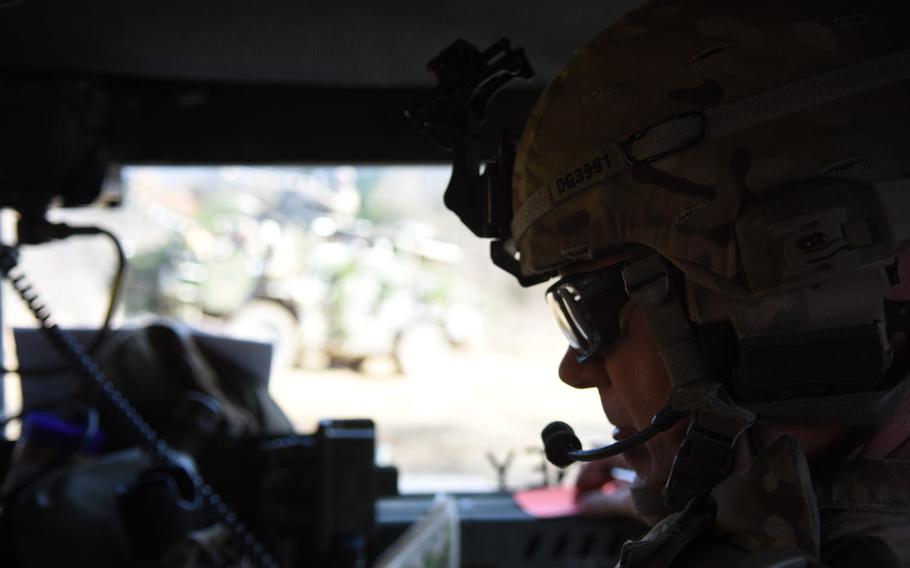 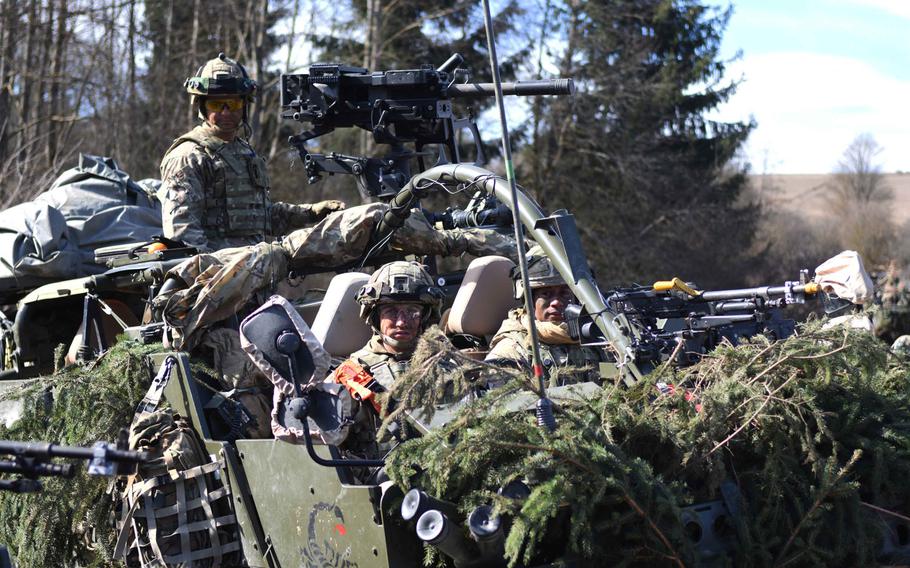 Buy Photo
British reconnaissance soldiers surveying an area as part of their training with the American 2nd Cavalry Regiment in preparation for their upcoming rotation to Poland. (Martin Egnash/Stars and Stripes) 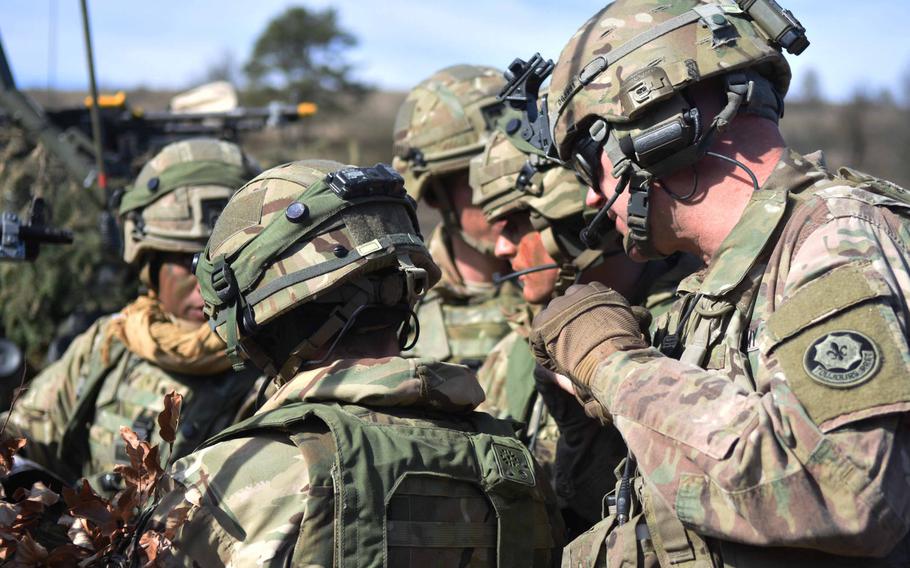 Buy Photo
American and British soldiers plan their route during training on Sunday, March 12, 2017, to prepare for their upcoming rotation to Poland. (Martin Egnash/Stars and Stripes)

HOHENFELS, Germany — When U.S. Army convoys move into eastern Poland later this month for a new NATO mission they will be joined by a contingent of British troops, part of a multinational force positioned less than 100 miles from the Russian enclave of Kaliningrad.

But to get ready, soldiers from the Vilseck, Germany-based 2nd Cavalry Regiment and troops from the British Light Dragoons had to overcome communication barriers, despite sharing the same mother tongue.

“We use completely different radios than the Americans do. And we can’t just take our radios and put them in the Americans vehicles, or vice versa,” said Maj. Noel Claydon-Swales, the commanding officer of the Light Dragoons regiment’s A squadron. “We have to learn how to get our radios to talk to each other. That’s our biggest struggle. But that’s why we’re here; to overcome those problems. And we’ve made massive steps forward.”

The Light Dragoons concluded five days of training Tuesday in Vilseck with the 2nd Cavalry Regiment, and part of that time involved Army technicians tinkering to get radios ready to operate together for a six-month rotation. The deployment, part of NATO’s effort to build up forces in Poland and the Baltics, marks the first time the two units have worked together.

One boon to the Anglo-American alliance is that both military units speak English as their first language. However, communication barriers still come up during operations.

“We don’t just speak a different dialect of English, we speak a different dialect of Army,” said Maj. James Anderson, observer controller during the exercise. “We have specific terms that mean something completely different to them. What we call ‘zone reconnaissance,’ they call ‘find and understand.' We need to make sure we’re all talking the same Army language, and understanding one another. It’s been a learning experience.”

Since both are light-armored reconnaissance units, the American and British forces conduct similar missions, but at times they go about them differently. The primary vehicle for the U.S. 2nd Cavalry soldiers is the Stryker Armored Fighting Vehicle. The Light Dragoons’ primary vehicle for reconnaissance is the much lighter Jackal Armored Vehicle, which has less armor, but higher top speeds, reaching up to 81 miles per hour.

“The British Jackal’s are very different than our Strykers,” Maj. James Perkins, the cavalry unit’s 4th Squadron executive officer said. “We’re learning how to best utilize both assets together. They are a little more mobile, and can go some places we can’t."

The Jackals have two mounted machine guns on their vehicles, which bring significant firepower. But they have less dismounts than the U.S. Strykers, so the Americans can send more troops on the ground.

Despite the differences, soldiers said they have struck up a camaraderie they expect to carry over during their deployment in Poland.

“When you go along and ask the boys, how are they finding it, everyone has a beaming smile on their face,” Claydon-Swales said. “The Americans have been friendly to help us and doing everything they can, and my blokes have also bent over backwards to make things work. I just think they complement each other really well."