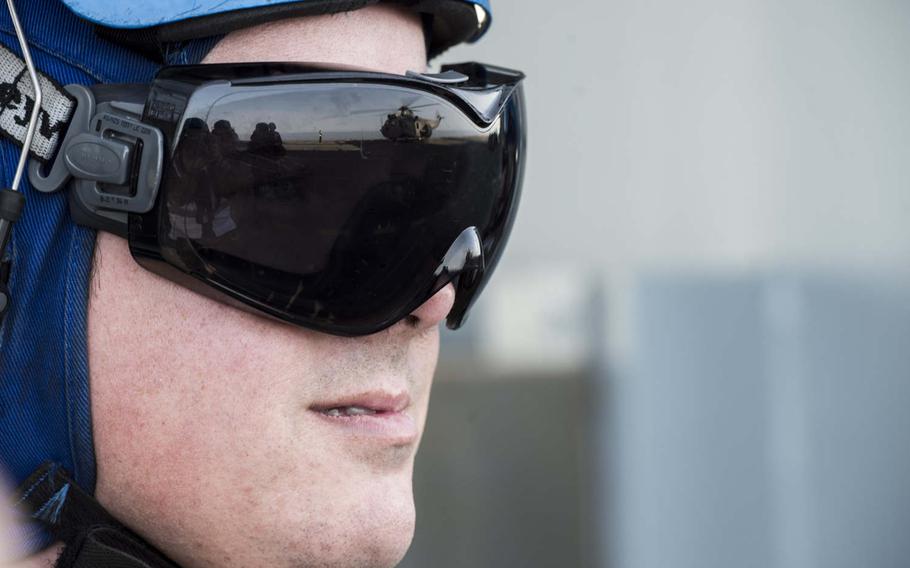 A flight crewmember on board the British navy's HMS Ocean stands by while helicopters land and take off in the Persian Gulf during exercise Unified Trident, Jan. 31, 2017. (Chris Church/Stars and Stripes)

A flight crewmember on board the British navy's HMS Ocean stands by while helicopters land and take off in the Persian Gulf during exercise Unified Trident, Jan. 31, 2017. (Chris Church/Stars and Stripes) 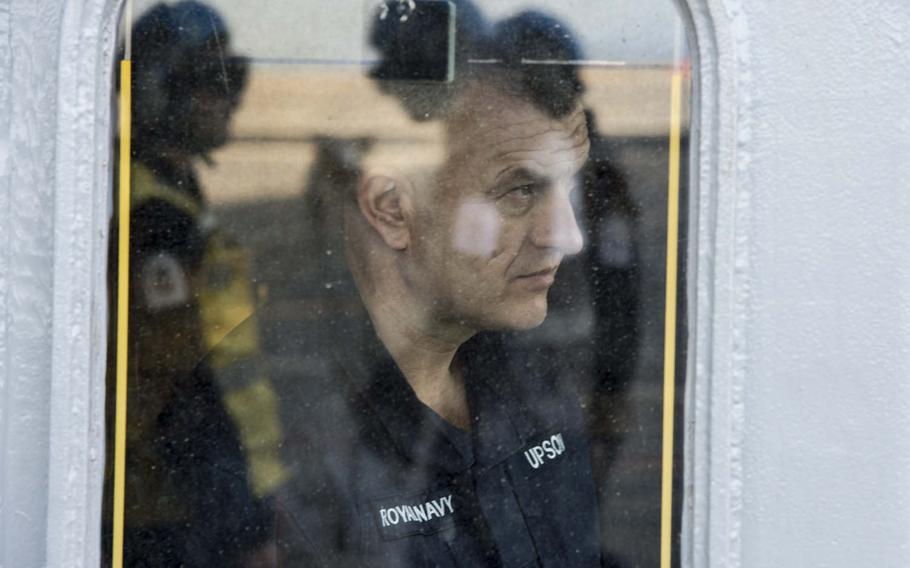 A British navy servicemember in charge of movement on the flight deck of HMS Ocean watches as helicopters land and take off in the Persian Gulf during the exercise Unified Trident, Jan. 31, 2017. (Chris Church/Stars and Stripes) 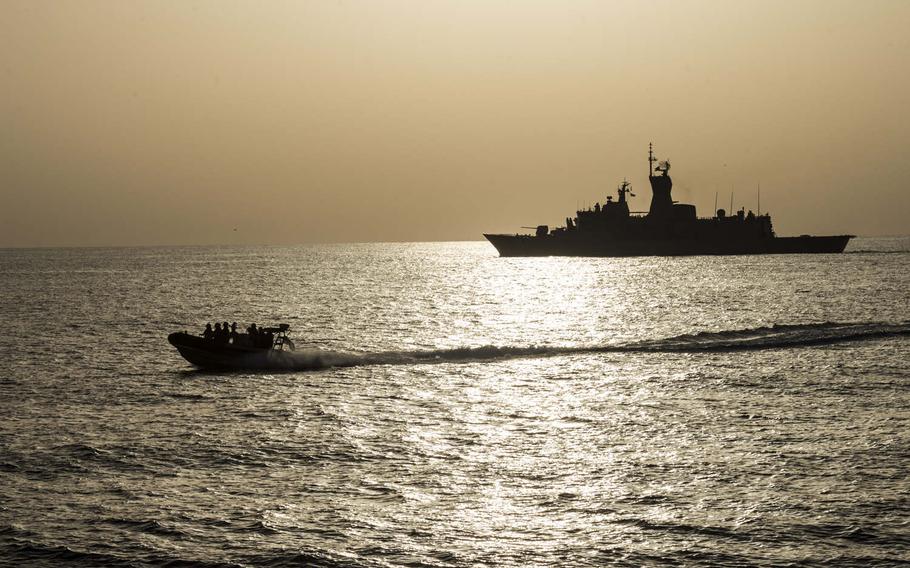 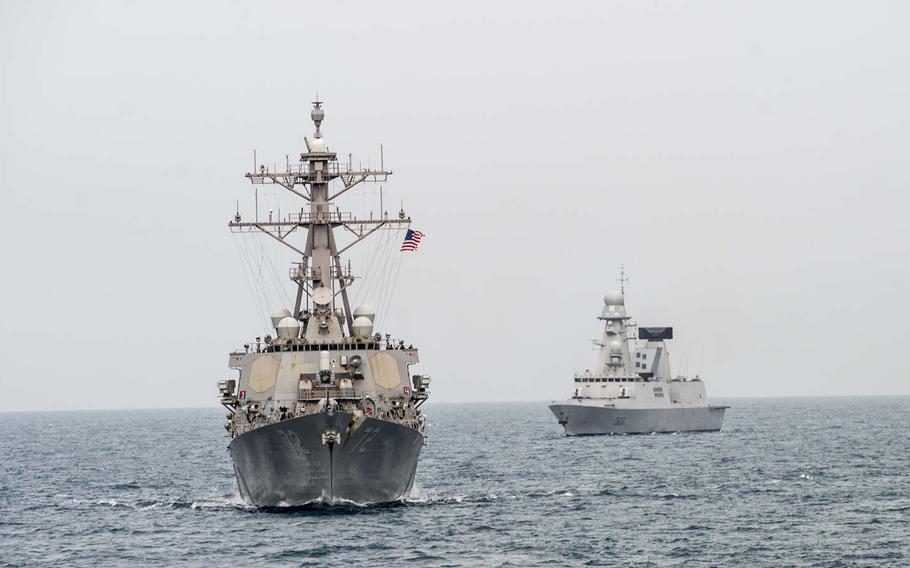 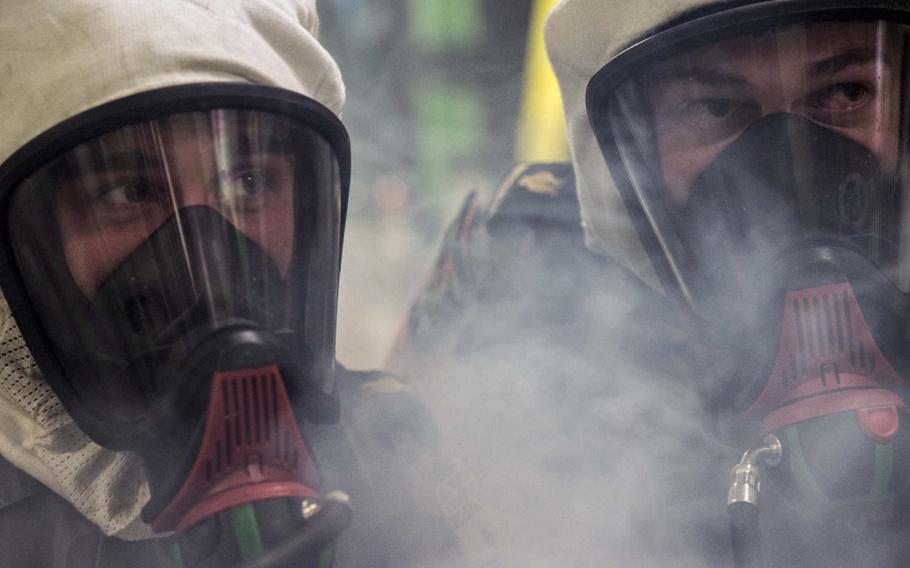 Sailors on board the Australia's HMAS Arunta check a smoke-filled space during damage control training as a part of exercise Unified Trident, Persian Gulf, Wednesday, Feb. 1, 2017. (Chris Church/Stars and Stripes) 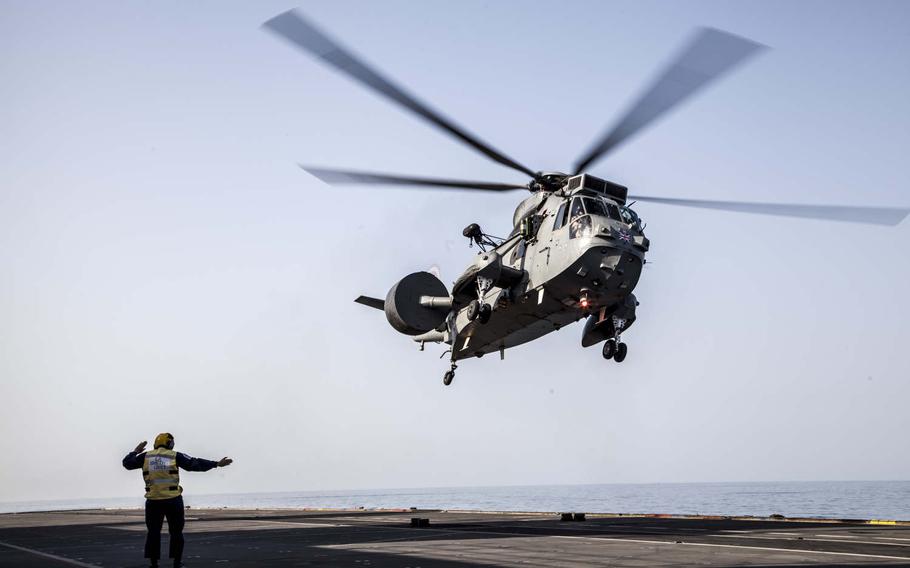 ABOARD HMS OCEAN — The Unified Trident exercise and the British navy’s current deployment in the Middle East at a time of rising tensions with Iran has given Britain a preview of the future as it prepares to introduce the new HMS Queen Elizabeth aircraft carrier, which is due to start sea trials later this year.

At some 65,000 metric tons, the Queen Elizabeth and its sister, HMS Prince of Wales, will be the biggest ships the British navy has ever built, and they mark Britain’s return to carrier-launched aircraft operations.

“I think we showed that we can bring a Queen Elizabeth carrier into this area of the world and operate it really effectively,” said British navy Commodore Andrew Burns, who led Unified Trident, a three-day exercise intended to bring together a multinational force to address all forms of maritime operations. “We can not only combine the carrier strike capability we are going to have, but we are operating really closely with all of the other combined task forces that work for 5th Fleet.”

The return to carrier strike operations is still some time off, as the first of the $3.74 billion carriers isn’t expected to be operational until 2020. Last week, the United Kingdom’s minister of defense procurement said the Queen Elizabeth’s sea trials would be delayed.

When the 920-foot-long carriers enter the British fleet, they’ll operate with the F-35 joint strike fighter.

The carriers will be able to operate anywhere in the world, and it’s likely they’ll deploy to the Middle East at some point, Burns said.

For Burns, who since November has led NAVCENT’s Task Force 50, bringing all the task forces together for the exercise was the culminating event of the deployment after smaller exercises were conducted with all of the task forces individually.

Task force 50 is responsible for planning and conducting strike and contingency operations in the 5th Fleet area of responsibility. It is normally led by a U.S. aircraft carrier strike group commander.

Besides the U.S. Navy and Coast Guard, the exercise brought together more than 15 ships from the British, Australian and French navies, along with a number of other assets, including various aircraft platforms in the Persian Gulf.

“My job as the principle afloat commander in the 5th Fleet area of responsibility, it could be that I need to aggregate those forces in the 5th fleet AOR, and this exercise is putting that to the test,” Burns said. “It’s proving that we can do that and proving that we can continue to maintain that high standard of command and control.”

The exercise and the entire deployment are about more than just working alongside the U.S. and allied partners, Burns said. They’re about “true integration.”

By having several navies working together, a task group is better equipped to meet security challenges than any one country would be alone, he said.

The U.S. imposed sanctions on Friday, after the exercise concluded, in response to a ballistic missile test Iran carried out last week. As Iran conducted military exercises Saturday, an Iranian Revolutionary Guards commander said Teheran would use missiles to defend its security, Reuters reported.

U.S. defense officials believe the missiles and other equipment may have been supplied by Iran, though Tehran has denied helping the Houthis.

The USS Cole has begun operating off the coast of Yemen since the Saudi ship attack. The Cole itself was the target of a 2000 attack by al-Qaida in Yemen that killed 17 sailors.

Unified Trident involved scenarios addressing threats in subsurface, surface and air environments, Burns said. Some of the threats coalition forces defended against during the exercise appeared similar to recent events involving Iran, such as the confrontation of allied ships by fast-attack craft. But officials emphasized that Unified Trident wasn’t a response to any specific threat.

“I think if you look hard enough at the scenario, you could apply it to a number of parts of the world where there is instability that spills into the maritime domain,” Burns said. “It’s a generic scenario, and the sort of exercise we are conducting in all of the warfare environments.”

The U.S. has seen the number of “unsafe and unprofessional” incidents between the U.S. and Iran jump from 23 in 2,015 to 35 last year, though the percentage of such incidents slipped slightly, said Cmdr. Mark Davis, commanding officer for the USS Mahan, which recently fired warning shots to warn off Iranian speed boats.