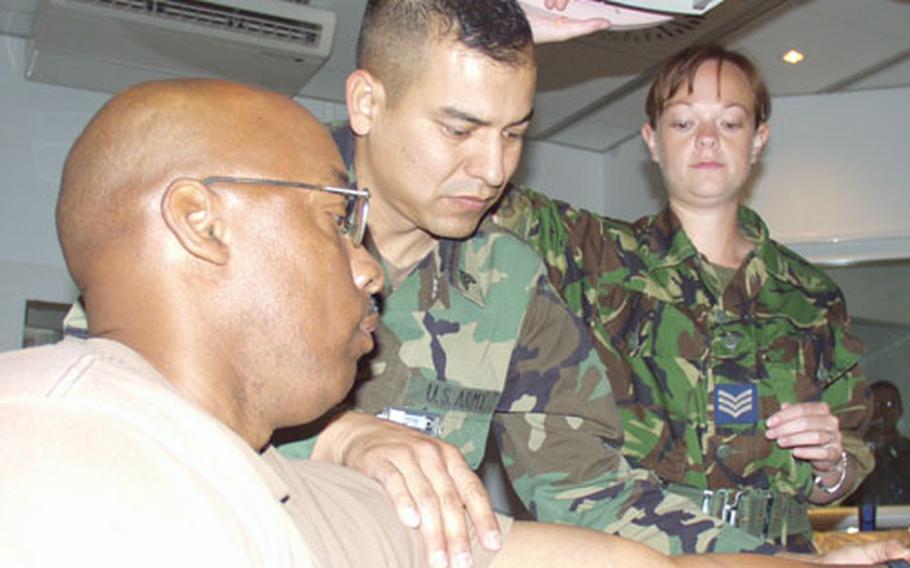 U.S. and British doctors will no longer be working side by side at the hospital at Camp Bondsteel, Kosovo, after the British government announced it was pulling its doctors out of the facility. (Jessica Iñigo / S&S)

CAMP BONDSTEEL, Kosovo &#8212; The United Kingdom is pulling its doctors out of the U.S. Army hospital here, saying British soldiers are being stretched too thin.

British doctors, who arrived at the camp hospital in May 2001, provided specialty and surgical care to patients, said Col. Donald Cavallo, commander of the U.S. Task Force Med Falcon.

But now, because British soldiers are taking part in so many military operations around the globe, the doctors are needed elsewhere, said British Maj. Ben Banerjee, commander of the U.K. contingency. The British doctors will leave Kosovo on Tuesday.

Emergency replacement doctors from the European Medical Command in Germany are pulling three-to-six-week rotations to fill the void, Cavallo said.

But that void runs much deeper than just missing personnel, according to the Task Force Med staff. The British and American troops became friends.

Working in an environment with similar medical practices as well as a similar language proved to be more fun than work, they said.

Integrating the hospital staffs was a learning experience because the medical personnel often cross-trained each other, Banerjee said.

Because the British troops impacted the surgical capabilities so much, Cavallo said, servicemembers will no longer be offered elective surgeries.

In addition, Army requirements will become greater for future units coming to the U.S. Army hospital, he said. A change of command is scheduled for November, and Cavallo said the key positions are already being worked into the deployment plan to ensure proper medical care will be provided by the new unit.