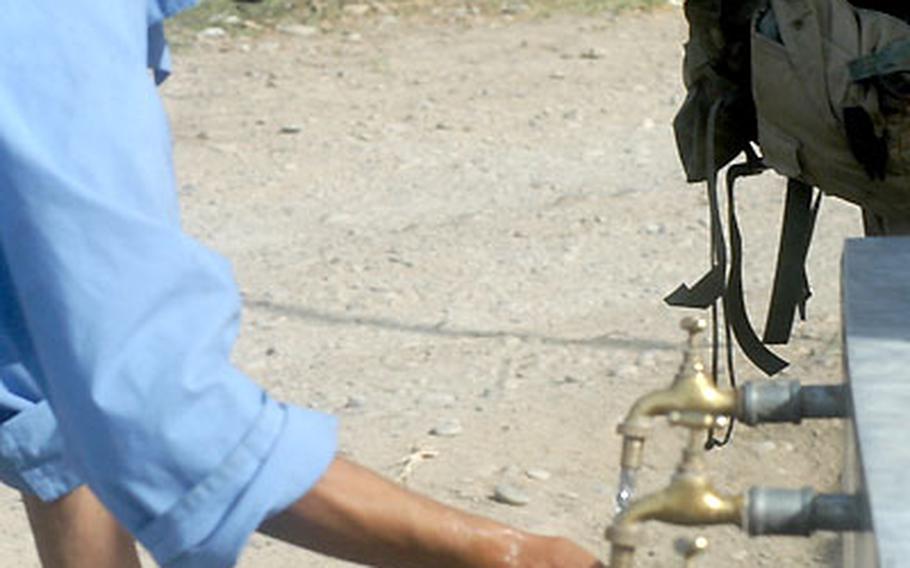 An Iraqi man draws clear, healthy water from a new well built in his village of Jowezrat. A plan is underway to drill 250 wells in central Iraq to replace the foul water now used by many people for everyday living. (Ron Jensen / S&S)

An Iraqi man draws clear, healthy water from a new well built in his village of Jowezrat. A plan is underway to drill 250 wells in central Iraq to replace the foul water now used by many people for everyday living. (Ron Jensen / S&S) 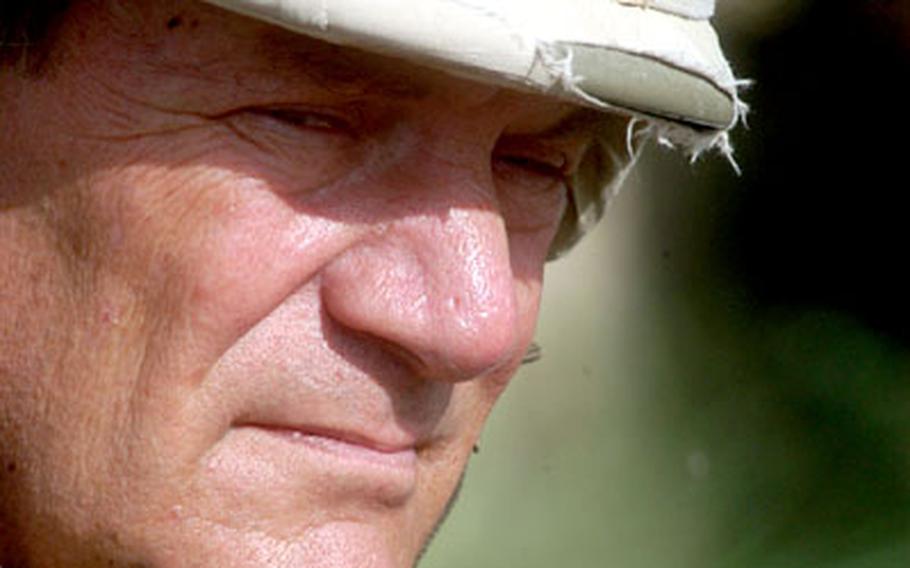 But to Fritz, a member of the 308th Civil Affairs Brigade from Homewood, Ill., his vision is as clear as the unblemished Iraqi sky.

For Fritz and other members of the Army National Guard unit, that means drilling 250 water wells throughout the area between the cities of Baghdad, Fallujah and Tikrit &#8212; a region known as the Sunni Triangle. They want to tap into an underground reservoir that can change the lives of the people who live here.

This is an agricultural area, crisscrossed with fields of everything from corn to cabbage, tomatoes to watermelon. Sheep and cows graze the ditches and the small pastures.

The crops rely on irrigation, and the area has become a warren of ditches and canals that carry water from the nearby Tigris River to the small farms.

But the water is not only used for crops and pastures. It is the drinking water, the cooking water and the bathing water for the families.

It is terrible, putrid water. It is filled with the waste of humans and animals. Most small villages, Fritz said, have no sewer systems. The sewage finds its way into the water. Animal waste used as fertilizer on the fields also drains off into the ditches.

So far, the wells project, which is being funded by the U.S. Agency for International Development through various third parties, is a fledgling one. Only five wells have been drilled and only three of them are producing water.

But the beauty of the idea is already apparent.

&#8220;This well is a big service,&#8221; said Mohammad Salih, who lives in Jowezrat, one small village with a working well.

Three spigots can be turned to allow the water &#8212; clear and clean &#8212; to flow from the 3,000-gallon storage tank above ground. People come from all around to gather the water in buckets or cans and carry it to their homes.

Nearby is a ditch filled with the tepid, ugly water. Salih said they often boil that water when it is used, but not always. A fire requires fuel, and fuel has a cost.

The well, he said last week, is a symbol of the friendship between Americans and the Iraqi people.

But it&#8217;s not that easy. For example, the people of Jowezrat have received a threat from unknown persons warning them not to use the well. Fritz can&#8217;t fathom such a philosophy and wonders why the &#8220;bad guys&#8221; don&#8217;t just let America fix the country and leave.

But the difficulties such warnings cause does not deter the 308th Civil Affairs, which is determined to put 250 wells in this area. A Kurdish well driller has been hired because he has the necessary equipment and expertise.

The wells are being drilled near schools, which are on public land. Fritz said he doesn&#8217;t want them on private land where the landowner might someday decide the well belongs to him and charge people to use it.

There&#8217;s an additional benefit, said Col. Jeff Yeaw of the 308th. Having the wells next to the schools brings people to the schools, which is a good thing.

Giving the villages clean water, Yeaw said, will eliminate many of the diseases and ailments the dirty water causes in children.

The civil affairs troops frequently visit the schools, which are mostly sad and drab affairs. The floors are dust-covered and the ceilings and walls are in need of plaster and paint.

There is a plan, too, for ensuring the wells are maintained after they are in operation. That task has fallen to a French nongovernmental organization, Agency for Technical Cooperation and Development.

&#8220;We need the community to take care of these assets that are being created,&#8221; said Stephane Nicolas, who is in Iraq to establish committees in each town with a well that will maintain and care for the wells.

There is no timetable to finish the wells. Each one is considered a success story, a step toward a healthier future for the children and a move in the right direction for the recovery of Iraq.