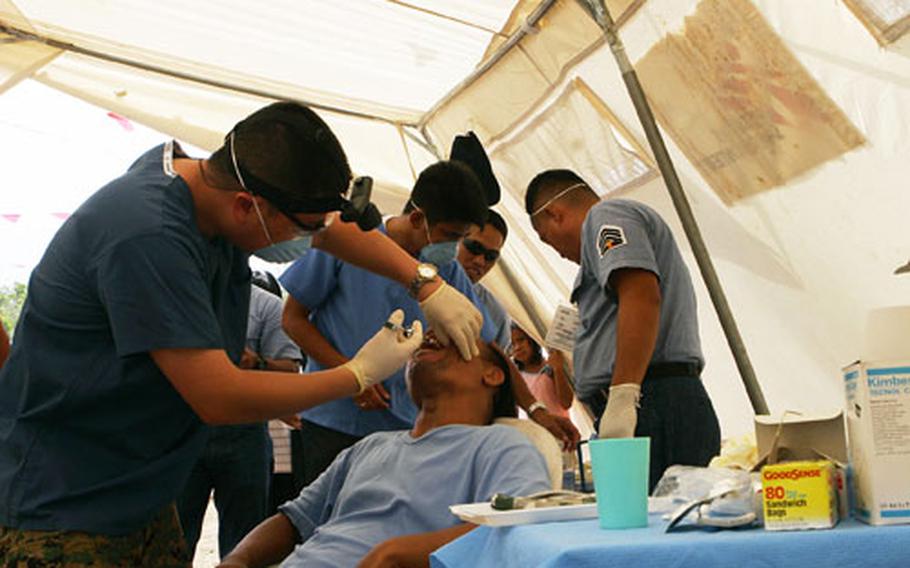 U.S. Navy Lt. David Liu gives a patient a shot to numb his mouth before performing a dental procedure. U.S. Marines and sailors from the 3rd Marine Expeditionary Brigade along with sailors from the USS Comstock are in the Philippines as part three of this year&#39;s Operation Goodwill. (Daniel R. Todd / Courtesy the U.S. Marines)

CAMP FOSTER, Okinawa &#8212; Two teams of medical providers with the 3rd Marine Expeditionary Brigade from Okinawa and San Diego-based USS Comstock recently worked with their Philippine counterparts to help people in evacuation and transition centers in Legazpi City on Luzon.

More than 15,000 people displaced from their homes after a series of natural disasters in early December had been left with scant medical attention, according to U.S. Navy Capt. David Lane, the Medical Detachment Commander for Operation Goodwill.

&#8220;There was a shortage in medical care in the area before the devastation of the people&#8217;s towns, and now there are no medical clinics for the people,&#8221; Lane was quoted in a brigade press release.

For many patients, it was the first time they had received medical attention.

&#8220;The number of patients who came through and haven&#8217;t been able to get the proper medical attention was astounding,&#8221; said U.S. Navy Petty Officer 3rd Class Courtney Preaster.

During Operation Goodwill, which is taking place March 13-18, the Marines and sailors are repairing two schools, treating patients at six evacuation or transition sites and conducting community clean-up projects at three different locations, all in the Legazpi City area.

Marines on Okinawa created Operation Goodwill in 2003 to show their appreciation to Filipinos for welcoming them during annual exercises, according to the release.Change of command for Navy on Guam

Change of command for Navy on Guam

Rear Adm. William D. French has been named the new commander of U.S. Naval Forces Marianas in Guam. He will relieve the current commander, Rear Adm. Joe Leidig, during an April 17 ceremony.

French is currently the commander of Navy Region Northwest at Bangor, Wash.

Leidig has been assigned as the director of U.S. Naval Forces Europe Sixth Fleet out of Naples, Italy.

Lt. Heath Schroeder, 28, died March 11 at U.S. Naval Hospital Guam after the accident, according to a Navy press release. Schroeder also was assigned to the hospital.

The accident happened early March 11 in the village of Yona. Guam police found Schroeder was driving 83 mph in a zone designated for 35 mph, according to spokesman Officer Allan Guzman.