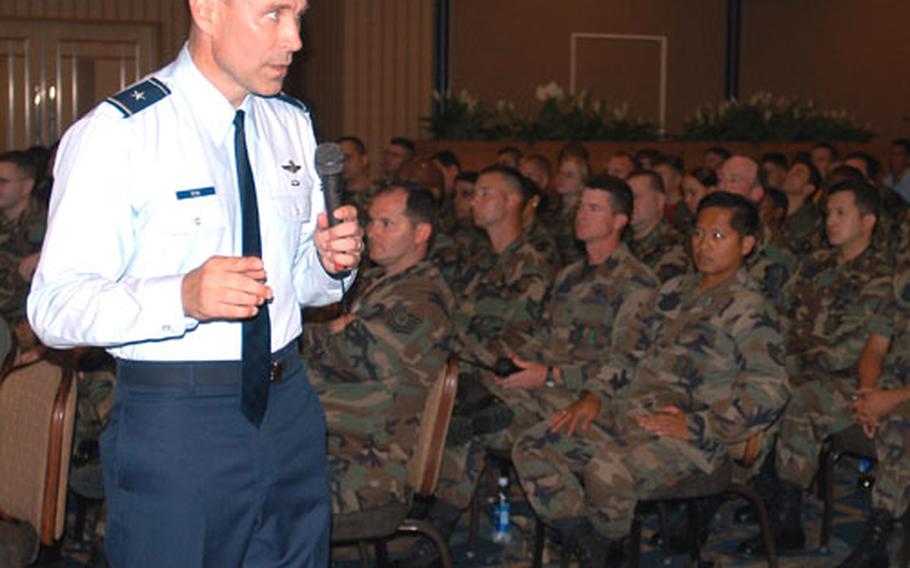 Brig. Gen. Bill Rew, commander of Misawa&#39;s 35th Fighter Wing, talked to airmen Friday during the base&#39;s Sexual Assault Facts and Education briefing. The training is now mandatory for all Pacific Air Forces personnel following a review last year that found 92 reports of rape in PACAF from 2001 to 2003. Rew wants feedback from Misawa airmen on how base leaders can improve the SAFE program. (Jennifer H. Svan / S&S)

Brig. Gen. Bill Rew, commander of Misawa&#39;s 35th Fighter Wing, talked to airmen Friday during the base&#39;s Sexual Assault Facts and Education briefing. The training is now mandatory for all Pacific Air Forces personnel following a review last year that found 92 reports of rape in PACAF from 2001 to 2003. Rew wants feedback from Misawa airmen on how base leaders can improve the SAFE program. (Jennifer H. Svan / S&S) 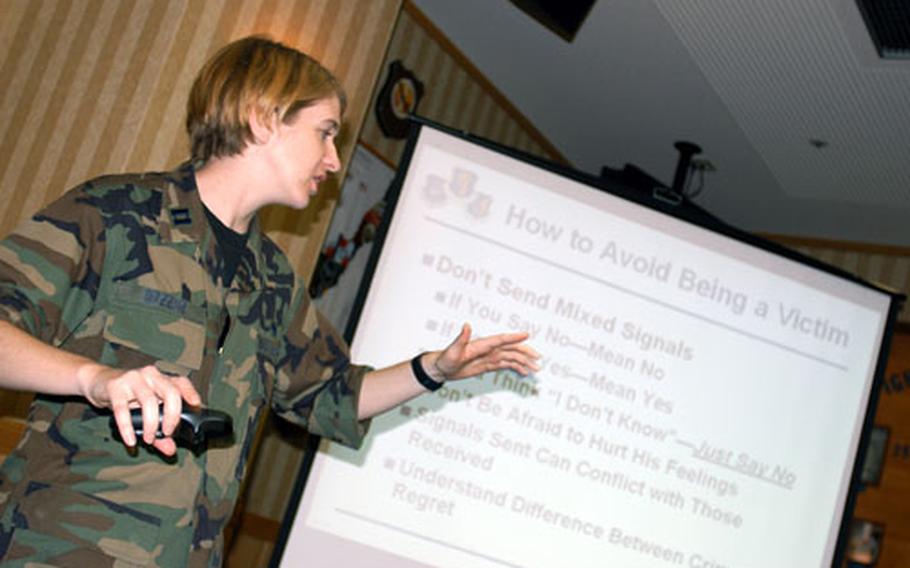 Capt. Melinda Greene, the assistant staff judge advocate for Misawa&#39;s 35th Fighter Wing, led a separate briefing for female airmen on sexual assault, advising them on ways to avoid a potentially dangerous situation and how to report an incident if they think they were raped. She also talked about false reporting and not to confuse regret with a crime. (Jennifer H. Svan / S&S) 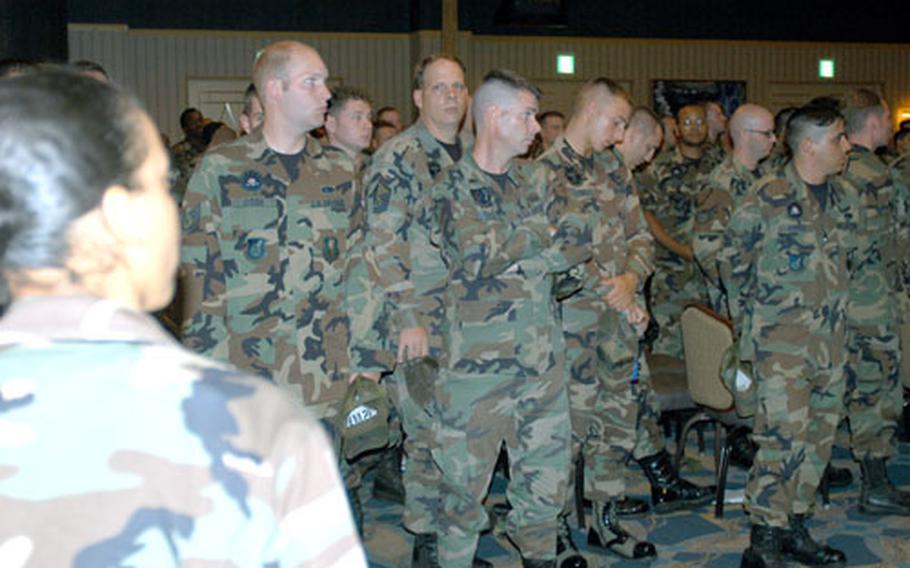 MISAWA AIR BASE, Japan &#8212; About 4,000 airmen at this northern Japan base are required to sit through two hours of frank talk about sex.

PACAF mandated the training after the Begert study found 92 reports of rape from 2001 to 2003 and flaws in how the cases were handled.

Most bases have already held initial SAFE briefings. Misawa held its first sessions Thursday and Friday at the Mustsu Officers&#8217; Club. Brig. Gen. Bill Rew said the 35th Fighter Wing could have started the training sooner but he wanted to fine-tune the message and delivery, targeting it to airmen under 25, the age group most likely to be involved in sexual assault cases, according to PACAF figures.

Rew said he sat through the briefing for the first time about six weeks ago.

Under the direction of Lt. Col. Eric Bee, the 35th Fighter Wing staff judge advocate, the program was revamped to get the attention of the Air Force&#8217;s youngest members. PACAF provided a training module but gave each base flexibility to tailor their programs, officials said.

Friday&#8217;s briefing began with a videotape: Members of Misawa&#8217;s theater guild acted out a scenario in which two airmen, a man and woman, begin the evening drinking with friends. Both get intoxicated and end up in the male&#8217;s room. He gives her a foot massage and the video skips ahead to the next morning, where the airmen wake up in bed together, and the female looks shocked and ashamed as she quickly looks under the covers.

The question of whether sexual assault occurred always comes down to consent, he said, and alcohol complicates the issue.

Bee and Capt. Melinda Greene, the wing&#8217;s assistant staff judge advocate, said voluntary intoxication is not a defense, and in such a case, the man could be found at fault.

A Misawa first sergeant backed that lesson with a story about an airman he knew who spent 18 months locked up for rape. Both were drunk. She thought she was saying &#8220;yes&#8221; to her boyfriend, he said.

Men and women were separated for a portion of the briefing. Bee spoke to the men, driving home the point that &#8220;no means no.&#8221;

Sexual assault isn&#8217;t defined in the Uniform Code of Military Justice, but can fall under a range of crimes, from rape or attempted rape to indecent assault and indecent acts, Bee said.

In a separate room, Greene told the women not to get so drunk that they lose control or awareness; if they plan to drink heavily, enlist a buddy to look out for them, she suggested.

She gave examples of passive resistance if alone with a male in an uncomfortable situation: Get a Coke and walk out the door or pretend to have a sexually transmitted disease.

Other topics covered included false reporting &#8212; don&#8217;t mistake regret for a crime, Greene said &#8212; and how to report a suspected rape. Cards with telephone numbers for agencies such as law enforcement and the emergency room were passed out.

Staff Sgt. Ronell Taylor, 26, a unit deployment manager for the 35th Communications Squadron, said the training was helpful, &#8220;especially for the young guys straight out of basic training and tech school. Most of them are 18 or 19, they&#8217;re still immature and don&#8217;t know the ins and outs of consent.&#8221;

The briefings are just one way Misawa leaders hope to address the issue of sexual assault. In response to the PACAF study, the base formed a sexual assault response team composed of various agencies, from the Office of Special Investigations to the chaplain.

Working with the Navy at Misawa, which already has a program, the base is training victim liaisons &#8212; volunteers on call 24 hours a day to help a possible rape victim cope and seek appropriate services.

SAFE in the Pacific

Here&#8217;s a look at Sexual Assault Facts and Education (SAFE) training throughout PACAF:

&#8226; Kadena Air Base, Okinawa: More than 4,500 personnel at Kadena already received a SAFE briefing, according to base spokesman Chip Steitz. Newcomers and those who missed the initial briefing can catch the training the third Tuesday of every month in Keystone Theater. The briefing for male airmen is at 9 a.m.; female airmen attend the 11 a.m. program. The training is required annually.

&#8226; Yokota Air Base, Japan: Yokota held its first SAFE briefing in June, according to base officials. Newly assigned base personnel and those who didn&#8217;t go in June are required to attend the next SAFE briefing Tuesday in the base theater at 8 a.m. (women) and 9:30 a.m. (men).

&#8226; Misawa Air Base, Japan: Four sessions were held last week. The next sessions are set for Monday, Tuesday and Wednesday in the Mutsu Officers Club Ballroom. Two sessions take place daily at 8 a.m. and 1 p.m. The briefing is required for all wing personnel and open to all base residents; tenant command members are encouraged to attend.

&#8226; Andersen Air Force Base, Guam: About 900 people attended the first SAFE briefing at Andersen on June 25, base officials said. The next two are scheduled Tuesday and Thursday at the base theater for the following times: women, 1 p.m.; men 2 p.m. and 3 p.m. The training is mandatory for all Andersen active-duty personnel and civilians.

&#8226; South Korea: No briefing dates were available from either the 51st Fighter Wing at Osan Air Base or the 8th Fighter Wing at Kunsan Air Base. Officials from both bases, however, said they have multifaceted and robust SAFE programs and are in compliance with the terms of the program. Airmen at both fighter wings receive SAFE training upon arrival to the wing &#8212; the same day their plane lands, officials said. Each wing also holds two &#8220;commander&#8217;s calls&#8221; sessions yearly at which SAFE material is addressed prominently. Osan plans to hold sexual assault victim liaison training next month.