Bridging a gap between bureaucracy and power 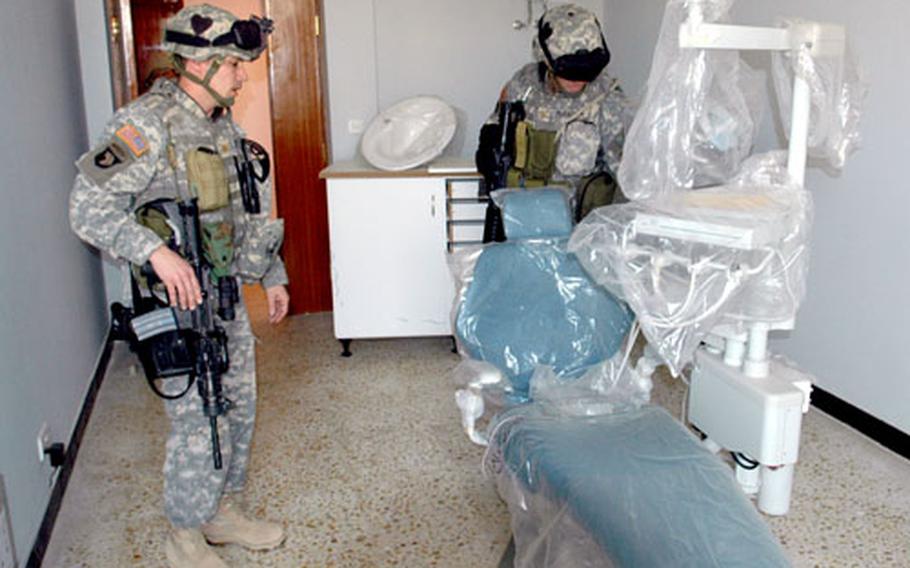 U.S. soldiers inspect a nearly completed medical clinic in Mahmudiyah, which a private nongovernmental organization may run until the Iraqis are ready to take over active management. (Andrew Tilghman / S&S)

MAHMUDIYAH, Iraq &#8212; After months of work, U.S. troops got a water treatment plant up and running, pumping drinkable water through the area&#8217;s pipelines for the first time in years.

But within days, the plant&#8217;s operations ground to a halt. The problem: Iraqi officials ran out of fuel to run the generator that powered the massive facility.

Although the water plant project was &#8220;completed&#8221; and turned over to the new Iraqi government, the U.S. troops overseeing the area had to step in to provide further assistance. They showed the local plant mangers how to file a formal request for more fuel with the Iraqi Ministry of Water and simultaneously notified officials at the U.S. Embassy to ensure the order did not fall through the cracks of the fledgling bureaucracy.

In an increasingly common scenario across Iraq, troops who have planned and executed civil military projects here are moving into a third phase of the reconstruction, one that involves ongoing support to the Iraqi government officials who maintain and operate the U.S.-funded facilities.

&#8220;In my opinion, we may have made progress faster than they are able to maintain it,&#8221; said Sgt. 1st Class Jeff Fenlason, who has worked on civil military projects for the 101st Airborne Division&#8217;s 2nd Brigade Combat Team.

Helping the Iraqis learn to manage the hundreds of new public works projects across the country is called &#8220;the bridging strategy,&#8221; according to Maj. Eric McFadden, who runs the brigade&#8217;s reconstruction unit. &#8220;It&#8217;s part of the transition to local self-government. We help walk them through the problem-solving process.&#8221;

U.S. forces consider civil reconstruction to be a vital tool for defusing violence in Iraq, hoping that public works projects will bolster confidence in the new government and undermine support for the ongoing insurgency.

For now, however, U.S. troops are actively supporting the government ministries such as water, electricity, health and sanitation as Iraqis struggle to create effective public services like those Americans take for granted at home.

&#8220;These are government officials who are getting a paycheck and what we are going to do is hold[ing] them accountable for what they are supposed to be doing,&#8221; said Lt. Col. Thomas Kunk, commander of the 1st Battalion, 502nd Infantry Regiment.

Troops here overseeing a swath of cities and farmland about 25 miles south of Baghdad have recently completed about 20 projects, including the renovation the water treatment plant, a new medical clinic, several schools and a police station. Road repair projects and trash collection services are also under way.

For example, the Baghdad bureaucrats who oversee the Ministry of Electricity have been snubbing this predominantly Sunni area by funneling electrical transformers and other resources to other regions, said Sgt. 1st Class Alan Certain, who works with the civil affairs unit attached to the 2nd BCT.

In some cases, U.S. troops are also turning to the private sector to provide indirect support to the Iraqi government. As several health clinics near completion, soldiers are planning to put together a private contract with a nongovernment organization to staff and supply the clinics for about two years, getting the facilities up and running while the Ministry of Health prepares to take over active management.

Now, soldiers are working with the sanitation officials to expand the trash services and to seek long-term funding through their own government in Baghdad.

&#8220;That may be an example of the tipping point,&#8221; McFadden said. &#8220;There was enough of a spark and visible change from the initial project that it caused the Ministry of Sanitation to take over the program.&#8221;

It is important for Iraqis and U.S. troops to understand that the final goal is for Iraqi self-government and self-sufficiency.