Bosnian returnees to the village of Trakilovici cross the newly opened bridge in their village on Saturday. The Finnish Civilian Military Cooperation team helped rebuild this bridge and another, plus 3.5 kilometers — about two miles — of road to show the pre-war Serb villagers that their return to their former homes will be supported. (Ivana Avramovic / S&S)

Bosnian returnees to the village of Trakilovici cross the newly opened bridge in their village on Saturday. The Finnish Civilian Military Cooperation team helped rebuild this bridge and another, plus 3.5 kilometers — about two miles — of road to show the pre-war Serb villagers that their return to their former homes will be supported. (Ivana Avramovic / S&S) 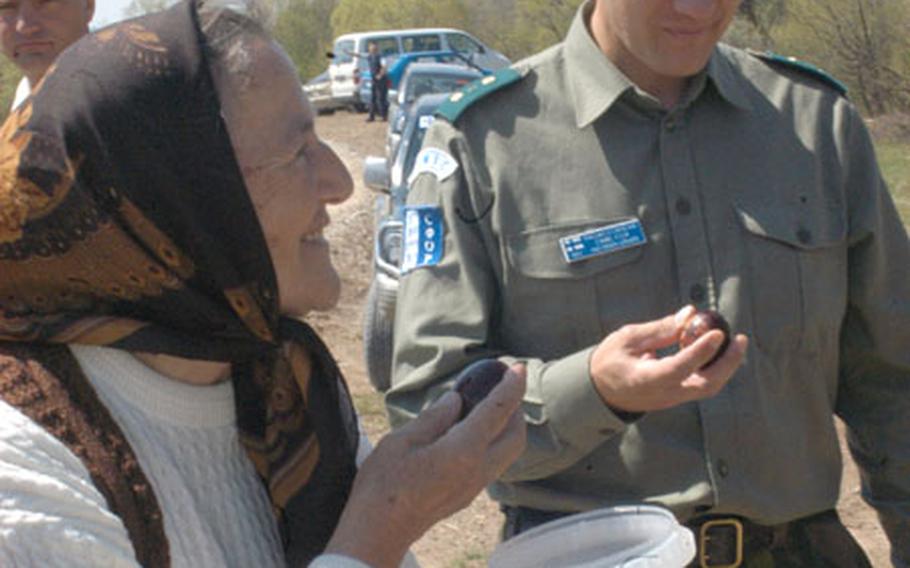 Slavka Trakilovic gives Easter eggs to a member of the Finnish Civilian Military Cooperation team Saturday at the road and bridge opening in the village of Trakilovici, a few miles northeast of Tuzla, Bosnia and Herzegovina. Trakilovic prepared eggs to celebrate Orthodox Easter the next day. (Ivana Avramovic / S&S)

To help celebrate the gift presented to her village of Trakilovici, Slavka Trakilovic attended the opening with Easter eggs for the Finnish troops who helped in the reconstruction.

Trakilovic, a Bosnian Serb, shared the eggs she had prepared for the Christian Orthodox Easter on Sunday. It was a way of saying thanks.

When Trakilovic returned to her pre-war village in December, the road was virtually impassable except for sports-utility and Stabilization Force military vehicles. The two bridges did not exist.

But it is because of her return &#8212; and that of other displaced persons &#8212; that the roadway and bridges have importance.

&#8220;There&#8217;s no use nowadays for this construction if there is no return that follows,&#8221; said Finnish Army Capt. Jussi Viinam&#228;ki, the 3rd Civilian Military Cooperation team leader.

Two hundred fifty families are trying to return to former homes in this area of rolling hills sprinkled with dilapidated houses.

The Serb population in the area, a few miles northeast of Tuzla, began returning started two years ago, Viinam&#228;ki said. It has not been easy going.

Some of them have been living in poor conditions in the basements of destroyed houses. Other houses have been rebuilt by different humanitarian agencies. The Finnish Ministry of Foreign Affairs provided construction material for 10 houses, and enough for an additional 15 homes is expected soon.

To make the return to the homes easier, the Finnish CIMIC troops, who will be closing their operations in July and leaving the country, began the road project six months ago.

First, they had to find donors for the road reconstruction. Once the ministry donated 65,000 euros and the Tuzla municipality provided the needed gravel material and culverts for the macadam road, construction on the approximatley two miles of roadway began. It took three months.

The CIMIC troops who patrol the return areas always double- and triple-check with the office of the United Nations High Commission for Refugees and the Bosnian Ministry of Refugees and Displaced Persons to make sure that the reconstruction will help those who want to return once houses and roads are rebuilt. They don&#8217;t want to fix up homes that will sit empty.

Several houses donated in 2001 are unoccupied, but there are people who are interested in taking them over once living conditions and transportation conditions in the area are improved.

For them and the Trakilovic family, the new roadway and the two bridges just off the main road should make the return more possible.