Bridge joining Bahrain base and port hailed as timesaver 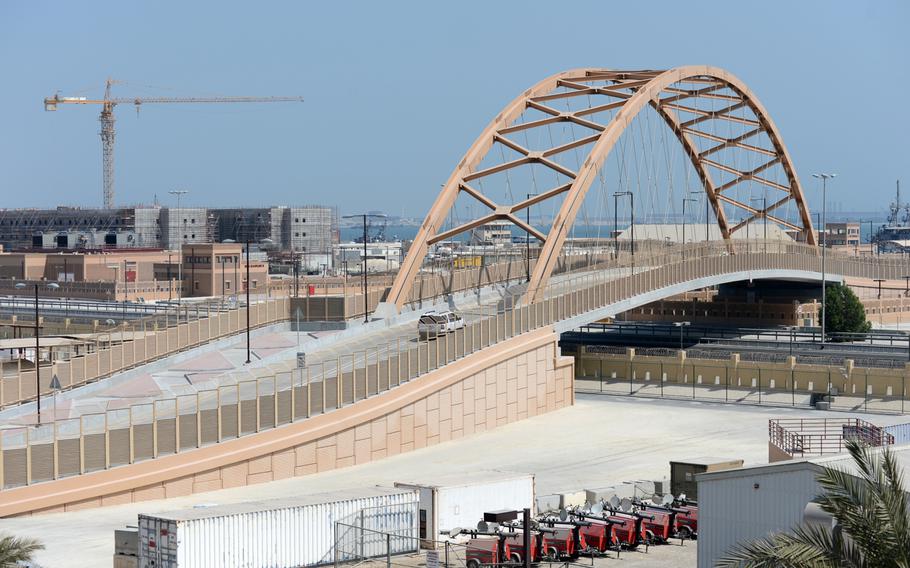 The new bridge connecting the main base of the Naval Support Activity in Bahrain to its port facility is now open and is being hailed as a big improvement for personnel. (Steven Smith/ U.S. Navy)

MANAMA, Bahrain — A much-anticipated bridge connecting the main base of the Naval Support Activity here to its port facility across a major roadway opened earlier this month.

There was little fanfare for the opening of the $8 million, 400-foot-long tied-arch suspension bridge; however, it’s being hailed as a vital piece of infrastructure for the base.

Sailors said they had been counting the days until the bridge opened.

“It makes for easy access to base facilities for daily use,” said Chief Petty Officer Shawn Flynn, who works on the port side of the base known as NSA-2. He and another sailor used the bridge at lunch time Thursday to take care of errands on the main base, which has many of the support facilities such as medical, administration and the Navy Exchange.

“It is absolutely a quality-of-life improvement that the sailors have been wanting,” said Capt. David Meron, base commander. He said it also improves safety and security by taking buses, vehicles and bicycles off Bahrain’s busy roads.

The opening of the bridge was expected last month but was delayed without explanation. U.S. officials never publicly explained the delay but indicated it was over a customs issue which was later resolved.

The bridge reduces the travel time between both facilities from about 30 minutes to five minutes. Before the bridge opened, personnel had to go off base and travel through the city to reach the other facility.

Personnel are allowed to walk, bike and use golf carts and authorized government vehicles to cross the bridge.

Officials said the bridge will allow the base to reduce its vehicle fleet by 10 percent, which will save more than $500,000 annually. And the cancellation of the shuttle bus contract between both facilities will result in an additional $130,000 in savings per year.

Meron called the bridge “a huge step forward.” It connects the main base not only to U.S. 5th Fleet’s minesweepers and coastal patrol ships along the waterfront, but also to 77 acres of leased land, where the Navy has several projects under construction. These include barracks to house more than 500 sailors that is slated to open next year.