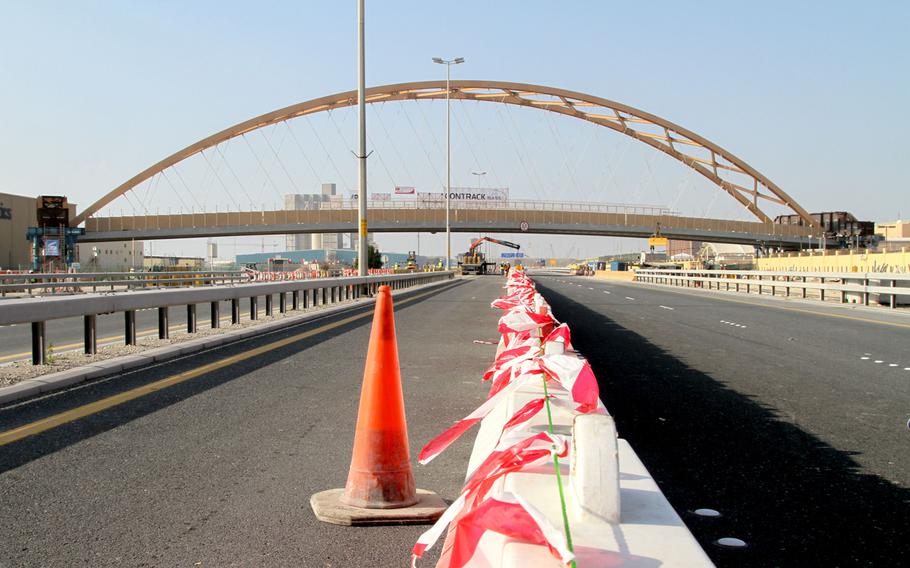 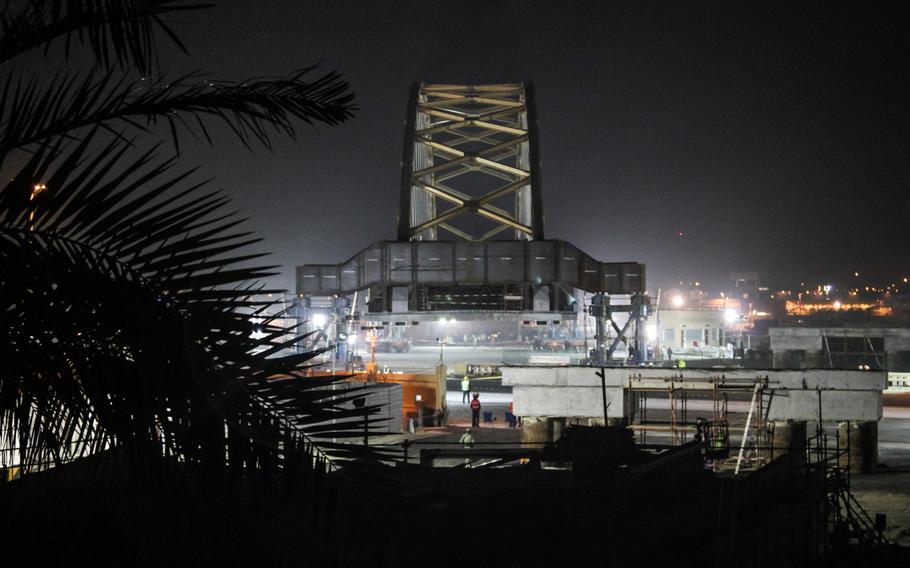 A 400-foot-long tied-arch suspension bridge is moved in the early morning hours of Friday, Jan. 31, 2014, toward its permanent location. (Hendrick Simoes/Stars and Stripes)

MANAMA, Bahrain — A tied-arch suspension bridge to connect Naval Support Activity Bahrain to expansion land along the waterfront was installed Friday after it was moved overnight roughly 260 yards from the site where it was built.

The 2,860-ton bridge will provide easy access between the main base, and 77 acres of leased land — known as NSA-2 — the U.S. Navy is developing across one of Bahrain’s busiest roadways. Without the bridge, access to NSA-2 from the main base involves a 20- to 30-minute drive through the city. Navy officials claim the $8 million bridge will result in a 10 percent reduction in the Navy’s vehicle fleet in Bahrain, saving more than $500,000 annually, and will also make it possible for emergency vehicles, pedestrians and electric carts to quickly move between facilities.

Naval Support Activity Bahrain, home to the U.S. 5th Fleet, has about 7,000 U.S. personnel and is growing. The bridge is considered an important milestone in the growth of the base, which now occupies 137 acres. A vehicle maintenance facility, warehouse, dining facility and barracks to house about 1,000 sailors are under construction on NSA-2, which officials say will be more of a planned complex. The Navy plans to bring two more coastal patrol ships to Bahrain in the spring, and has a long-term plan to port littoral combat ships here.

It was a first for many to see: an approximately 400-foot-long bridge essentially driven to its final destination, instead of being built in its intended spot, as bridges usually are.

“Never in my life have I seen anything like this,” said Alamgir Hossain, a Bahrain resident who came out at midnight to watch the bridge move.

The project was initiated in August 2012; Army Corps of Engineers officials say this kind of bridge project is the first of its kind in the Middle East District’s history.

Officials say if they had opted to construct the bridge on location, it could have affected Bahrain’s economy by disrupting traffic on one of the busiest roadways in the country for months.

“We want to have a minimal impact on Bahrain and businesses,” said Jennifer Stride, Naval Support Activity Bahrain spokeswoman. By building the bridge in open space of land alongside the road and moving it into place using self-propelled modular trailers, traffic was disrupted for one night only.

However, the move did not go as smoothly as engineers had expected. It was plagued by a series of issues causing substantial delays that threatened to break a limited seven-hour window when officials could shut down the roadway — a major corridor on the island nation that many consider Bahrain’s version of the Washington, D.C., Beltway.

“We had a number of mechanical breakdowns that we basically had to work around,” said Mark Wittrock, U.S. Army Corps of Engineers project leader. As workers raced against the clock to install the bridge and reopen the road by 6 a.m., Bahrain’s Ministry of Works gave the U.S. Navy additional time to complete the move — which it did by midmorning Friday.

“It was a long time coming and I’m glad to see it,” commented Wittrock as the bridge neared its final destination.

The bridge is scheduled to open in August.