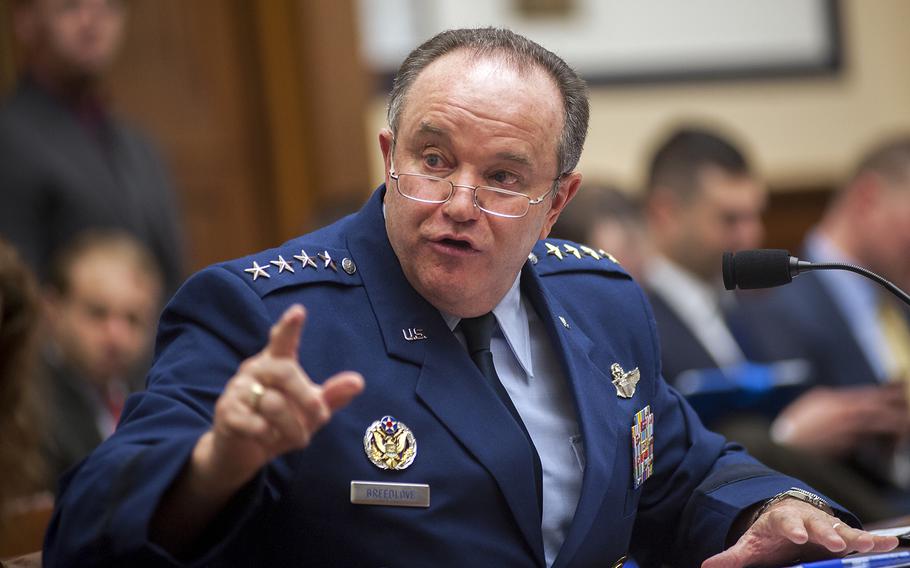 Buy Photo
Gen. Philip Breedlove, commander of the Supreme Allied Command Europe and the U.S. Europe Command, points to a map of Europe as he testifies before the House Armed Services Committee on Capitol Hill in Washington, D.C., on Thursday, Feb. 25, 2016. (Carlos Bongioanni/Stars and Stripes)

Buy Photo
Gen. Philip Breedlove, commander of the Supreme Allied Command Europe and the U.S. Europe Command, points to a map of Europe as he testifies before the House Armed Services Committee on Capitol Hill in Washington, D.C., on Thursday, Feb. 25, 2016. (Carlos Bongioanni/Stars and Stripes) Buy Photo
A map of Europe is on display as Gen. Philip Breedlove, commander of the Supreme Allied Command Europe and the U.S. Europe Command, testifies before the House Armed Services Committee on Capitol Hill in Washington, D.C., on Thursday, Feb. 25, 2016. (Carlos Bongioanni/Stars and Stripes) Buy Photo
Congressman Mac Thornberry, R-Texas, the chairman of the House Armed Services Committee listens to testimony during a hearing on Capitol Hill in Washington, D.C., on Thursday, Feb. 25, 2016. (Carlos Bongioanni/Stars and Stripes)

The U.S. military must rebuild in Europe to face a more aggressive Russia, whose advanced submarines, weapons systems and geographic advantage have the U.S. “playing zone defense,” the top U.S. commander in Europe said Thursday.

“We have about 20 years of a different paradigm to correct,” Gen. Philip Breedlove, commander of U.S. European Command, said during testimony before the House Armed Services Committee.

Breedlove, who has led EUCOM during the command’s biggest transformation in a generation, said he did not foresee a need to return to a Cold War-style military posture. But the era of trying to make a partner of Russia is over, and key U.S. capability gaps need to be addressed, he said.

“Russia has chosen to be an adversary and poses a long-term existential threat to the United States,” Breedlove said.

“This is not the Cold War, but I do believe we are not where we need to be now in a mixture of permanently forward-stationed forces and pre-positioned stocks so that we can rapidly fall in on it,” Breedlove said.

A Pentagon plan to spend $3.4 billion on the European Reassurance Initiative to boost the number of rotational troops from the U.S. and military equipment positioned in Europe must continue in the years ahead, he said.

While rotational forces are a “second best” to permanent forces, the Pentagon’s plan to add an additional rotational Army brigade — focused on “war fighting” readiness rather than training — is a step forward, he said.

Rep. Mac Thornberry, R-Texas, chairman of the House Armed Services Committee, questioned whether the Pentagon’s European Reassurance Initiative, which is paid for through contingency funds rather than the main Pentagon budget, sends a sufficient signal of U.S. military commitment to Moscow.

“That can hardly leave the Russians quaking in their boots,” Thornberry said.

Since Russia’s 2014 intervention in Ukraine, EUCOM has focused on bolstering its forces along NATO’s eastern flank to reassure eastern European allies wary about Russia’s future intentions. Still, EUCOM has struggled to anticipate Russia’s moves in the region, where large-scale Russian war games have caught allies off guard.

With the Cold War’s end and the rise of challenges in the Middle East, key intelligence and surveillance capabilities have shifted to other regions. But in an area where Russia has the advantage of geography and force numbers, EUCOM will need better intelligence to head off a crisis, Breedlove said.

“It is really important we re-establish our ability to see and interpret so that we can deploy early,” said the general, who will retire in the coming months after nearly 40 years of military service.

Some allies are particularly concerned about NATO’s ability to defend countries in the Baltics, where Russian forces far outnumber those of the allies. A recent war game conducted by the Rand Corporation said Russia could overrun most of the Baltic states in about 60 hours.

Moscow has denied any intent to invade any part of NATO territory, but Russia’s aggressive moves in Ukraine and Syria have fueled anxiety in a region long fearful of Russian domination.

NATO is now reviewing a plan to increase its presence along the eastern flank with a new multinational unit. But to deal with Russia in a military confrontation, allies would need to be able to break through Kaliningrad, a Russian enclave nestled between Poland and Lithuania on the Baltic Sea — what Breedlove described as a “fortress” filled with weapons systems that can target allies from land, sea and air.

“We need to make sure we have the capacity to … break it so that we can continue to rapidly reinforce,” Breedlove said.

Another area of concern is Russia’s increased underwater activity around the so-called Giuk gap, an area around Greenland, Iceland and the United Kingdom, where Russian submarines have been a more common presence. Breedlove had sought more naval assets, but those remain in short supply, he said.

“In that very contested, very highly sophisticated part of the world, we play zone defense,” Breedlove said. “We cannot play man on man.”

Meanwhile, Breedlove blasted Russia’s military campaign in Syria, which he said has focused on bolstering the regime of Moscow ally Bashar Assad rather than targeting Islamic State group fighters.

In the process, Russia has “weaponized” the migrant crisis, bombing rebel strongholds as part of a plan to send civilians fleeing to Europe, which is facing its worst refugee crisis since World War II.

The effort is designed to “terrorize the public and get them on the road,” Breedlove said.