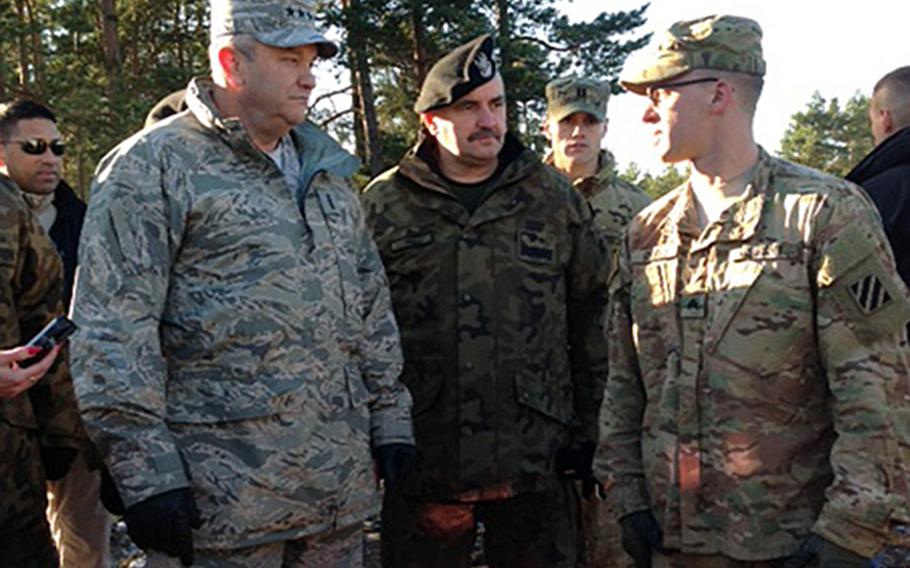 U.S. European Command's Gen. Philip Breedlove stands atop an Abrams tank to meet with U.S. soldiers taking part in training at the Zagan Training Area in Poland on Tuesday, Nov. 24, 2015. Breedlove is meeting with troops from the Georgia-based 3rd Infantry Division, who are serving as a rotational force across the region, including all three Baltic states, in a Thanksgiving season visit. (John Vandiver/Stars and Stripes) 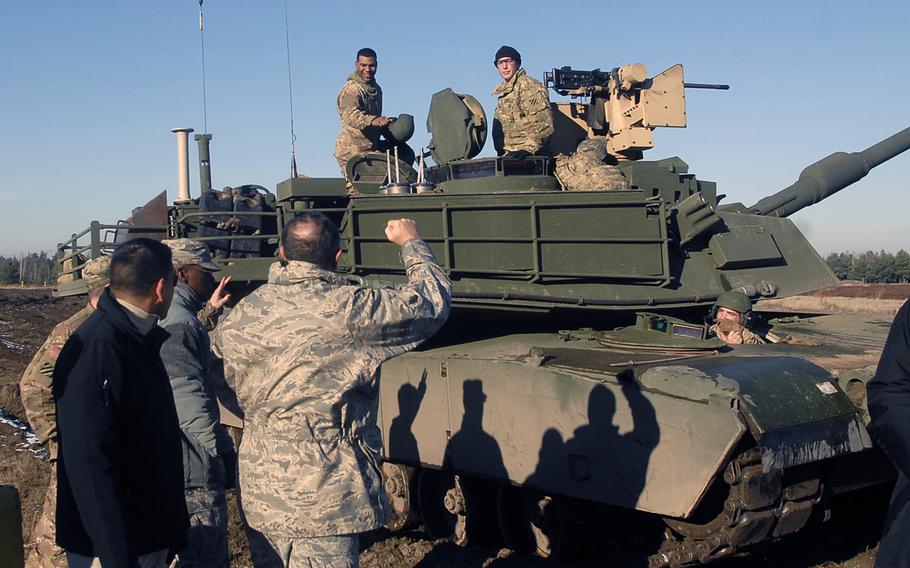 Gen. Philip Breedlove, the top U.S. officer in Europe, raises a fist after riding aboard an Abrams tank for a live-fire drill at the Zagan Training Area in Poland on Tuesday, Nov. 24, 2015. Breedlove was visiting troops form the 3rd Infantry Division, who have been serving as a rotational force in Poland and the Baltics. (John Vandiver/Stars and Stripes) 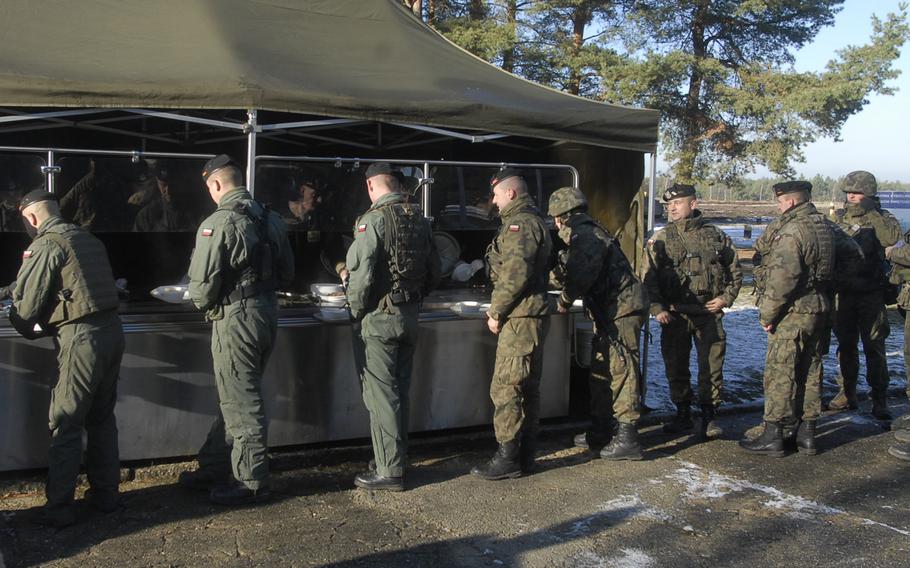 Polish troops line up for chow after a live fire drill at Zagan Training Area in Poland on Tuesday, Nov. 24, 2015. Polish soldiers have been working side-by-side with 3rd Infantry Division soldiers since September as part of a U.S. effort to train with and reassure allies in eastern Europe and the Balitcs. (John Vandiver/Stars and Stripes)

ZAGAN TRAINING AREA, Poland — Sitting down for lunch under a tent with a group of American infantrymen at this sprawling Polish base, Gen. Philip Breedlove apologized for being late; he had just learned that NATO ally Turkey had shot down a Russian SU-24 jet.

“My phone has been going all day long,” Breedlove told the soldiers as they ate a lunch of Polish soup and stewed beets.

Breedlove — also the head of U.S. European Command — was in Poland as part of a three-day trip that will also take him to the Baltics, where he will visit American soldiers, leading up to the Thanksgiving holiday.

The U.S. troops scattered around the region have been at the forefront of a U.S. effort to reassure allies uneasy over Russian aggression in Ukraine.

But as Breedlove flew east from his headquarters in Belgium, fresh tensions along the Turkish border with Syria were a reminder of the security problems the U.S. now faces to the south, where the Islamic State operates on NATO’s doorstep and Russia’s presence has grown.

Events were only beginning to unfold as the general’s plane touched down Tuesday in Poland. But the incident prompted an emergency NATO meeting in Brussels late Tuesday.

Breedlove, who said Turkey has a right to defend its territory, urged calm as the facts over what transpired undergo review.

"We will know a lot more In the next couple days," Breedlove said. "I think all parties have a desire and a stake in taking a calm approach to what just happened."

For nearly two years, the U.S.-led NATO alliance has focused on its eastern flank in the wake of Russia’s intervention in Crimea, a strategic wake-up call that has resulted in an enhanced NATO presence across Poland and the Baltics. At the same time, NATO’s southern flank is more vulnerable now than at any other time in recent years with the rise of the Islamic State along Turkey’s southern borders and threats in Africa just across the Mediterranean from Italy and Greece.

NATO is increasing looking south as it develops new strategies for contending with the unrest in the region, which has led to thousands of migrants flooding into Europe.

“This is a two-headed issue that we will deal with,” Breedlove said earlier Tuesday. “The problem in the south is more about ungoverned spaces, unresponsive governments creating massive flow of migrants and a large battlefield just south of one of our great allies, Turkey.”

A key issue will be getting more partners in involved in the U.S.-led collation fight against the Islamic State, said Breedlove, who is leading a recruitment effort among allies in Europe.

Despite more than a year of air strikes, militants remain firmly entrenched in Syria and Iraq, prompting widespread criticism about the U.S.-led effort. Breedlove, however, said there are signs that the campaign is cutting into the Islamic State gains.

“We’re having some success in creating some broader pressure on Daesh,” said Breedlove, using an Arabic acronym for the Islamic State group. “And so that is the goal, to continue to bring pressure on multiple axes on them. Other nations in Europe will be important to that effort.”

As the Nov. 13 terrorist attacks in Paris have focused the attention of allies on the south, it also has raised the prospect of Russia as a potential partner in the years-long conflict in Syria. France has called for a U.S., French and Russian partnership in the battle, something the Obama administration says is unlikely given Moscow’s backing of the Assad regime in Syria. French President Francois Hollande was engaged in shuttle diplomacy, meeting with President Barack Obama in Washington Tuesday, while planning to meet Wednesday with Russian President Vladimir Putin in Moscow.

Some experts say Putin’s moves in Syria could signal an attempt to divert attention from Russia’s role in Ukraine, which has resulted in hard-hitting financial sanctions and largely isolated Russia from the West.

However, Turkey’s downing of the Russian warplane is a “serious escalation” that could affect the U.S.-led effort to combat Islamic State militants inside Syria, said Shashank Joshi, a senior research fellow at the Royal United Services Institute.

“It’s the first time I can recall in decades, a NATO member downing a Russian aircraft,” he said.

While it’s unlikely that Russia would retaliate directly against Turkey, Joshi said it’s possible Russia might strike back against Turkish-backed rebels in northern Syria, in the same area where the Russian jet crashed Tuesday.

“That would be a blow,” Joshi said, “I think that entire effort to try and redirect Russia’s effort could take a bit of a knock now.”

Recently, Russia appeared to be pushing for a larger role on the world stage with its entry into Syria’s war, launching air strikes against anti-Assad forces.

With the recent downing of a commercial Russian airliner, an attack blamed on the Islamic State, Russia appears more motivated to take action against the militants, Breedlove said.

“They want to be seen as an equal,” Breedlove said. “They want to come alongside as a partner in a lot of efforts in many different places.”

Over the long term, the West will have to find a way forward with Moscow, “to find some sort of relationship with Russia if we want to get to the goals we have in Europe,” Breedlove said.

But as he met with U.S. and Polish troops Tuesday, the focus remained on strengthening NATO’s eastern flank as U.S. Bradley fighting vehicles and Abrams tanks fired shells in the distance.

“It’s a very important mission that you’re doing,” Breedlove told troops from the U.S.-based 3rd Infantry Division after the live-fire demonstration. “For them and for us.”