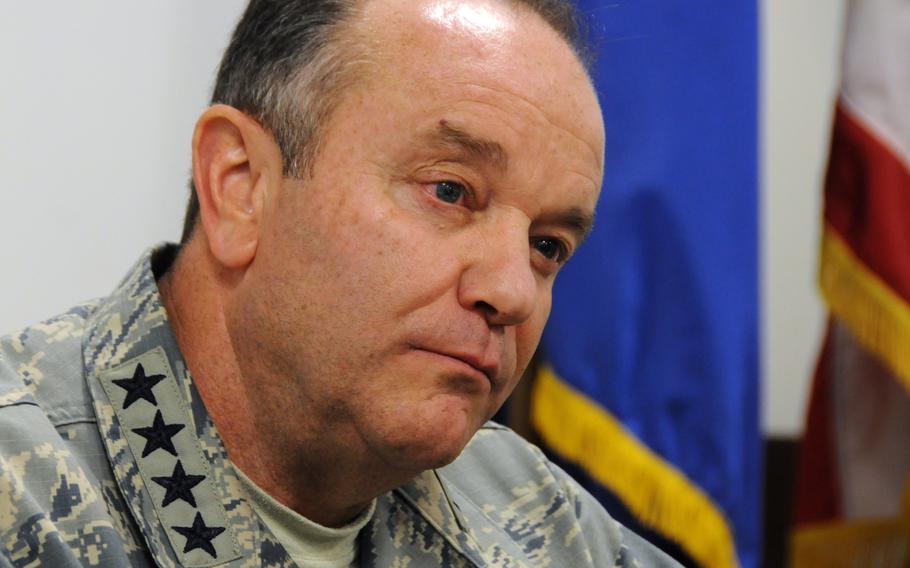 GARMISCH-PARTENKIRCHEN, Germany — It might not alter the course of Syria’s civil war, but taking chemical weapons off the battlefield is a start, said NATO Supreme Allied Commander Gen. Philip Breedlove, who cautioned there remain as many questions as answers on Syria’s offer to give up its chemical weapons.

“Clearly, if done correctly, and we are able to account for the control and removal of all the chemical weapons, that has to help the situation,” Breedlove said during an interview on Wednesday. “There are a lot of details that would have to be addressed along the way to that.”

Breedlove, who was in the Alpine town of Garmisch-Partenkirchen for meetings with senior military leaders from nearly 50 countries, said Syria has been a source of concern during the conference at the George C. Marshall European Center for Security Studies. “I think there is a good consensus that we all understand chemical weapons were used and they were used by the Assad regime on his own people,” Breedlove said.

Critics say the United States and its allies have yet to provide concrete evidence that government forces carried out the Aug. 21 attack in which chemical weapons were allegedly used. Russia has said that if such proof exists it should be submitted to the U.N. Security Council.

Organizations such as NATO and political leaders around the world are looking at the latest proposal — Moscow’s initiative to have Damascus surrender its chemical weapons to international control and Syria’s stated intent to do so — and pondering the possibilities, Breedlove said.

While the U.S. and others examine the proposal, President Barack Obama has said the U.S. military remains on stand-by should punitive strikes against the regime of Bashar Assad be required. Still, if Damascus backs up its talk, it could take off the table a key security concern for the West: that chemical weapons will fall into the hands of groups affiliated with al-Qaida should the country implode.

“Of course, any possible solution needs serious consideration,” Breedlove said, adding that the hard part is working out the details to ensure those weapons are accounted for.

Meanwhile, Breedlove, who also heads U.S. European Command, is contending with pressing security challenges of the day at a time when budgets of U.S. and allied militaries are getting slashed.

In the case of the U.S. military, its combatant commands, including EUCOM and Africa Command, are now under the microscope as the Pentagon looks for efficiencies. A range of options are being looked at, including merging some commands as part of a streamlining effort. Breedlove, while stopping short of offering examples of specific reforms under consideration, acknowledged the Pentagon is taking a hard look at how commands are organized.

“We need to look at these headquarter structures and how they should be appropriately sized or changed to react to that shrinking of the overall force,” Breedlove said. “I embrace the discussion completely. Change is a constant in our military, and if you can’t embrace change, you’re going to have a tough time.”

Sweeping reforms, including potential mergers of commands, are among the options being examined, Breedlove confirmed.

“I am confident our nation will come to the right decision,” said Breedlove, who added he couldn’t forecast the outcome of the review. “Some change is on the way.”

For Breedlove, the main focus at Garmisch has been consulting with his military counterparts from 48 nations. There also has been a special focus on bolstering the quality of non-commissioned officer corps among allied militaries. An empowered NCO corps is the linchpin to any successful military, he said.

“When we push that leadership down, push that initiative down, we only stand to get better,” Breedlove said.

At the same time, Breedlove said, he remains focused on Afghanistan, where planning for a post-2014 noncombat training mission continues. Overall, Afghan troops have been fighting well since assuming the lead on the battlefield, according to Breedlove, who said he hopes troop commitments from the U.S. and its allies come “sooner rather than later.”

“Clearly, if we can nail this down, it’ll take some of the ambiguity off the table,” Breedlove said. “I’m a big fan of as soon as possible.”