Breedlove: NATO must be prepared to confront 'tyranny' 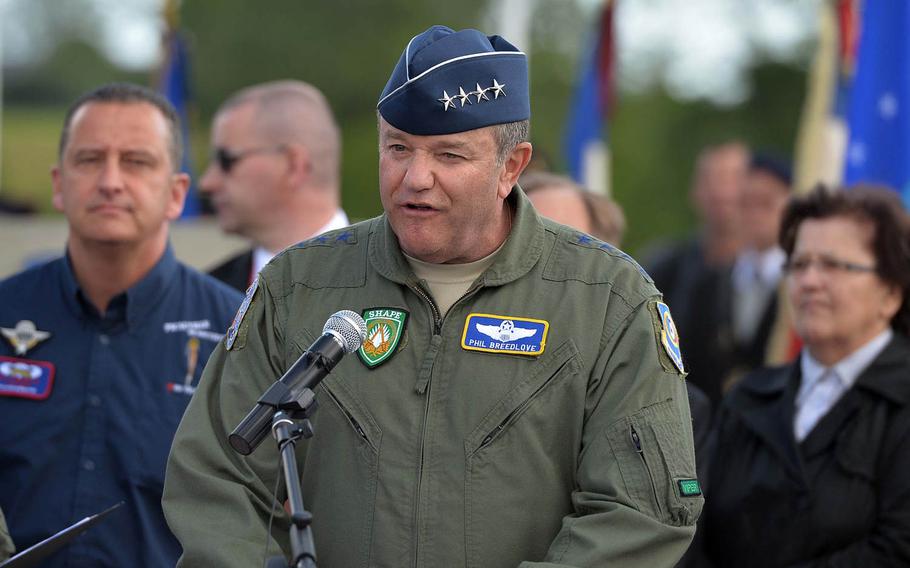 CARENTAN, France — As tens of thousands of people, including World War II veterans and active-duty troops, crowd into Normandy to commemorate the 70th anniversary of D-Day, NATO’s top officer cautioned that the U.S. and allies must remain prepared to confront tyranny in Europe in the present day.

“Think about the investment in human life. Think about what went on here at D-Day to address tyranny and to bring peace to Europe,” Gen. Philip Breedlove, NATO’s supreme allied commander, said in an interview Thursday in Carentan, which was seized by U.S. forces after nearly a week of heavy fighting in June 1944. “We are enjoying relative peace in Europe now, and we need to guard it cautiously and carefully.”

After Russia’s annexation of Crimea from Ukraine, “the lesson I think is that we thought that kind of behavior was over, and it’s not, and so we need to remain prepared so that we don’t have to undertake another operation like the one that started here on D-Day at some time in the future,” Breedlove said.

President Barack Obama announced on Tuesday that he was seeking $1 billion to boost the U.S. military presence in eastern Europe to reassure allies on NATO’s eastern periphery.

The British on Wednesday announced they would send as many as 1,000 troops and 25 tanks to NATO war games near the Ukraine border later this year.

Breedlove said that other nations also committed forces to the effort to reassure allies in closest proximity to Russia and Ukraine at a NATO ministerial meeting that ended Wednesday. He said he would leave it up to the countries themselves to make the announcements.

“Just suffice to say that some of our larger more capable nations will be participating in battlegroup-size formations,” he said.

Breedlove attended a ceremony in Carentan on Wednesday in commemoration of the bloody, six-day battle American soldiers fought to wrest the town from the Germans days after D-Day.

On Thursday, Breedlove was in Picauville to pay tribute to the Army Air Corps, which was responsible for flying the planes that dropped more than 13,000 American paratroops behind Normandy’s beaches hours before the massive amphibious assault on June 6, 1944.

On Friday he’ll take part in commemorations at Normandy American Cemetery, where 9,386 headstones mark the graves of American servicemen who died in the invasion.

Breedlove said he has no plans to mention the parallels between Germany’s actions in World War II and the current events on the Continent.

“Frankly, this D-Day time is about celebrating the human sacrifice, the incredible courage, the honor of what our troops did in the past,” he said.

Russian President Vladimir Putin is scheduled to attend some of the events surrounding those celebrations. Breedlove said he has no plans to meet with Putin.

“If the opportunity presents itself, I’ll put my hand out and shake.”