Breedlove: EUCOM must get back to war planning 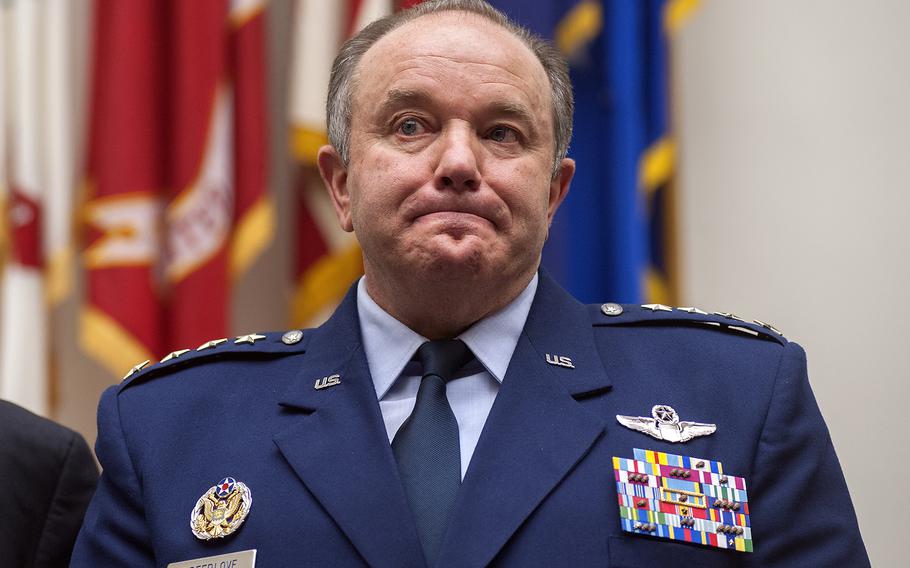 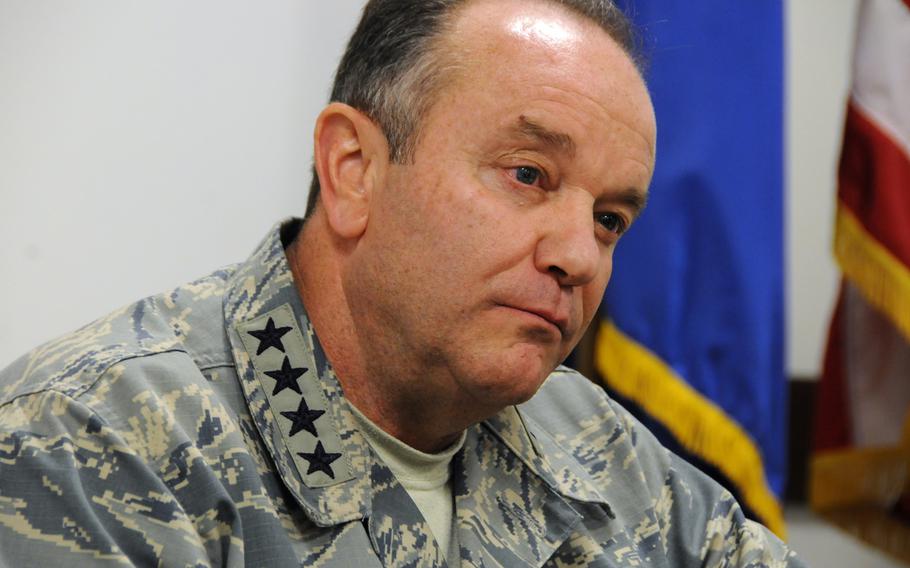 U.S. Air Force Gen. Philip Breedlove, commander, U.S. European Command and NATO Supreme Allied Commander Europe, during an interview with Stars and Stripes in Naples, Italy, May 30, 2013, not long after taking over the commands. (Stars and Stripes) 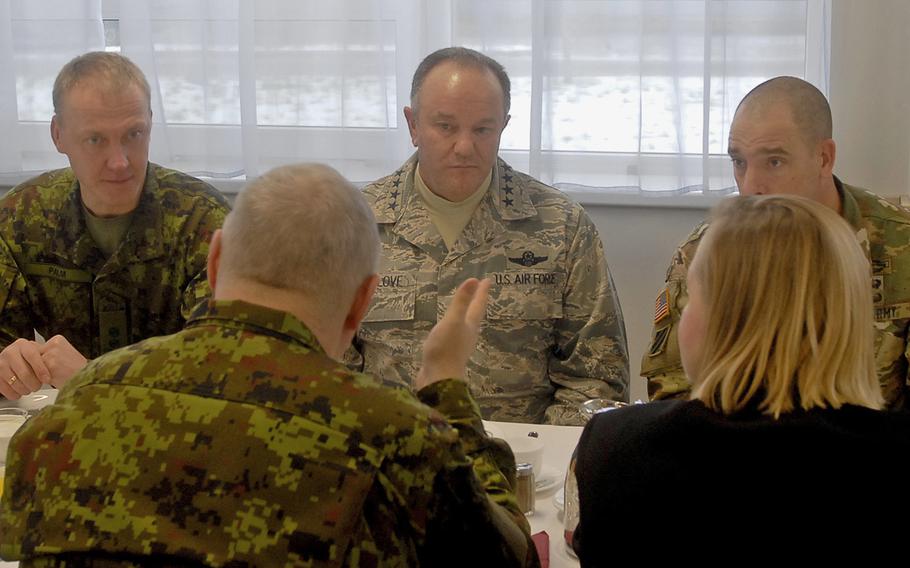 Gen. Philip Breedlove, the top U.S. officer in Europe, talks on Wednesday, Nov. 25, 2015, with Estonian military leaders and U.S. troops, who are in the country on a mission aimed at reassuring allies in the Baltics. The effort is part of a campaign to train allies and send a deterrent signal to Russia, whose aggressive moves in Ukraine have unnerved NATO allies in the east. (John Vandiver/Stars and Stripes) 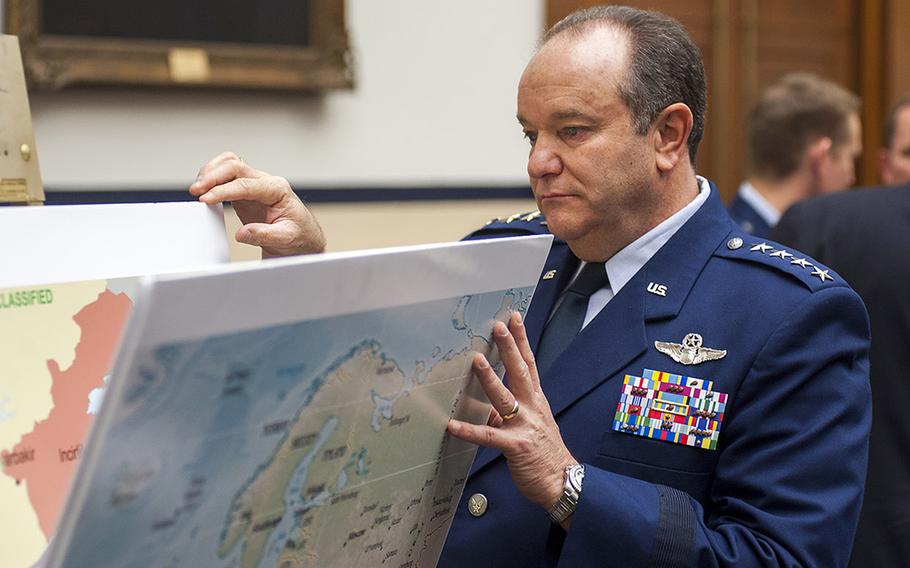 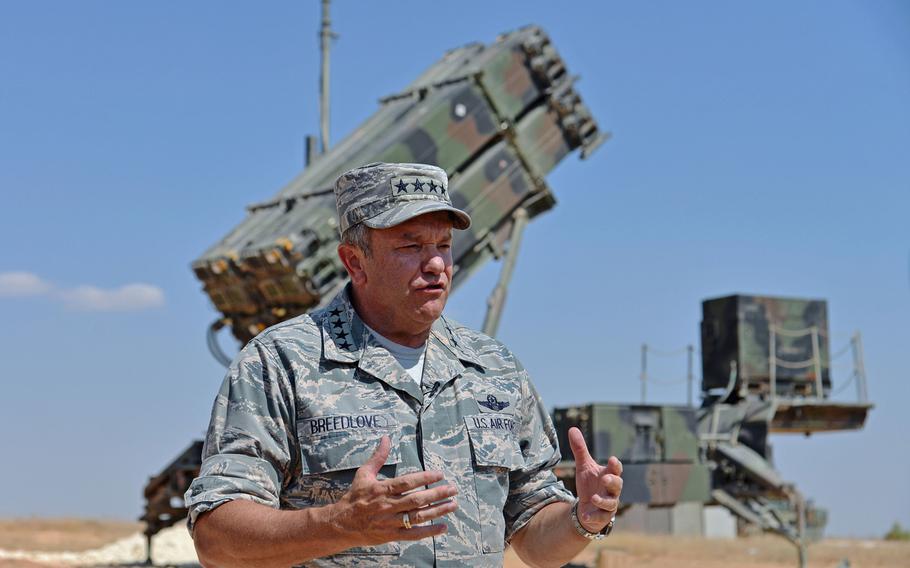 STUTTGART, Germany — U.S. European Command’s Gen. Philip Breedlove says the military here needs to get back to the business of war planning, a skill lost during the post-Cold War era and one needed again in the face of a resurgent Russia.

“I am very sure about how EUCOM needs to change,” Breedlove said during a recent exit interview with Stars and Stripes. “This headquarters shrank and changed from a war-fighting headquarters to a building-partnership-capacity, engagement kind of headquarters.”

On Tuesday, Breedlove will walk a final time across the parade ground at EUCOM headquarters, handing off leadership of more than 60,000 troops to Gen. Curtis M. Scaparrotti.

Unlike when Breedlove assumed command in 2013, Scaparrotti arrives at a time of upheaval as the continent contends with Cold War-like tensions with Russia, a refugee crisis tearing at Europe’s social fabric, and increased fears about terrorism because of war along NATO’s southern flank.

Scaparrotti will lead a EUCOM headquarters that over the years has shrunk in size — it is the second-smallest of all combatant commands — even as the Pentagon attempts to boost its presence along NATO’s eastern edge.

Breedlove said more work needs to be done to lift EUCOM out of its post-Cold War mindset, which resulted in “building partner capacity,” military parlance for training missions. EUCOM is a “mere fraction” of what it was a generation ago, a downsizing that occurred when the U.S. was trying to make a partner out of Russia.

“We changed EUCOM based on that paradigm,” Breedlove said.

Breedlove, who also serves as NATO’s supreme allied commander, stopped short of spelling out how the headquarters needs to be rebuilt. “We don’t talk about our plans, but I think you know military men and women have to be ready. That is what we have to do,” he said.

A glaring capability gap for EUCOM, and an area where the command could look to beef up, involves command and control in a crisis, said John R. Deni, a professor at the U.S. Army War College in Carlisle, Pa.

“There is nothing between the fighting units and a three- or four-star command,” he said.“ At a minimum, you need a division headquarters to wield all the various pieces.”

U.S. Army Europe has tried to fill that command-and-control hole with a 100-person mission command element on loan from the 4th Infantry Division, which overseas day-to-day Army operations in the Baltics. But that element is too small to manage a real-time crisis or to lead a joint response across the services, Deni said.

“There needs to be more command and control on the ground, not something you flow in in the event of a crisis,” Deni said. “It (the headquarters) would have to have the ability become a joint task force at EUCOM’s order.”

In the past three years, EUCOM has responded to new security concerns by boosting its presence in eastern Europe, mainly through rotational troops and pre-positioned tanks and other armor.

A $3.4 billion Pentagon proposal, prompted by what the West sees as a more aggressive and unpredictable Russia, seeks to build upon recent efforts in the year ahead.

Dealing with Russia’s formidable capabilities around the Baltics, where NATO is outmanned and outgunned, is one obstacle allies will need to prepare for better, according to Breedlove. That includes being able to break through Kaliningrad, a Russian enclave between Poland and Lithuania on the Baltic Sea that Breedlove has described as a fortress filled with weaponry. From there, Moscow can target allies from the ground, the sea and the air, potentially denying allies access in a crisis.

Russia sees U.S. and NATO moves in the east as a provocation and has threatened countermeasures. Tensions in the Baltics have intensified steadily, as seen when Russian fighters recently buzzed a U.S. warship traveling in international water.

Some critics, particularly in Berlin, have said Breedlove’s rhetoric sometimes has been too hawkish.

The general rejects such criticism, saying his objective is to send a signal of deterrence to Russia.

“We have to be ready for a situation where we don’t have Russia as a partner,” he said.

Early signs from Scaparrotti, who arrives in Europe after nearly three years leading troops in South Korea, indicate he’ll adopt a similarly tough posture toward Russia. When asked during an April 21 Senate confirmation hearing whether Russia’s maneuvers against U.S. ships and aircraft in the Baltics demanded a U.S. military response, he left the door open.

“I would just say that as we look at what options [we have], we should keep everything on the table,” Scaparrotti said.

Regarding the bolstering of forces in Europe, Scaparrotti seems to be on the same wavelength as Breedlove, who has called for more permanent forces in addition to rotational troops.

During testimony before the Senate, he said he would favor a third permanent brigade in Europe. Breedlove also has advocated more permanent forces but expressed skepticism about whether there are sufficient resources to permanently station large armored units in Europe again.

NATO also has adapted during Breedlove’s tenure, expanding its crisis-response force and streamlining procedures for the contingency deployment of troops. The next step, in his view, is for allies to strengthen capabilities across the board rather than just providing rapid-reaction elements.

As Breedlove prepares for retirement, one in which he says he plans to withdraw from public life to focus on being a grandfather, his parting advice for NATO is not to lose its sense of urgency.

“The most important thing I worry about is follow-through, keeping up the momentum,” he said.