Breaking into the underwater boys’ club: Sailor one of 12 women to be submarine-qualified 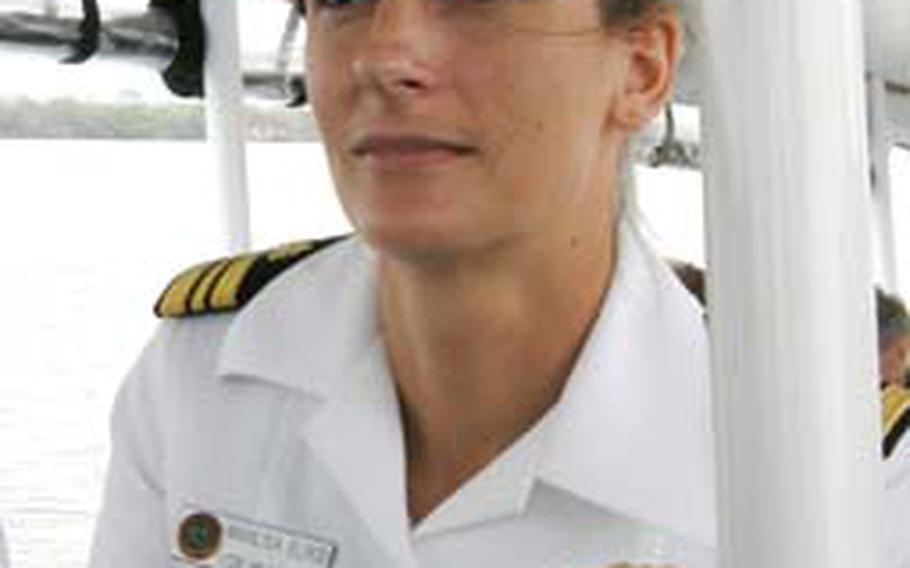 Lt. Cmdr. Marilisa Elrod, shown here in Hawaii recently, has a rare distinction: as a doctor and undersea medical officer, she has become submarine qualified in a service that excludes women as crewmembers. Elrod says it would take effort and changes but believes women can successfully serve on submarines. (Courtesy of Marilisa Elrod)

YOKOSUKA NAVAL BASE, Japan &#8212; A sailor once asked Lt. Cmdr. Marilisa Elrod where she got the twin dolphins sewn below the U.S. Navy lettering on her uniform. She could understand the sailor&#8217;s confusion &#8212; he had probably never seen the insignia on a woman before.

"I said I borrowed them from my husband ... just to tease him," said Elrod, a doctor and undersea medical officer based in Hawaii.

Then she explained how she studied for more than a year and passed her qualification test aboard the USS Key West before earning the distinction of being a submarine-qualified sailor.

To a submariner, those dolphins mean that the sailor wearing them knows enough about every function of the boat to save it in an emergency.

Elrod is one of 12 submarine-qualified women in the Navy, officials said.

As a medical officer, she has had the opportunity to ride on several vessels. However, crews stationed aboard submarines remain all male in the U.S. Navy.

"I think in the beginning it would be difficult from a logistics standpoint, but I don&#8217;t see any reason why women would not be well-suited to be on subs," Elrod said.

Australia, Canada, Spain and Norway all allow women to serve on submarines, though their deployments tend to be shorter than those aboard U.S. nuclear-powered subs.

Some U.S. sailors say having women serve aboard subs would hurt unit cohesion. Others say sailors would adapt.

"You&#8217;ll hear all sorts of arguments against it, some medical ... some similar to the arguments you hear against having homosexuals serving in small units," said Petty Officer 1st Class Jim Grisham, an electronics technician serving aboard the USS Seawolf. "Nothing credible, in my opinion, and little that the surface Navy and the other armed forces haven&#8217;t learned to deal with."

Female U.S. Naval Academy students have come aboard the Seawolf and other submarines for years as part of their summer training.

While aboard submarines, Elrod has shared an officer&#8217;s stateroom.

Studies on retrofitting existing submarines to accommodate female berthing have shown that doing so would be prohibitively expensive, Kuntz said.

Submarines are already packed tightly with equipment; the few spaces that aren&#8217;t, like the chief petty officer&#8217;s lounge, aren&#8217;t likely to be given away to enlisted sailors of any gender, Kuntz said.

Nonetheless, some sailors think it could be done if women are willing to put up with the same near-absence of privacy as men. For example, an extra curtain could cordon off a women&#8217;s bunk area in the existing berths.

In Elrod&#8217;s case, a sign hung on the door of the head, or bathroom, when she was using it. Certain times could be designated as women only, as they are for shower trailers in Iraq and Afghanistan.

Undiagnosed pregnancies before deployment could interrupt missions, detractors say. However, there are protocols for evacuating sailors with medical emergencies.

Submarine medics would also need to keep women&#8217;s health issues in mind; for example, abdominal pain can be harder to diagnose in women, Elrod said.

Other than the logistics, the biggest change would have to occur among attitudes. A large group of men in their 20s and 30s, living in very close quarters, tend to produce a lot of off-color humor.

"There&#8217;s a sort of fraternity culture on board that would have to evolve, but if destroyers and the space station can be sex-integrated, then so can submarines," Grisham said.

Kuntz, who is submarine qualified, said that successful submariners of any gender tend to be shaped by the existing culture more than they change it themselves.

Petty Officer 2nd Class Seth Powers, 29, said that even most sailors who think it&#8217;s a bad idea wouldn&#8217;t have much choice but to do their jobs.