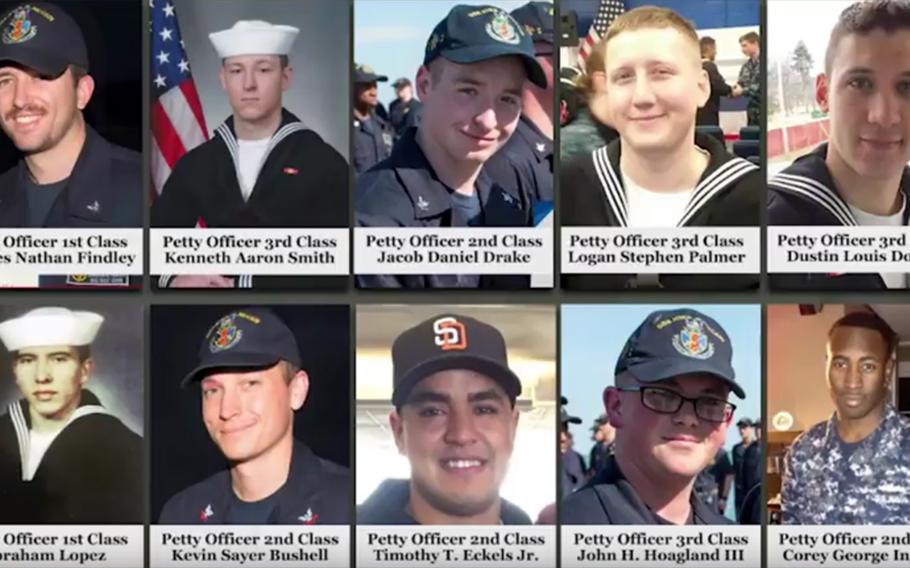 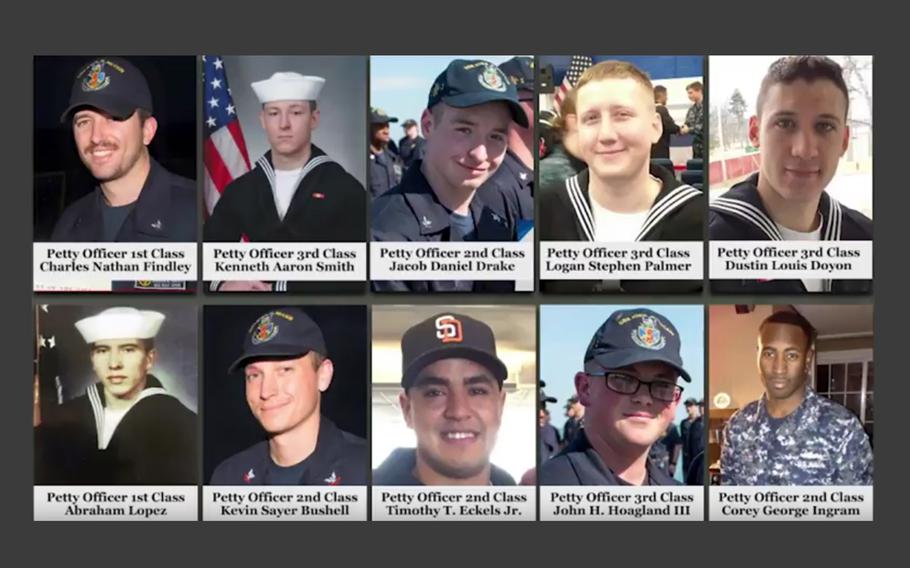 The sailors who were killed in the USS John S. McCain collision were remembered at a ceremony on Aug. 21, 2018. () 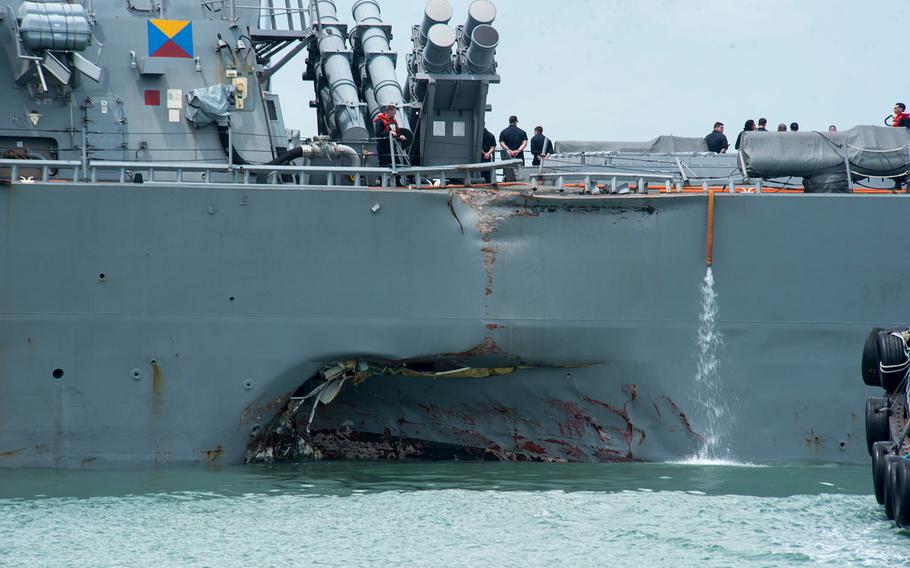 Damage to the portside is visible as the USS John S. McCain steers toward Changi Naval Base, Singapore, following a collision with a merchant vessel, Aug. 21, 2017. (Joshua Fulton/U.S. Navy) 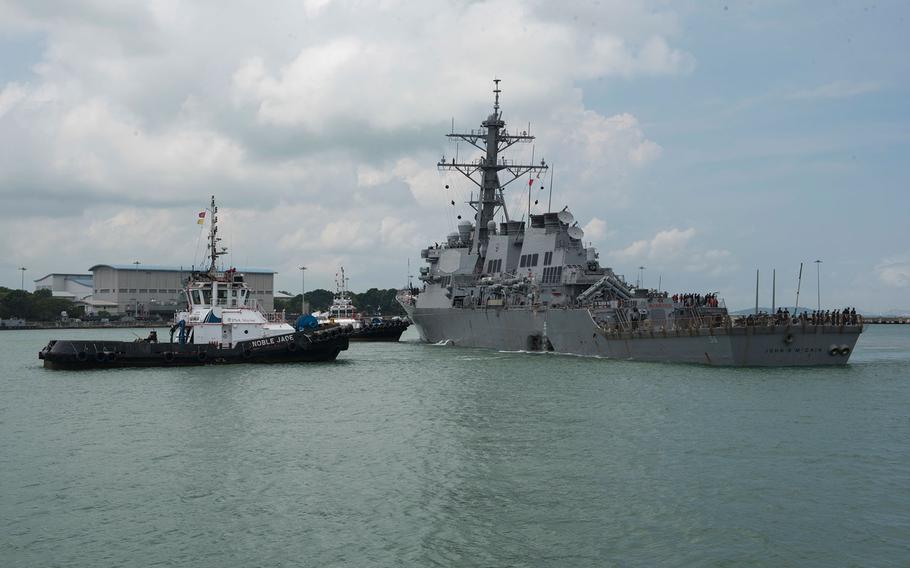 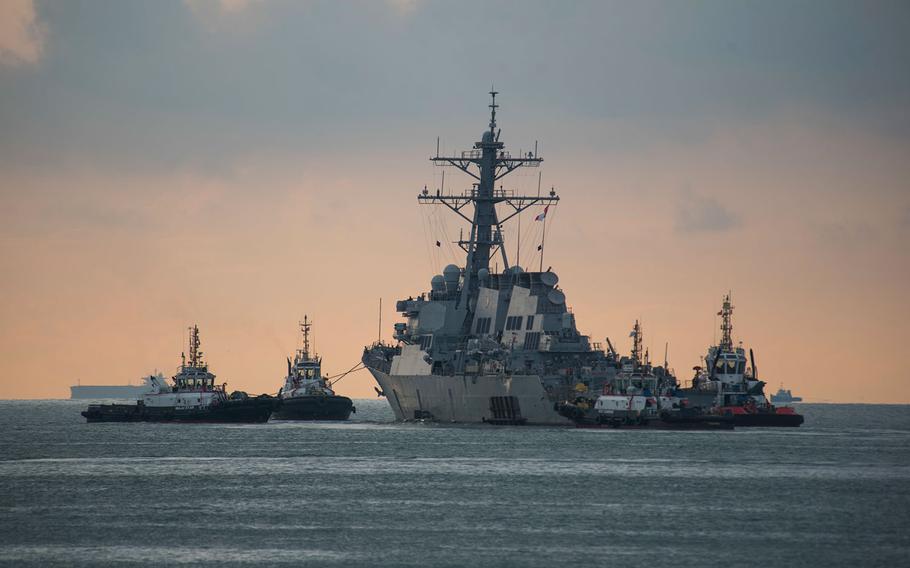 The USS John S. McCain is towed away from the pier at Changi Naval Base, Singapore, to meet the heavy lift transport vessel MV Treasure, Oct. 5, 2017. (Joshua Fulton/U.S. Navy) 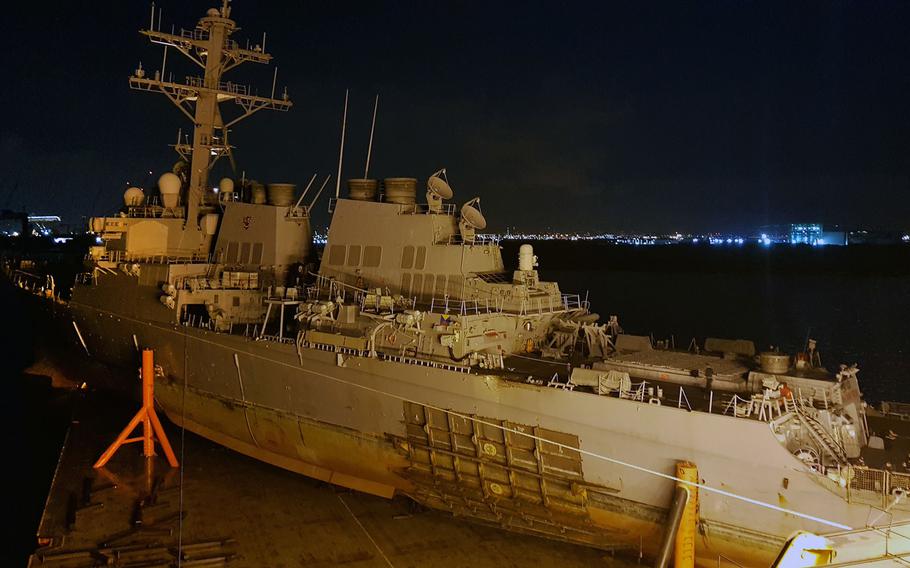 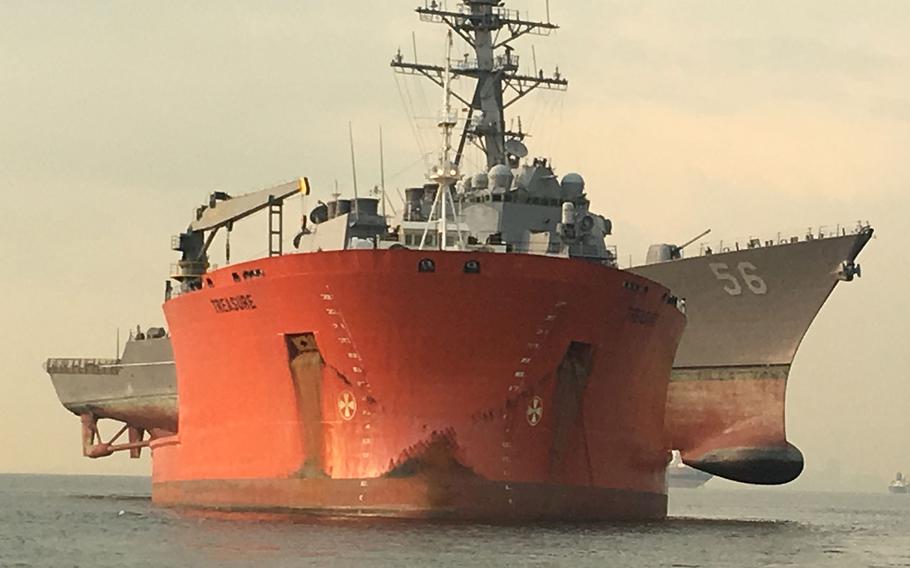 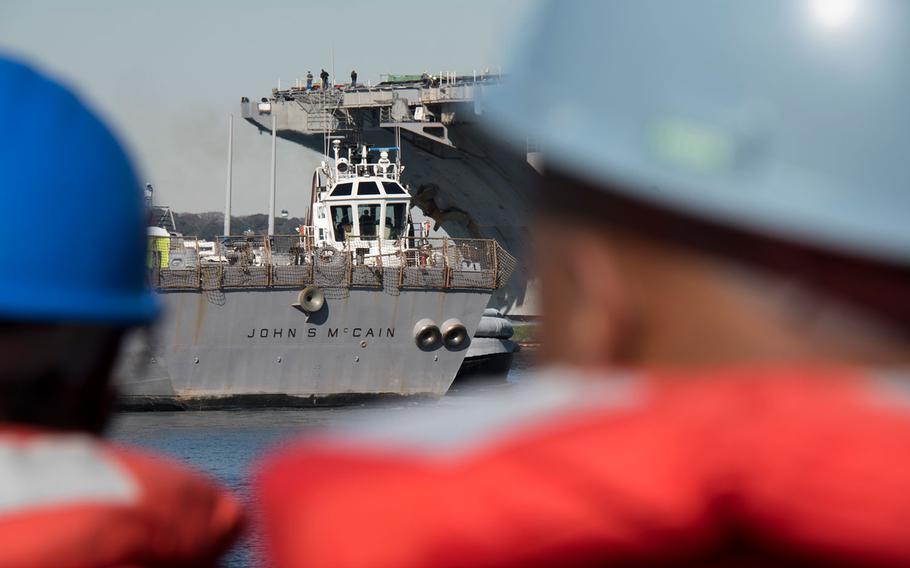 YOKOSUKA NAVAL BASE, Japan — Family, friends and sailors gathered at Yokosuka’s chapel Tuesday to mark one year since a fatal collision took the lives of 10 sailors aboard the USS John S. McCain.

The guided-missile destroyer crossed into the path of a Liberian-flagged oil tanker in the Strait of Malacca east of Singapore on Aug. 21, 2017. The tanker impaled the McCain’s port side, killing the sailors and injuring five others.

“We remember our fallen Shipmates today alongside many friends and family,” said a message posted Tuesday to the ship’s official Facebook page. “Their loss speaks to the bravery, resolve and resilience of all those who serve and have served aboard USS John S. McCain. We will never forget them.”

At sunrise Tuesday, the crew of the McCain, which has been undergoing repairs at Yokosuka since December, held a 5K run on base in honor of their fallen shipmates. The destroyer’s leadership aims to make it an annual event to mark future anniversaries of the collision.

Later that morning, “a solemn remembrance ceremony” was held at Yokosuka’s Chapel of Hope “in memory of the ten Sailors who lost their lives,” 7th Fleet spokesperson Lt. Joe Keiley said in an email to Stars and Stripes. The gathering included McCain crew members, base residents and some family members of the fallen.

“Our thoughts and prayers will always remain with the families of our lost Sailors,” Keiley added.

The base hosted a similar ceremony on June 17 to mark one year since the Fitzgerald collision. The Navy also held a ceremony in Pascagoula, Miss., where the ship is undergoing repairs that are estimated to cost about $367 million, according to a Jan. 19 report by the U.S. Naval Institute.

“It’s been a year since we lost our seven shipmates. A very moving and fitting ceremony was held on the flight deck,” said a message posted to the Fitzgerald’s official Facebook page on June 20. “Ingalls Shipyard did a remarkable job getting the ship ready. They even placed seven roses on the repaired berthing bulkhead. Crew was steadfast and strong.”

Media were not invited to attend the remembrance ceremonies out of respect for the families.

Secretary of the Navy Richard Spencer said the McCain should be sea-ready by the first half of next year.

“We are looking at spring of ‘19 to get her underway with trials and make sure she’s good to go, and then head out to the fleet,” he said in June while visiting the ship in dry dock.

Spencer came aboard the vessel during its rededication ceremony to include Sen. John McCain III to the ship’s list of namesakes. Prior to that, it honored the ailing senator’s father and grandfather — John S. McCain Jr. and John S. McCain Sr. — who were both Navy admirals.

After the collisions, the Navy issued a report deeming the crashes “avoidable.” Leadership then made recommendations, revised some policies and created additional training, including a new surface warfare officer program, to avoid future incidents.

At the McCain rededication ceremony in June, Spencer told reporters the recommendation implementations were about 78 percent completed.

“Our continuous-learning organization culture, that’s going to take a few years to get rolling throughout the whole fleet,” he said. “So, while we’ve implemented 78 percent, we’re constantly measuring and assessing what we see as outputs and making corrections along the way to those recommendations.”