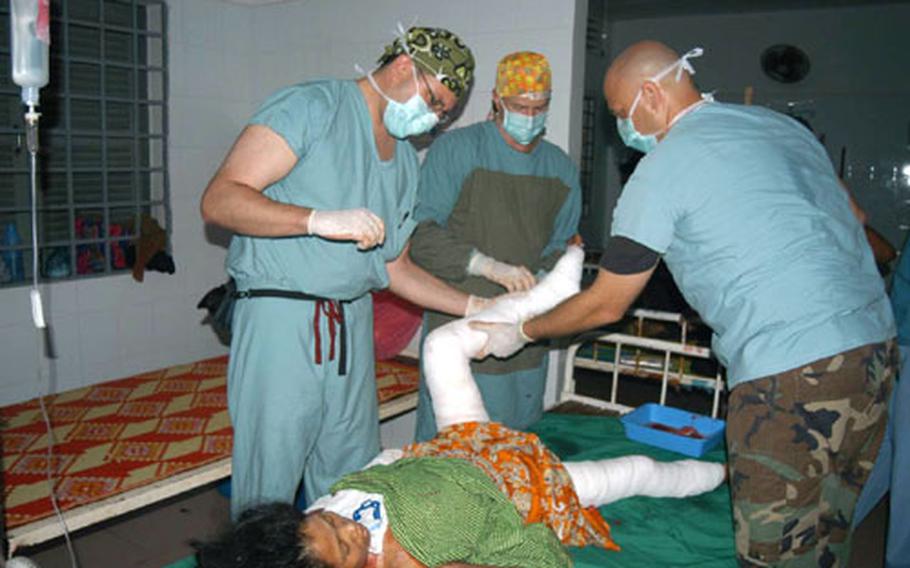 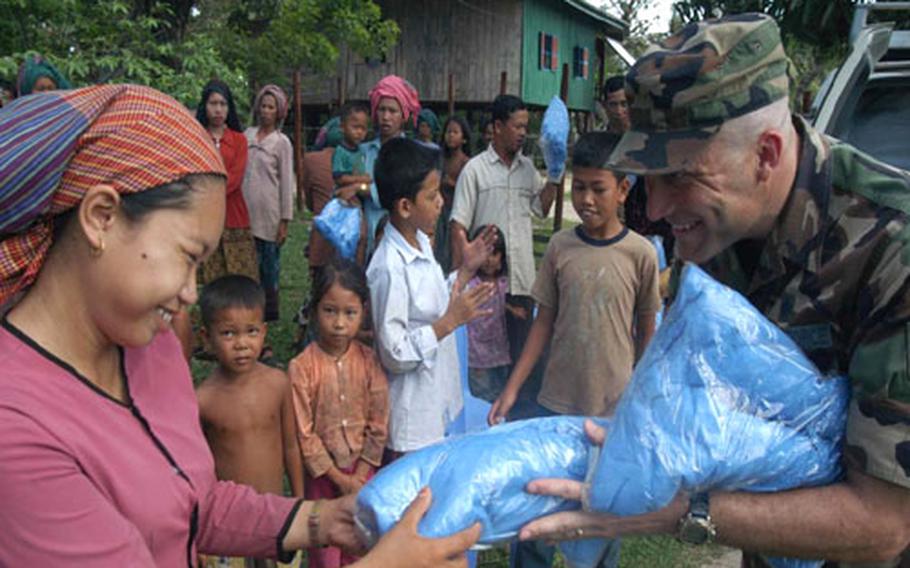 Air Force Tech. Sgt. Bryan Gray hands out mosquito nets to a Cambodian woman in a small village near Kep, Cambodia, Thursday. Gray is a biomedical equipment repair technician with the 18th Medical Support Squadron at Kadena Air Base, Okinawa. He&#39;s part of a 20-member team participating in BRAVA 2004. (Courtesy of USAF) 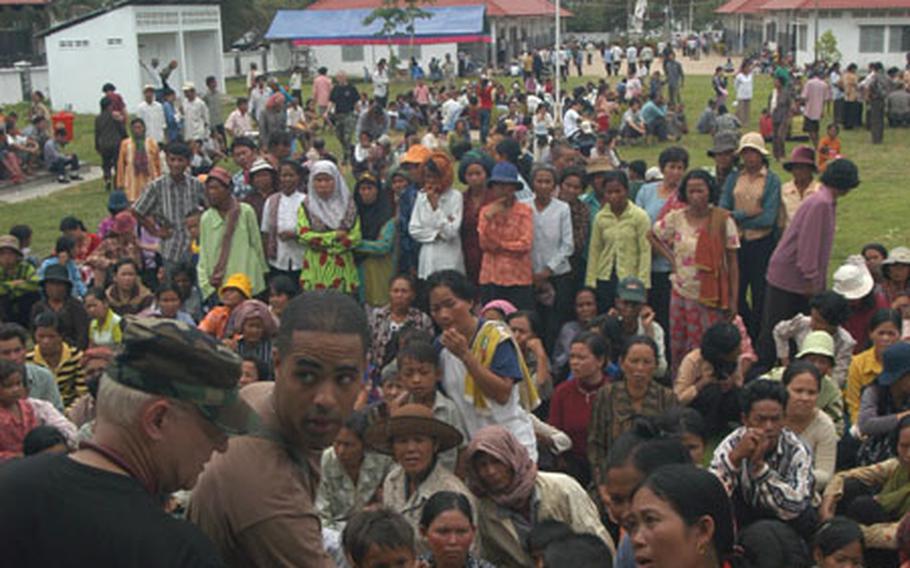 U.S. Army Capt. Erick Martell and U.S. Air Force Lt. Col. Gerald E. Tanner assess possible patients in a hospital compound in Kep. Martell and Tanner are part of a 20-member blast resuscitation and victim assistance mission — known by medics as BRAVA — that arrived for a two-week humanitarian mission. The mission is sponsored by the U.S. Pacific Command and will be conducted May 14-31. Martell is a surgeon normally assigned to the Tripler Army Medical Hospital in Honolulu, Hawaii. Tanner is an anesthesiologist normally assigned to the U.S. Air Force Academy in Colorado Springs, Co. (Courtesy of USAF) 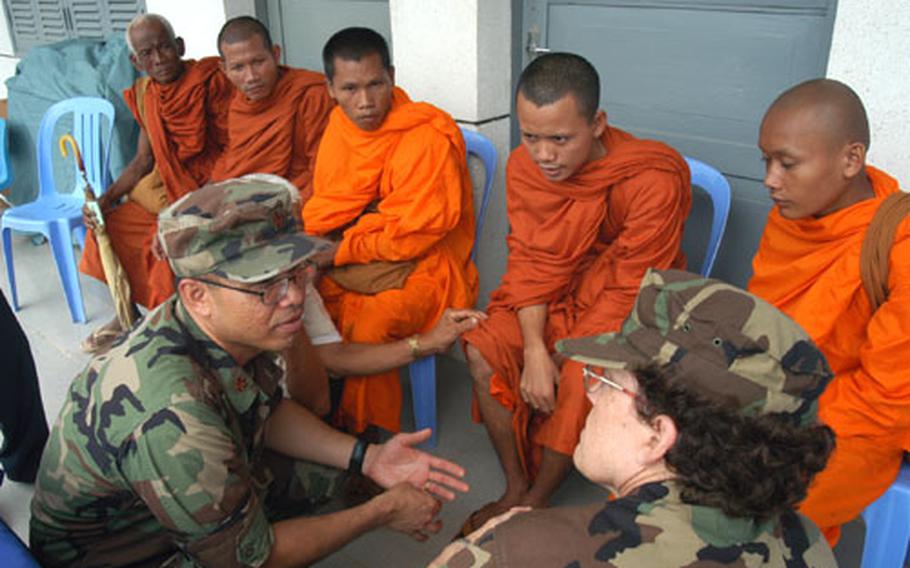 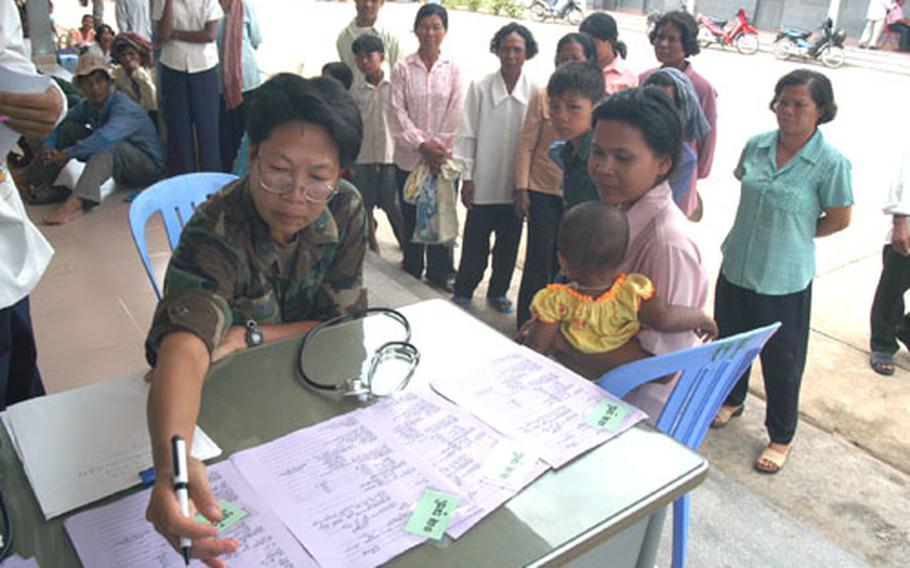 During their first week in Cambodia, U.S. military medics on a humanitarian mission treated more than 620 patients and scheduled 100 surgeries in a small hospital complex in the seaside town of Kep, on the country&#8217;s southeast coast.

&#8220;We&#8217;re seeing about 150 patients a day and we&#8217;re doing nine surgeries a day,&#8221; said Air Force Lt. Col. Diep Duong, team leader for BRAVA 2004 &#8212; a 20-member blast resuscitation and victim assistance mission sponsored by the U.S. Pacific Command. Most of the patients have burns, thyroid problems and hernias, she said, according to a mission press release.

&#8220;The majority of the surgeries happening here are procedures to restore functions in limbs and relieve pain,&#8221; Duong said.

One woman treated by the team had burns over 40 percent of her body from a propane gas explosion a month ago.

Capt. Jason Rosenberg, a reconstructive plastic surgeon, said the woman will have serious scarring and the loss of some movement of a hand.

Both doctors said they found that work in Cambodia reinforced why they got into medicine.

Added Rosenberg, &#8220;I feel really fortunate to be able to help folks because it makes me appreciate where we are and where we live.&#8221;

Walter said he joined the National Guard three years ago to get back in action.

Duong praised the team members, who also handed out 300 mosquito nets in three villages near Kep.

The BRAVA team members are from various Air Force, Navy and Army units around the world. Although the team members never worked together before, Duong said, they are gelling well.

&#8220;It&#8217;s going so smooth that we were able to take on an additional standby case in the surgical unit,&#8221; she said, stressing that their work is important because no one else is providing the kind of treatment in the area that BRAVA is able to give.

Some patients have traveled more than 200 miles to see the team, she added.

The team is working in an area that once was a popular seaside resort and retreat for French colonials in the early 20th century and became a recreation spot for the Khmer elite in the 1960s, according to Travel Indochina (www.travelindochina.com). Much of it was reduced to rubble during the ferocious fighting in the 1980s between the Khmer Rouge and government forces.