Brains and brawn put to test in challenge 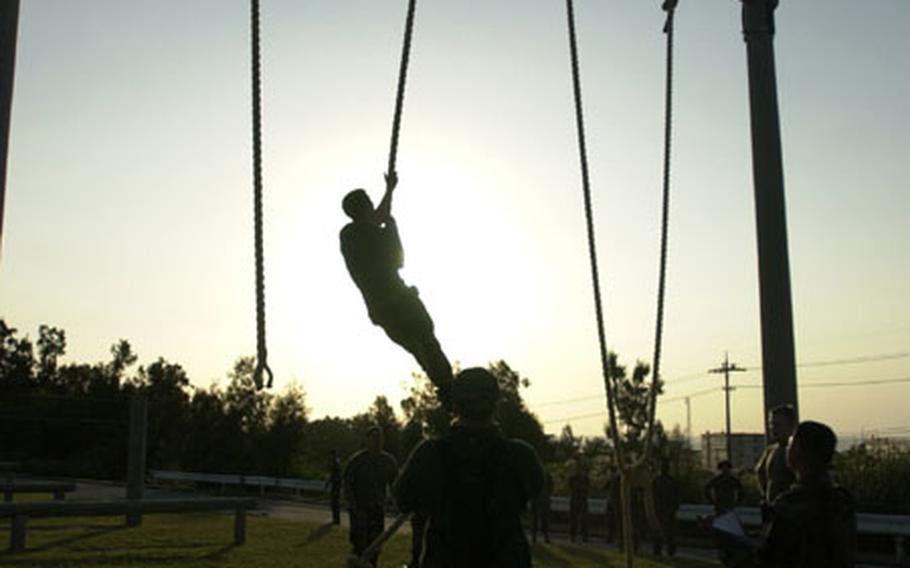 A participant in the 11th Annual III MEF Commanding General&#39;s Battle Skills Competition makes his way up the rope at the end of the obstacle course Wednesday on Camp Schwab. (Fred Zimmerman / S&S)

A participant in the 11th Annual III MEF Commanding General&#39;s Battle Skills Competition makes his way up the rope at the end of the obstacle course Wednesday on Camp Schwab. (Fred Zimmerman / S&S) 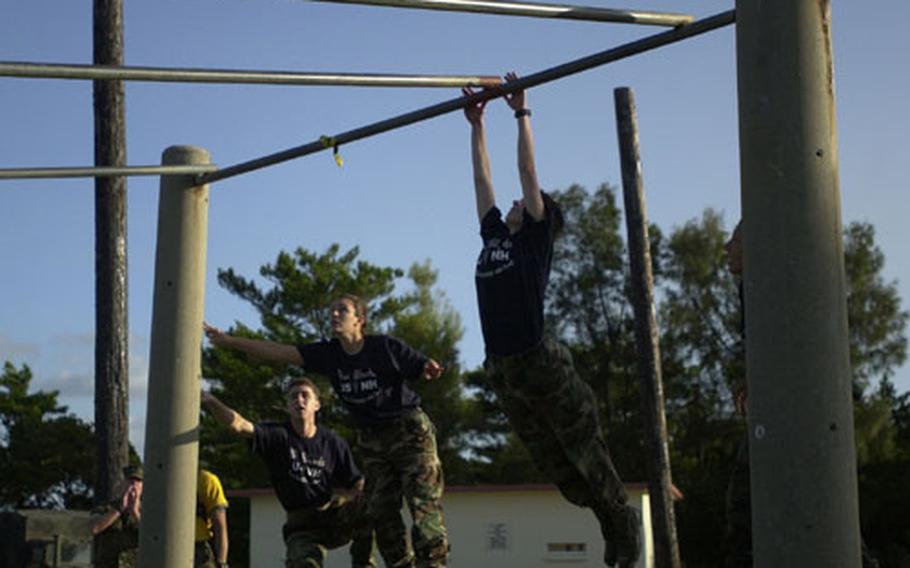 A member of the almost all-female team from the U.S. Naval Hospital Okinawa stretches out to reach the bar on the obstacle course at Camp Schwab Wednesday. The team was comprised of only females until Tuesday, when one team member injured her ankle and a male alternate took her place. (Fred Zimmerman / S&S) 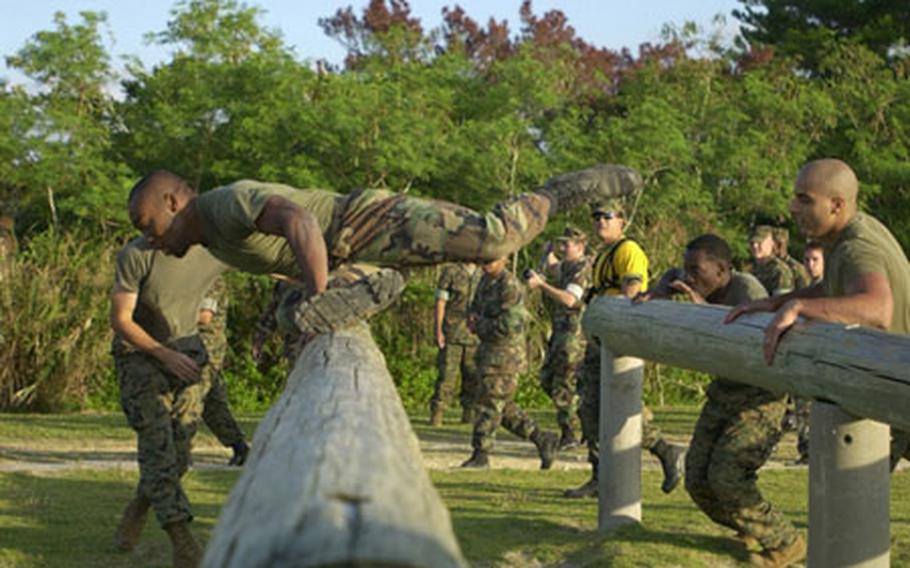 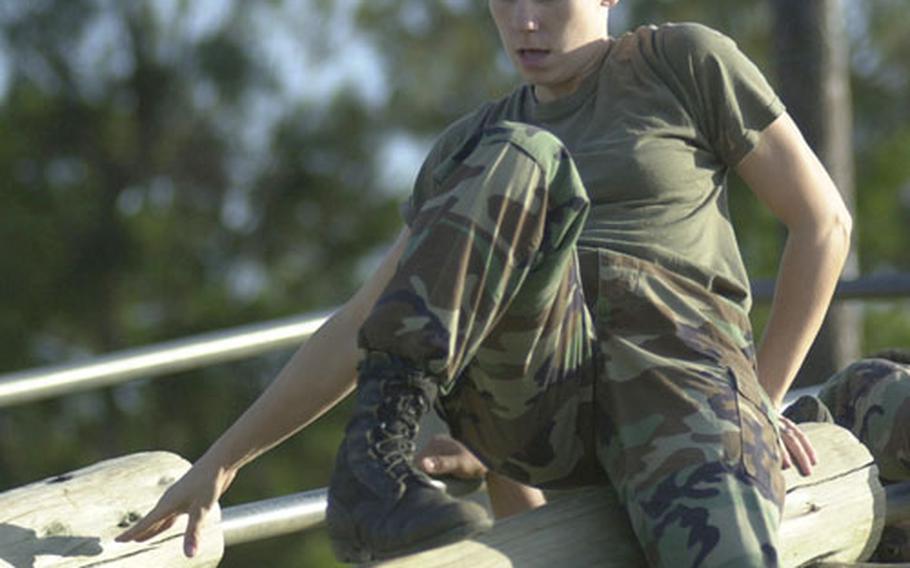 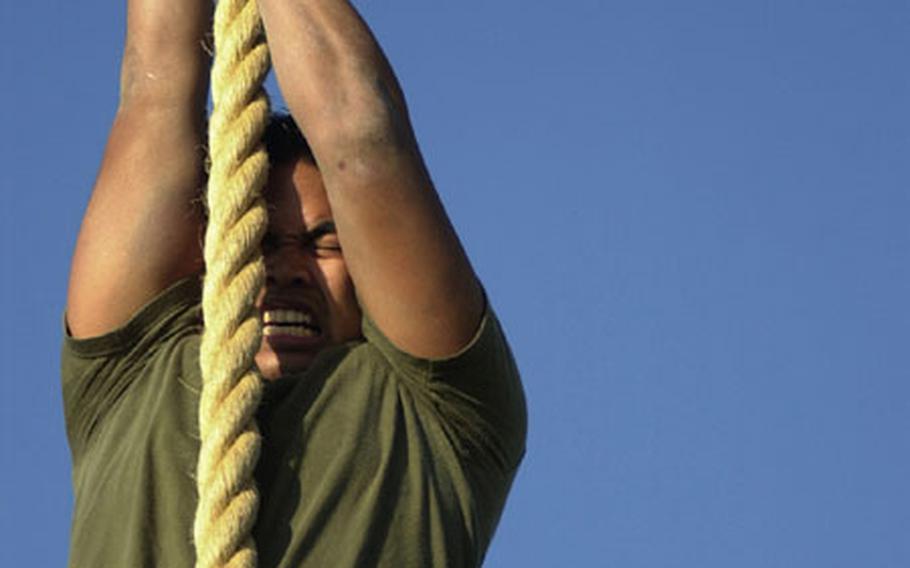 A sailor uses all his strength to pull himself up the rope at the end of the obstacle course Wednesday during the Battle Skills Competition at Camp Schwab. (Fred Zimmerman / S&S)

CAMP COURTNEY, Okinawa &#8212; Seven teams of sailors spent the last week battling it out for bragging rights as the best on Okinawa.

Each team was made up of eight sailors, all E-5 and below, with six members and two alternates. Most of the sailors who participated are eligible for deployment with the Fleet Marine Force, he added.

The winners were determined through competition in seven events: a 75-question exam on the Fleet Marine Force program, medical and military skills, land navigation, endurance course, obstacle course, pistol competition, Zodiac boat race and a 12-mile forced march with packs. The winning team from 3rd Marine Division took first in every event except the march, in which it took a close second.

&#8220;These sailors take pride in completing the competition,&#8221; Talosig said. Even though the competition is tough, he added, the sailors who compete always look forward to the event and spend their free time preparing.

&#8220;We did the obstacle course a lot and boots-and-[utilities] runs,&#8221; Valdez said. The team also held a couple of seven- to eight-mile forced marches.

While the teams may have practiced for the event, nothing is as grueling as the real thing.

But this was hardly a men-only affair.

U.S. Naval Hospital had two teams, one that was all female until one competitor injured an ankle during the second day and had to be replaced by a male alternate.

Most thought the week&#8217;s most grueling event was the endurance course at the Jungle Warfare Training Center, where knee- deep mud and rope bridges challenged the sailors.

Porter said 3rd FSSG adapted to each event and worked off each other&#8217;s strengths and weaknesses.

Each member of the winning team earned a Navy/Marine Corps Achievement Medal and a coin from the III MEF commanding general. All others received a Commanding General&#8217;s Certificate of Commendation.