Brain surgery in the Iraq desert 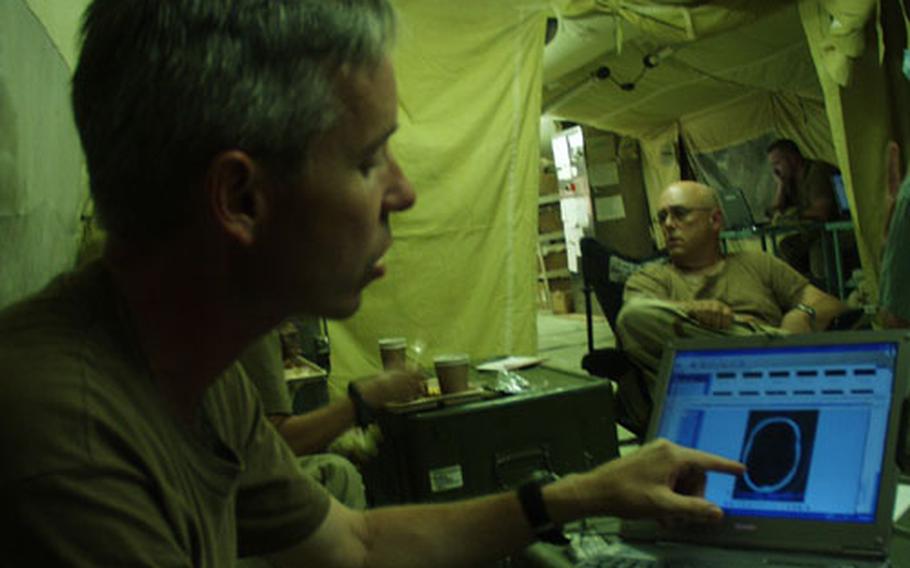 Lt. Col. Kevin Cannard, a neurologist with the Army’s 207th Neurosurgical Team, shows X-rays of a soldier who survived a major bomb blast and later had part of his brain removed in order to save his life. (Lisa Burgess / S&S)

BAGHDAD, Iraq &#8212; The drab warren of tents set up in the middle of the desert is an unlikely place for a team of brain surgeons.

But Army doctors here are performing procedures they say have never been performed outside a major hospital, including one surgery that saved a U.S. soldier&#8217;s life by removing a section of his brain.

Now, the same doctors who are considered pioneers in their field of neurology &#8212; the treatment of the brain and spine &#8212; have donned combat fatigues to work at the 28th Combat Support Hospital at Camp Dogwood, a remote base southwest of Baghdad.

The team includes two neurosurgeons, Lt. Col. Rocco Armonda, the only cerebrovascular specialist in the U.S. military, and Lt. Col. Richard Teff, along with Lt. Col. Kevin Cannard, a neurologist who is assistant chief of the Neurology Department at Walter Reed.

On Wednesday, a soldier came in who had been shot through the neck, Cannard said. The soldier was barely able to control one side of his body, a condition called hemiparasis, Latin for half-weakness.

The question the neurology team needed to answer was, what was causing the weakness? If the culprit was a lack of adequate blood flow to the spinal cord, it could cause permanent paralysis if the problem weren&#8217;t rectified, Cannard said.

The only way to find out what was going on was for the neuro team to perform an angiogram, which involves inserting a flexible tube into an artery, usually in the groin area, and guiding it through the arterial system into the heart and into the coronary arteries. A dye is then injected through the tube into the bloodstream and X-rays are taken.

The procedure was a success, and showed the doctors that &#8220;the concussion [of the bullet&#8217;s impact] gave [the soldier] a shock injury to the spinal cord and caused a major blood vessel in the neck to go into spasm,&#8221; Cannard said.

The spasm was keeping blood from flowing efficiently to the spinal cord. The team gave the soldier a blood thinner to make it easier for blood to get through the narrowed vessel. The patient was transported to Germany for further treatment, Cannard said.

The most difficult surgery the team has performed in Iraq was three weeks ago: a history-making combination of a carotid artery bypass and partial frontal lobotomy, Cannard said.

The patient was a soldier injured by a bomb. The left front side of his head had been torn apart in the blast.

The soldier was not identified because he was unavailable for comment, and therefore, did not give permission for his name to be used.

The swelling brain had only one place to go &#8212; through a hole the blast had broken in the soldier&#8217;s skull. And once outside the skull, that portion of the brain basically died, Cannard said.

Meanwhile, another blood clot outside the brain was crushing it from the other direction &#8212; outside in, Cannard said.

The neurosurgeons had only one choice: a partial frontal lobotomy to remove the dying portion of the brain. That procedure would open enough space inside the skull to relieve pressure on the surviving part of the brain.

&#8220;Fortunately, you can lose a little bit up here and still be fine,&#8221; Cannard said, pointing above his left temple.

The neurosurgeons had another crisis on their hands. The soldier&#8217;s carotid artery &#8212; the main artery that supplies blood to the brain &#8212; was crushed. Without blood to the brain, the soldier would have a stroke and die.

Between the two procedures, the neurosurgeons were in the operating room for 10 hours. But the soldier&#8217;s life was saved, and he has not lost any mental capacity.