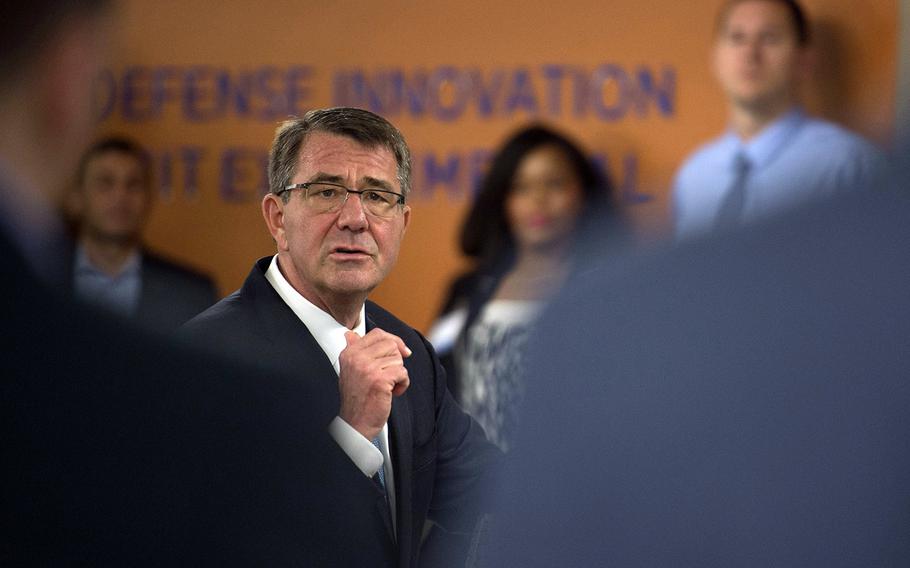 Secretary of Defense Ash Carter speaks with Defense Innovation Unit Experimental employees on May 11, 2016, in California. On Tuesday, July 26, 2016, Carter announced in Boston the next step forward in the Pentagon's innovation agenda. (Adrian Cadiz/U.S. Air Force)

The Pentagon’s start-up Defense Innovation Unit Experimental, or DIUx, recently entered into its first official partnership with a commercial technology firm to develop or adapt projects to help American troops on future battlefields, Carter announced in Boston, where he formally opened the Silicon Valley-based DIUx’s East Coast office. The agreement with that firm, Halo Neuroscience, will allow the military to explore uses for the company’s headphone-like brain stimulator designed for elite level professional athletes.

DIUx has created teams to scout and directly engage with commercial technology organizations to identify technologies that the Pentagon might be able to adopt or co-develop with the firms to increase servicemembers’ warfighting capabilities, Carter said. It is also using new authorities granted by Congress last year that drastically reduce the amount of time needed for the Defense Department to partner with a tech firm.

Using those authorities, DIUx entered into the partnership with San Francisco-based Halo in only about 30 days. Such an agreement could have taken months, if not years, in the past.

“This new approach is already generating lots of enthusiasm,” Carter said. “Our military services, combatant commands, and defense agencies like the speed and agility it affords.”

The partnership with Halo is among 15 initial commercially developed projects DIUx aims to adapt to military use in the coming months. Other programs include developing a tiny drone with the ability to perceive its environment to map out tightly confined spaces such as caves, tunnels or ships, and an artificial intelligence machine that can automatically sift through millions of Internet posts to identify extremist material.

Halo Neuroscience was founded in 2013 by a team of doctors, neuroscientists and engineers to develop technology to improve brain function. Its first commercially available product, Halo Sport, uses energy pulses that the company claims speed up the brain’s ability to develop new neural pathways, better connecting brain function to the body. The company calls the process “neuropriming,” and claims research shows athletes who have used it develop “more precise, coordinated, and … explosive movement.”

The device has been championed by several athletes training for the 2016 Olympic Games in Rio De Janeiro, Brazil and is in use by athletes in professional baseball, football and basketball, according to a Halo statement.

“These headsets will be used by teams from our special operations forces, who will work with Halo to gauge how effective their device might be at improving marksmanship, close-quarters-combat skills, and overall strength training,” Carter said.

During his stop in Boston, Carter also announced he increased the size of the Defense Innovation Board to include 15 high-level advisers from leading private and public innovation and technology organizations.

The board, led by Alphabet Executive Chairman Eric Schmidt will also include Jeff Bezos, the president, chairman and CEO, Amazon Inc. and the owner of the Washington Post; Marne Levine, the chief operating officer of Instagram, and Neil deGrasse Tyson, the renowned astrophysicist and author. Carter had previously announced it would include Schmidt, retired Navy Adm. William McRaven, who is a former Special Operations Command chief, and biographer and Aspen Institute CEO Walter Isaacson.

The board is expected to make its first round of recommendations concerning the Pentagon’s innovation tactics by the fall, Carter said.

“I’ve given them the very specific task of identifying innovative private sector best practices that could be of use to [the Defense Department] — not unlike our recent Hack the Pentagon pilot program, which invited hackers to help find vulnerabilities in our networks,” Carter said. “It’s a perfect example of the kind of thing I’m looking for the Innovation Board to recommend.”