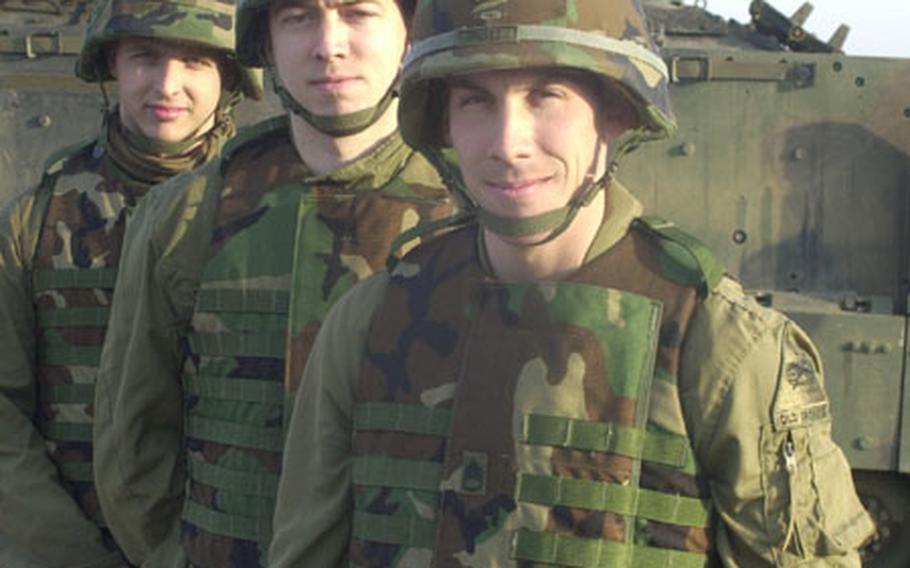 Staff Sgt. Eric Knott, 31, foreground, Spec. James Conn, 27, behind Knott, and Pfc. Joshua Reasoner, 21, are the sole members of Club 34, their Bradley Fighting Vehicle. Even with war looming, the soldiers from the 2nd Battalion, 6th Infantry Brigade of the 1st Armored Division say the don’t believe anything can rattle their calm, collected approach to work. (Terry Boyd / S&S)

Moving from the conceptual to the concrete, you get three soldiers like Staff Sgt. Eric Knott, Spc. James Conn and Pfc. Joshua Reasoner of Company A, 2nd Battalion, 6th Infantry Brigade.

Laid-back, happy-go-lucky and deadly, they are not stereotypical &#8220;hooah&#8221; Army. But they are good at their jobs and loyal to one another.

When asked who the best crew is, a number of other Bradley crewmembers at a gunnery range practice last week in Baumholder pointed to Knott and Company.

While membership has its privileges, it also has its obligations. Although Club 34 hasn&#8217;t gotten its deployment orders, it&#8217;s not unlikely that Knott, Conn and Reasoner may soon be chauffeuring dismounted infantry into battle to attack enemy flanks inaccessible to heavy Abrams main battle tanks.

Talking quietly on the side of Baumholder&#8217;s Range 11 last week, the three expected combat to be messy, but were convinced that each would do whatever it takes to survive. And it doesn&#8217;t hurt that these guys can shoot.

Knott is the Bradley commander, with Conn gunning and Reasoner driving. They are friends, yet they seem totally different. The eldest at 31, Knott admits to being obsessive about having everything just so inside Club 34.

While they pride themselves in never being &#8220;serious,&#8221; they approach their job methodically, Knott says. Getting the weapons zeroed in. Acquiring and staying on target. Correcting quickly when they&#8217;re off.

But theirs is not an easy world to make a mark, and senior noncommissioned officers are not impressed. One 1st AD NCO wearing a Combat Infantry Badge from the Persian Gulf War says shooting &#8220;distinguished&#8221; on Bradley Table 8 is no indicator of future combat performance.

In combat, everything gets speeded up, and crews must learn to react to stay alive &#8212; something you can only learn in combat, he says.

Club 34 may not have been in combat, but it takes pride in learning everything there is to know about the Bradley.

If this crew has an advantage over any other it is there conviction that their cohesion will get them through anything.