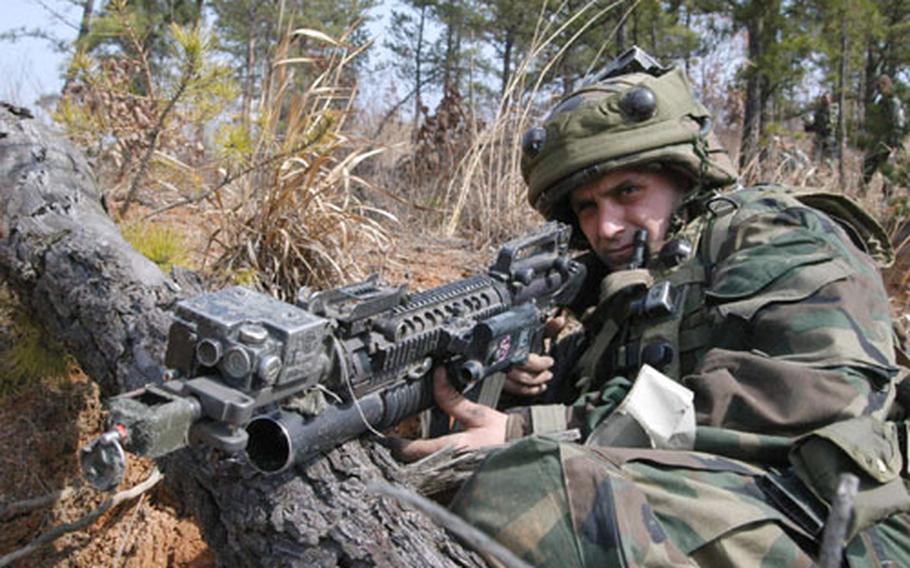 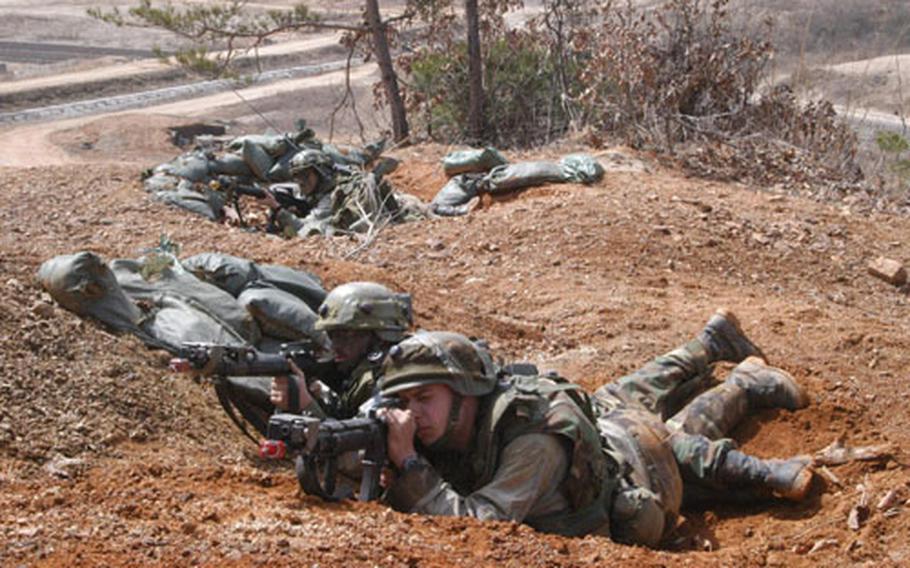 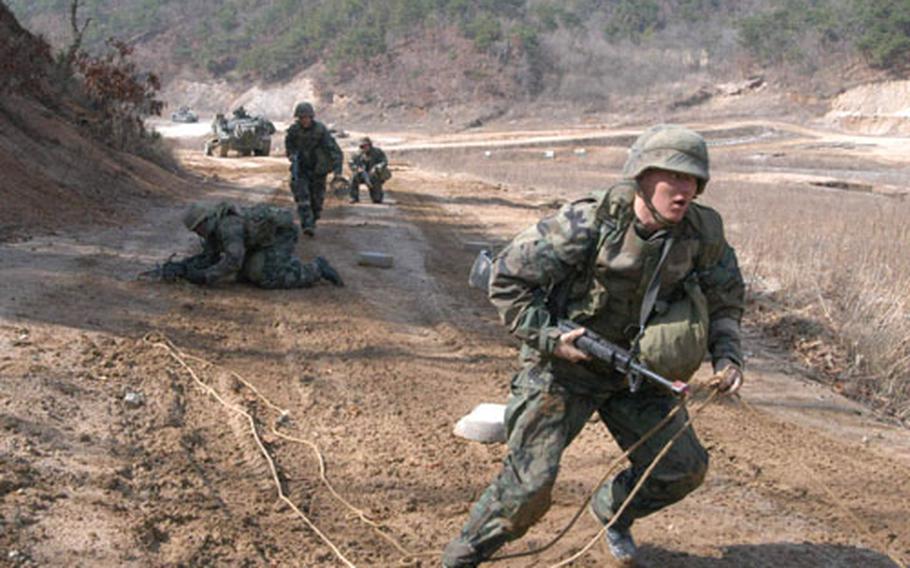 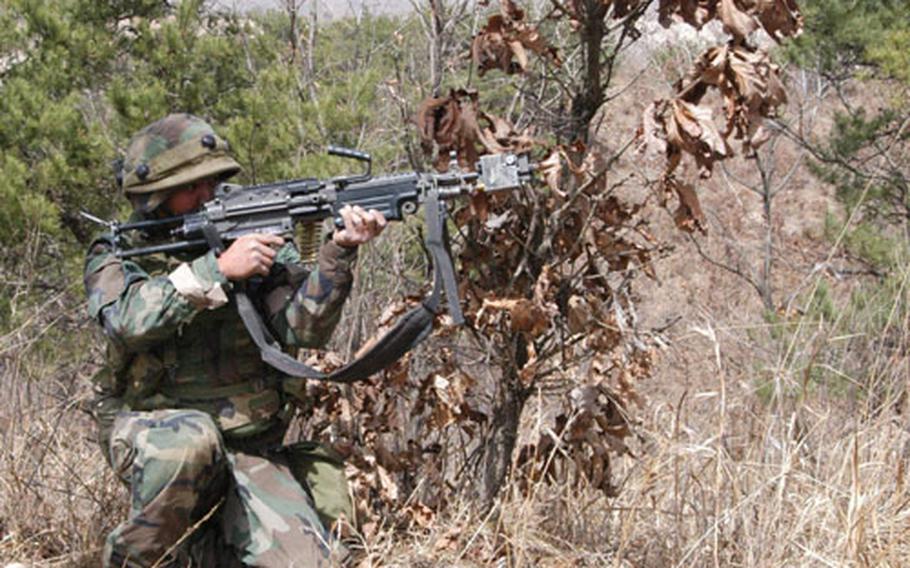 An A Company soldier fires at the "enemy" at Rodriguez Range Tuesday. (Seth Robson / S&S) 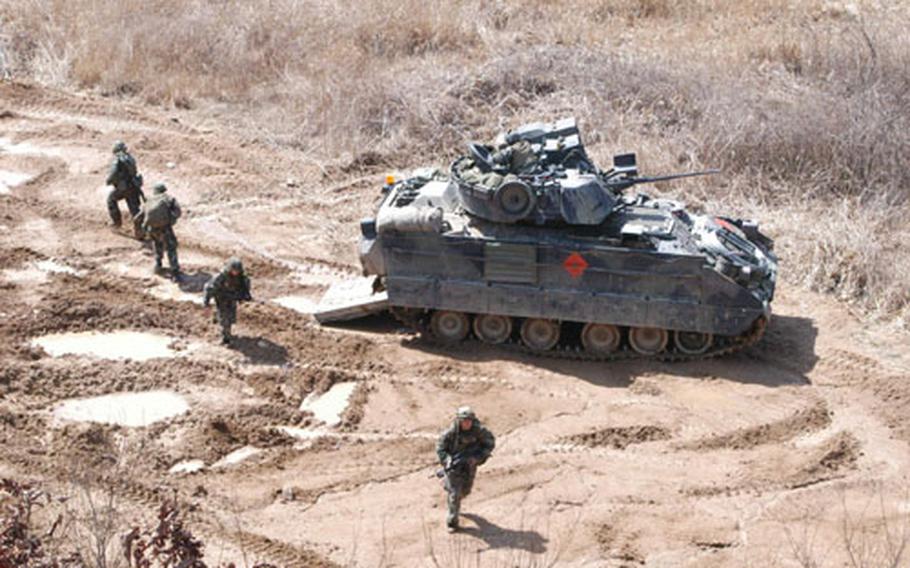 They were using blank rounds and laser training systems to attack in combination with Bradley Fighting Vehicles. When the rounds ran out, they could still &#8220;kill&#8221; the enemy by shouting &#8220;bang&#8221; and shooting them with their lasers.

On Tuesday, A Company squared off against soldiers from 1-9&#8217;s Headquarters and Headquarters Company, who turned their uniforms inside out to identify themselves as the Op For &#8212; or opposing force.

Opposing forces used a Humvee with a .50-caliber machine gun, a dismounted observation post, a nine-man infantry squad, and a Bradley protected by a &#8220;minefield&#8221; and a strand of barbed wire.

The first attacking group of A Company soldiers and Bradleys destroyed the Humvee as it attempted to move across the battlefield, then sent a squad of dismounted infantry up a hill overlooking the opposition positions.

The squad set up a support-by-fire position on the hilltop while an assault team moved around the hill under covering fire and outflanked the opposition.

Within minutes, all of the enemy soldiers had been &#8220;killed&#8221; without the loss of a single A Company soldier.

Soon after the battle Pfc. Jake Perry was pulling security armed with an M-16 and a 40 mm grenade launcher near an enemy bunker he and his comrades had overrun.

The Texas native, who joined the Army 10 months ago, is used to physical labor but found it tough climbing South Korea&#8217;s steep hills carrying his weapon, body armor and other equipment weighing more than 25 pounds.

Exercise observer and controller 1st Lt. Scott Polasek said the opposition didn&#8217;t detect the attack until it was too late.

&#8220;This was the first run. Right now, they are thinking about what they are going to do the next time,&#8221; he said as a group of engineers detonated a small charge to clear the minefield below.

Soon the soldiers were piling into their Bradleys and moving on to their next objective while another A Company squad prepared to attack.

About an hour later, the second attack came. Once again, the Humvee was destroyed quickly and the soldiers attempted a flanking movement supported by machine gun fire from the overlooking ridgeline.

This time, however, the opposition was ready.

As the battle progressed, attacking soldiers&#8217; laser-sensitive harnesses started beeping, signaling they probably would have been killed by the defenders. Other soldiers fired so many blank rounds they ran out and had to yell &#8220;bang.&#8221;

Polasek said the opposition would have killed most of the attackers this time.

&#8220;They knew what was happening. The attacking team didn&#8217;t have very good support by fire set in and that is so important. Because of that the enemy could run wherever they wanted to and they couldn&#8217;t control where he was,&#8221; he said.

Lt. Col. Joseph Southcott, the 1-9 commander, said his soldiers have shot gunnery at Rodriguez Range since March 12, qualifying Bradley crews in Tables VI, VII as well as some infantry training.

Bradley platoons, with their four vehicles and two infantry squads, are special, he said.

Now 1-9 is making the transition to platoon training, Southcott said.

&#8220;What the Bradley platoon practices is integration of infantry squads on the ground and the mounted element. That is the challenge of being a mechanized infantry platoon leader. This is a chance for those guys to practice that,&#8221; he said.

The company repeated Tuesday&#8217;s blank-fire exercise with live ammunition &#8212; firing at targets &#8212; at the range on Thursday.