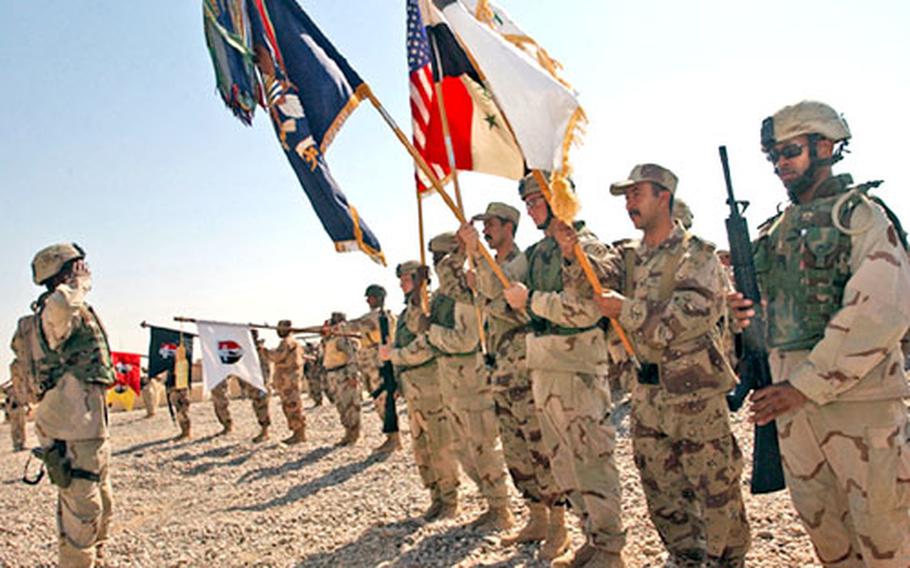 U.S. and Iraqi soldiers salute as the colors are passed during the transfer of Forward Operating Base Omaha in Tikrit, Iraq. (Matthew Acosta / Courtesy of U.S. Army)

U.S. and Iraqi soldiers salute as the colors are passed during the transfer of Forward Operating Base Omaha in Tikrit, Iraq. (Matthew Acosta / Courtesy of U.S. Army) 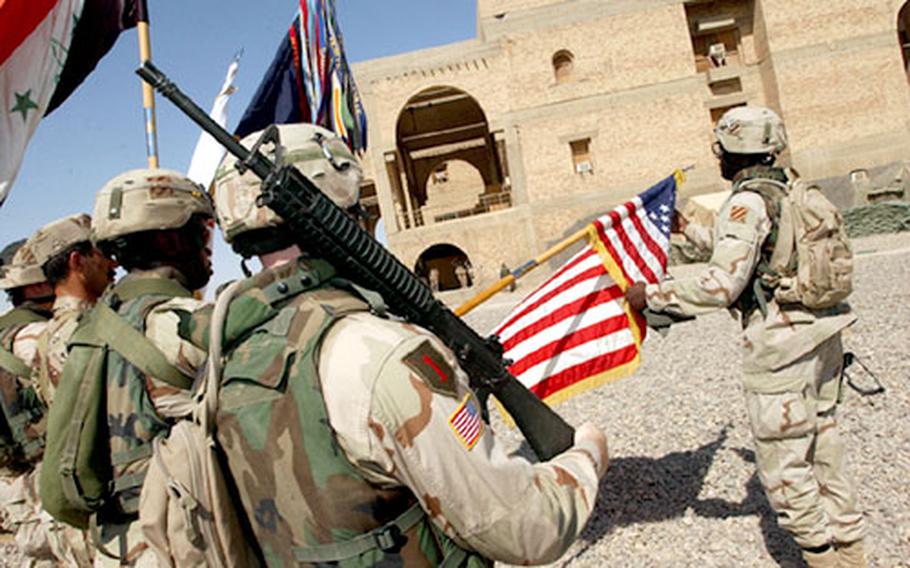 A Task Force Liberty soldier wraps up the U.S. flag during the transfer of authority of Forward Operating Base Omaha. (Matthew Acosta / Courtesy of U.S. Army) A color guard stands ready to case the United States and unit flags during the transfer of authority of Forward Operating Base Omaha. (Matthew Acosta / Courtesy of U.S. Army)

The program sometimes referred to as &#8220;BRAC in Iraq&#8221; continued this week with soldiers attached to the 42nd Infantry Division returning to Iraqi control two palace complexes near Tikrit.

Eventually, U.S. military officials have said, the 106 existing American bases in Iraq could be consolidated onto four main hubs that would combine air and ground operations. The models for those new hubs would be such sprawling complexes as the Air Force and Army compounds at Balad and Logistics Support Area Anaconda.

But to get there, they have to close one base at a time. Across Iraq, just over a dozen bases have been returned to Iraqi control, U.S. officials said. The process mirrors the Base Realignment and Closure effort now consolidating and closing bases in the U.S.

The point, said Lt. Col. John Charvat, 1st Brigade Combat Team, 3rd Infantry Division executive officer, &#8220;is to make a smaller Coalition Force footprint, as well as demonstrate to the Iraqi people that the Coalition Forces are not here in Iraq permanently.&#8221;

In one case, Forward Operating Base Omaha was handed over Saturday to the 1st Battalion, 1st Brigade, 4th Iraqi Division. The U.S. soldiers of the 3rd Infantry Division, assigned in Iraq under the command of the 42nd ID, moved to nearby Forward Operating Base Remagen. The handover ceremony included U.S. and Iraqi soldiers passing flags in front of the palace, one of the hundreds built by Saddam Hussein around the country.

As of July 31, soldiers near Tikrit have closed and returned three bases. The early focus has been on the palaces, particularly symbolic to the Iraqi people after the fall of Saddam.

There are no cost savings associated with the closures for U.S. forces, but they provide the fledgling Iraqi army with &#8220;capabilities they did not previously have,&#8221; said Capt. Alex Elmore, a 1st BCT engineer on the closures team. Each brigade combat team in the division has a closures team made up of engineers, supply officers, environmental officers, contracting reps and liaisons with the Iraqi army.

&#8220;It helps legitimize [Iraqi army] efforts and helps us establish the fact that we are not an army of occupation,&#8221; Elmore said. &#8220;The more we can turn over to the Iraqi army means the requirement for U.S. soldiers is also lessened.&#8221;

While Forward Operating Base Omaha will be handed to the Iraqi military, other bases will see different fates.

The bases have undergone a series of improvements while under U.S. control, including new buildings, air conditioning and the installation of generators. In many cases, those additions will be left behind.