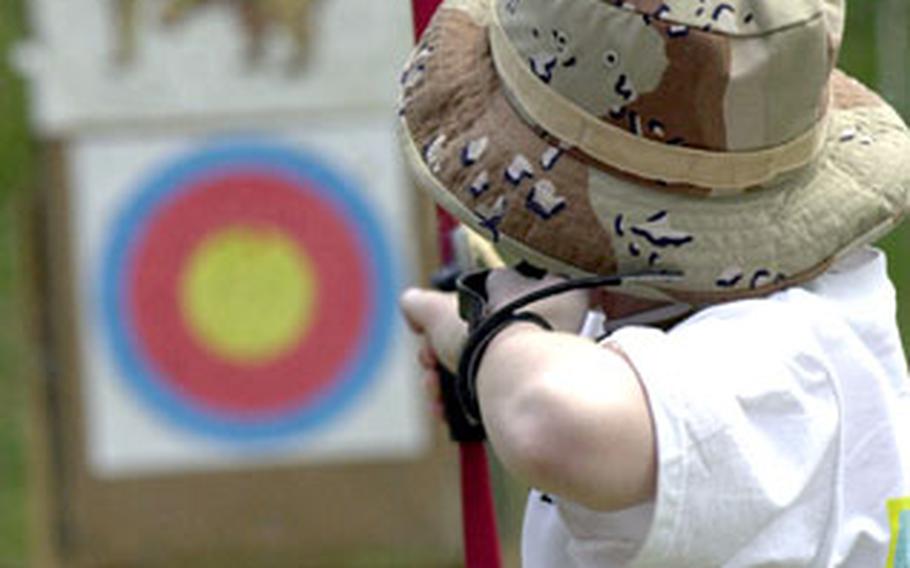 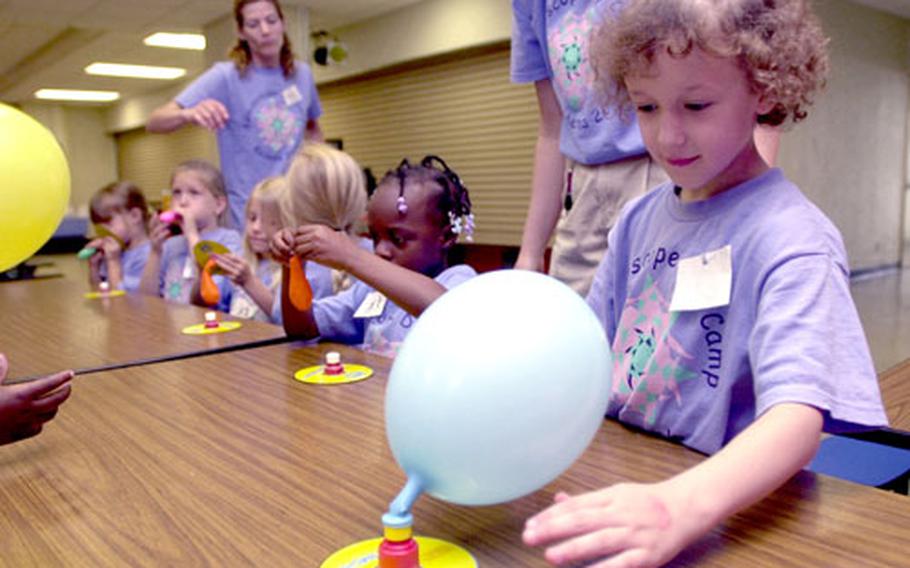 Shaina Franklin, a 6-year-old Brownie Scout, turns a CD into a floating disk during the Girl Scouts’ Kaleidoscope Day Camp at Bob Hope Primay School on Kadena Air Base. The theme of the girls camp was science. (Fred Zimmerman / S&S) 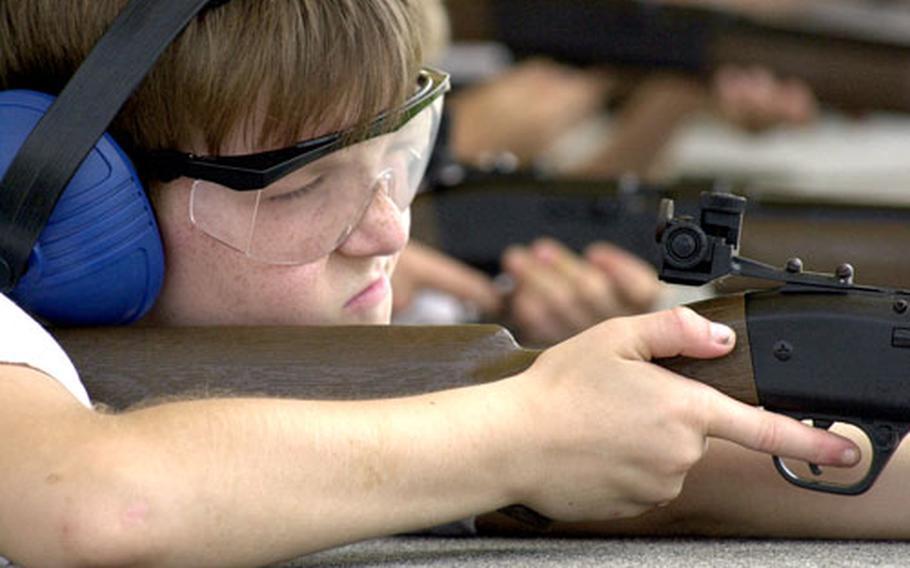 Peter Trusty, 9, a Bear Scout, aims his BB gun Wednesday during the Boy Scouts’ spring break camp in Kadena’s Plaza Housing area. The theme of the camp was “Legends of Sherwood Forest” and included archery, arts and crafts and games. (Fred Zimmerman / S&S) 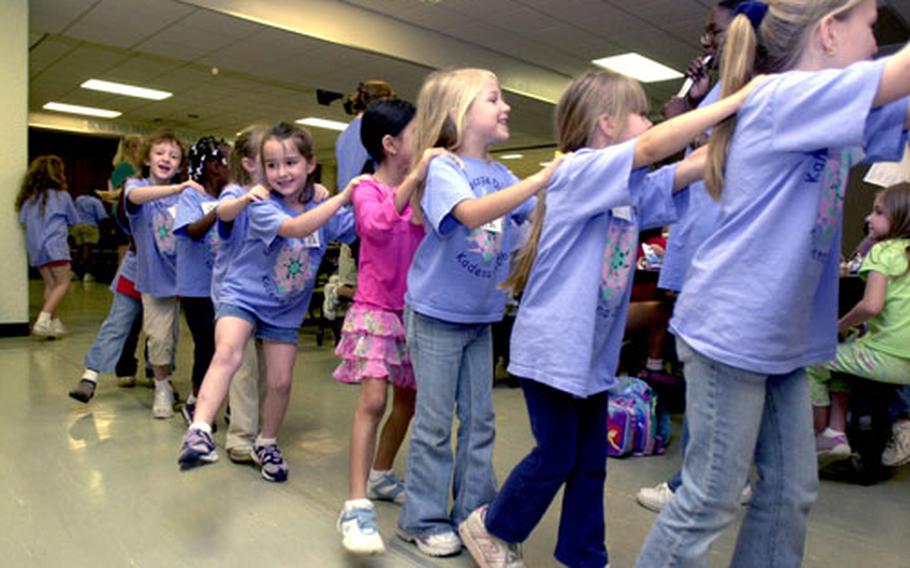 Girls dance in a conga line as they move from one station to another during the Girl Scouts’ Kaleidoscope Day Camp. (Fred Zimmerman / S&S) 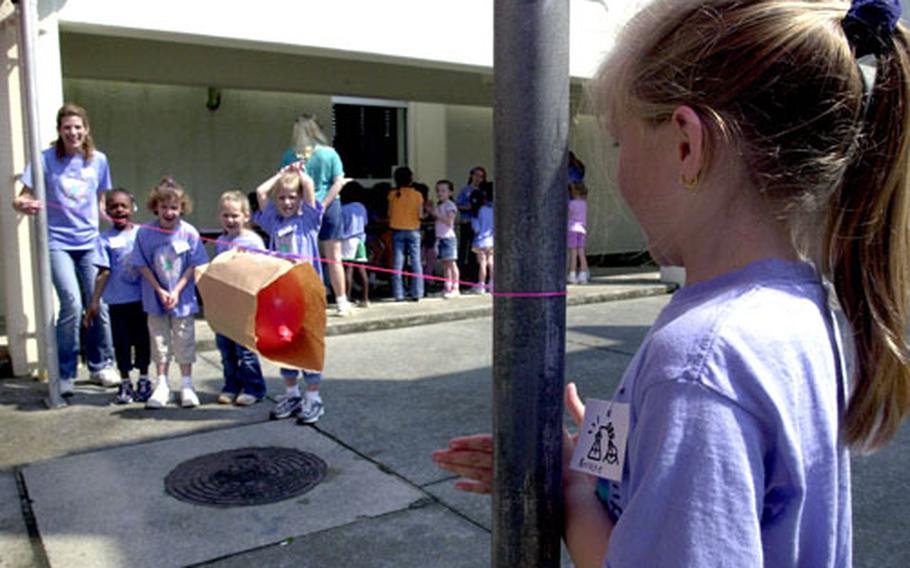 KADENA AIR BASE, Okinawa &#8212; While most kids think an ideal spring break is relaxing on the beach or playing video games, nearly 250 Okinawa youths spent their week attending Scouts camp instead.

The Girl Scouts&#8217; Kaleidoscope day camp was at Kadena Air Base&#8217;s Bob Hope Primary School, while the &#8220;Legends of Sherwood Forest&#8221;-themed Boy Scout camp was held in the Plaza Housing area. The camps ran Monday through Thursday, with about 100 girls and 145 boys attending, respectively.

The Girl Scouts&#8217; camp theme was science, according to camp director Amy Withrow, and the girls did everything from making &#8220;glop&#8221; &#8212; mixing chemical elements to form a new compound &#8212; to learning how electronics work through &#8220;reverse engineering&#8221; &#8212; taking pieces apart. Each day the Girl Scouts, in kindergarten through sixth grade, spent 30 minutes at eight different learning stations.

Camp co-director Maria Lonergan said the focus was on science because &#8220;girls don&#8217;t get that much science, and a lot of groups are gearing more women towards science. We have some budding scientists here and we&#8217;re opening up their minds to something new.&#8221;

Brownie Scout Corina Withrow, 7, said it would have been fun to spend spring break playing with friends, but camp was where she wanted to be. Her favorite activity, she said: &#8220;Making Flubber (a mixture of water, Borax and glue) &#8230; I made it stretch out as far as two tables.&#8221;

While the girls worked on science projects, the Boy Scouts, in first through fifth grades, were outdoors doing everything from archery to cooking classes. The boys had a total of six stations, spending 45 minutes at each, said Arnaldo Vincenty, camp program director.

This was the second camp for 8-year-old Timothy Ware, who said his favorites were archery, shooting BB guns and making a catapult during an arts and crafts session.

While the week was filled with fun for all, the Scouts also were taking care of business.

&#8220;In order for them to crossover [to the next Scouting level], they have to fulfill certain requirements,&#8221; Vincenty said. &#8220;Part of this program is to help them achieve those requirements.&#8221;

The boys were able to receive &#8220;belt loops&#8221; and &#8220;pins&#8221; for completed activities during the week, Vincenty said. The Girl Scouts also earned badges from some of their camp activities, Amy Withrow said.