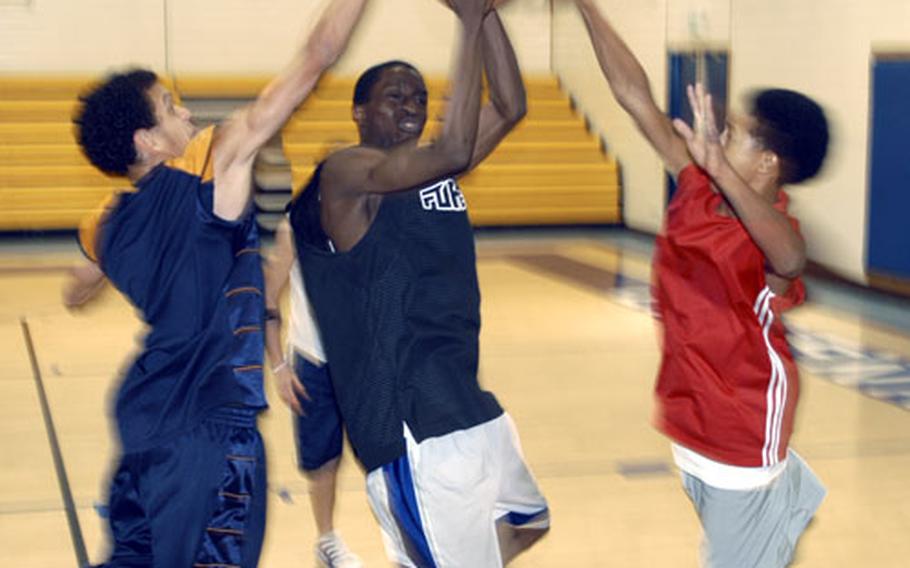 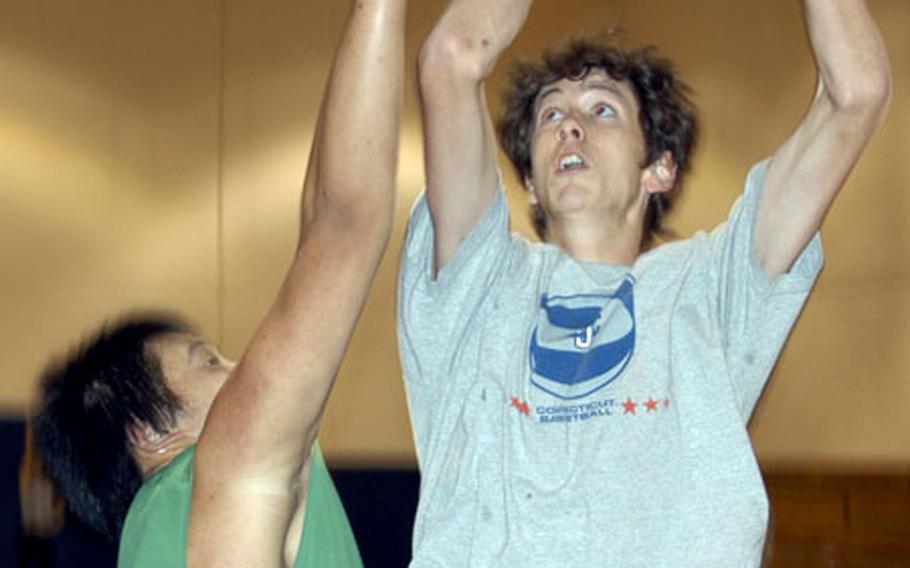 Alconbury Dragons forward Cristian Felice, right, practices last week with Yul McGrath. Felice, who also plays center, will have to step up more this year if his squad is going to make another appearance in the Division III tournament finals. (Geoff Ziezulewicz / S&S)

While winter seems to be arriving a bit late in the United Kingdom this year, basketball is already in the air.

The pros are doing their thing, college hoops are under way, and the U.K.&#8217;s four Department of Defense Dependents Schools high school boys basketball teams are lacing up their sneaks and hitting the court.

Lakenheath: Only one way to goThe only way for the Lancers to go is up. They won only one game last season, and coach John Gilmore said this year he&#8217;s focused on playing small ball against the other Division I teams.

Gilmore said it&#8217;s important for his undersized team to set the pace and not let other teams dictate how the games are played.

Gilmore will look to junior guard Eddie Alford and senior forward Karl Snapp for leadership on his largely young team.

London Central: A lot of talent lostThe Bobcats, 14-1 during the 2005-06 regular season, are coming off a year that saw them win the Division III-North conference and advance to the quaterfinals of the D-III European tournament before losing to Sigonella (Italy).

Much of that effort was led by David Marbury, a forward who averaged 16 points and 10 rebounds last year and was named to the D-III All-Conference team. During the D-III tournament, he was even better, averaging 23 points and 11 boards, and making the All-Tournament team.

Marbury, now a senior, will have to step up and lead even more this year, coach Alan Campbell said. He is one of only three returning lettermen &#8212; Frank Augusto and Michael Regan are the other two.

&#8220;We lost a lot of talent to graduation and [permanent change of station] moves,&#8221; Campbell said. &#8220;The new players on the team will have to learn our system as quickly as possible and we will need some of the younger players to come in and play like seniors right away.&#8221;

Campbell said he has faith in his players to go out and play hard &#8212; game in and game out.

Menwith Hill: Hungry underdogsBeing a team located in basically the middle of nowhere gives the Mustangs a competitive chip on their shoulders, coach Pete Resnick said.

But that underdog status gives the boys some hunger, he said.

The Mustangs, who finished 4-12 last year, will be led by a pair of forwards who both played guard last season. Greg Puccetti, a sophomore who averaged 11 points a game last year, and junior Le&#8217;Shawn Adams, who averaged 13, are both decent shooters who attack the basket.

The Mustangs share time on the only basketball court on base, so practice is condensed to about 90 minutes a day, Resnick said.

Alconbury: Renewed chargeThe Dragons, who lost in the final of last season&#8217;s Division IV European tourney, lost much of their core during the off-season.

Behr also said that freshman Araus Brown, about 6-feet, 3-inches tall, should bring some frontcourt oomph to the team.

Behr said he will emphasize running and making sure his boys have enough gas to finish each game strong.

And the memory of that D-IV tournament finals loss last year will also be a motivator, he said.