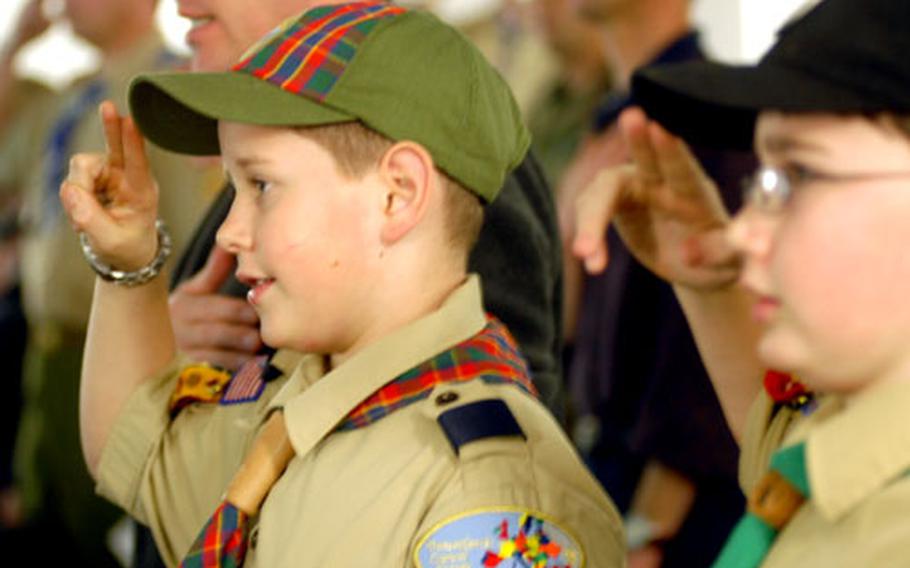 Webelos members Taylor Portman, left, and Michael Lowder stand at attention at the Boy Scouts Troop 12 Court of Honor ceremony Monday at Ramstein Air Base in Germany. Webelos, who are Cub Scouts, are required to attend several Boy Scout events before joining the group themselves. (Ben Murray / S&S)

KAISERSLAUTERN, Germany &#8212; Boy Scouts of America leaders in Europe say they are having little trouble finding new, private sponsors for their troops after a legal settlement ordered military units to sever official ties with the scouting program.

Scout masters and regional leaders said veterans organizations such as the American Legion, the Veterans of Foreign Wars and local unit booster clubs have stepped in as troop sponsors, Dan Adams, executive director of the BSA&#8217;s Transatlantic Council, said Wednesday.

In November, the Department of Defense told units not to sponsor Boy Scout or Cub Scout troops to comply with a legal settlement. The DOD settled with the American Civil Liberties Union, which challenged the direct government sponsorship of the Scouts because of the organization&#8217;s requirement that troop members recite an oath of duty to God.

In Europe, military units charter 80 percent of scout troops, Adams said. More than 400 scout troops worldwide are affected by the restriction. About 200 of them are in the Transatlantic Council&#8217;s region, which spans from Europe into North Africa and Turkey.

A DOD policy letter restricting government sponsorships of troops was sent just weeks before some European troops were scheduled to complete their annual re-chartering process, but Scout leaders adapted quickly.

Turnbull said the administrative changes will have little effect on individual troops, who simply will continue their activities under their new sponsors.

Scouts can still use military facilities for their functions and meetings, leaders said. Servicemembers also are still allowed to volunteer with the Scouts in their free time, the DOD policy letter said.

&#8220;It&#8217;s just a matter of changing the paperwork, and everything will be fine,&#8221; said Bob Schmidt, senior executive for the Scouts&#8217; Charlemagne District, which covers territory from the Netherlands to Morocco.

Many troops are following the path of Ramstein&#8217;s Troop 12 to find new sponsors.

Pat Hanlon, Horizon District commissioner and registrar for the BSA&#8217;s Transatlantic Council, said, if a private organization can&#8217;t be found, Scouts&#8217; parents can create their own chartering group. Hanlon and Schmidt, however, said scout troops in their districts have reported little problem finding new sponsors.

&#8220;I think it&#8217;s not going too badly,&#8221; said Meg Barrett, a Cub Scout committee chairperson for Pack 44 in Stuttgart, Germany. Her troop and others in the Stuttgart area already have made headway in securing a new sponsorship, she said.

Ian Nicholls, scoutmaster for Troop 232 out of Ramstein, said his group has yet to find a new sponsor. But he didn&#8217;t think his program is threatened.